caps rally back, but can’t close out lightning 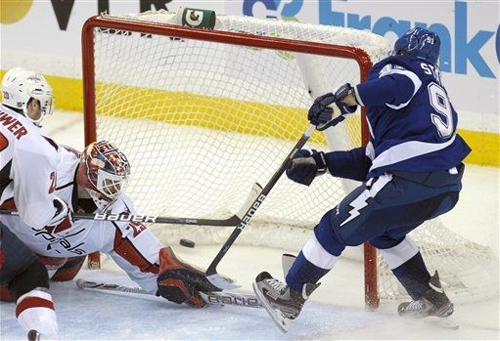 While it was nice to see the Capitals get a point in a road game, Washington’s 4-3 overtime loss to the Tampa Bay Lightning wasn’t all that enjoyable.

Sure, Washington was just 8-13-2 on the road to begin and was without the services of Alex Ovechkin, Nicklas Backstrom and Mike Green as they faced a talented divisional rival after a lengthy layoff.

Just don’t count me among that group of fans.

Because Washington’s first game after the all-star break was just more of the same of we’ve been what subjected to all season long.

The Capitals were at times good, but are rarely ever great these days.

They struggle to create quality scoring chances, the powerplay is still abysmal and they never have any sort of a margin for error. One screw up* and this team’s chances at victory essentially go out the window.

*Like say, a past-his-prime defender tripping over his own feet ensuring the opponent has a clear one-on-one breakaway against your goalie. Moments like that will always be huge momentum swings over the course of a game and Roman Hamrlik’s moment in the spotlight wasn’t a pretty one.

But my biggest issue with the Capitals these days is the fact that they’re simply incapable of putting together a full 60-minute effort anymore.

The Caps looked great in the early stages of the game – with the grinders dictating play and keeping the puck in the offensive zone for shifts at a time.

Hell, the Capitals even took an early lead – not something they’ve done a ton of this season – on a great hustle play by forward Brooks Laich, who hit the deck to slide the puck to forward Matt Hendricks.

Hendricks, who hasn’t contributed much of anything this season in terms of offense, was clearly caught off guard by his sudden one-on-one breakaway against Lightning goalie Mathieu Garon and whiffed on his initial shot attempt.

Thankfully though, Hendy stuck with the play and somehow got off a twisting backhanded shot that caught everyone – Hendricks included – completely by surprise. The puck found its way into the back of the net and the Caps were on the board.

And then the Caps fell asleep for a while, as they’re prone to do this season, and Tampa Bay had no trouble taking advantage.

The Lightning’s first goal came when a forward half-assed it while back checking Teddy Purcell. It might come as a surprise, but standing in the vicinity of an opponent isn’t the same as actually playing defense.
Forward/douchebag Steve Downie made a heads up play and put a perfect pass on the tape of Purcell’s stick, but you’d still like to see someone put a body on a forward who is crashing your net.

Let’s just say that watching undersized forward Mathieu Perreault attempt to play defense on this particular play did nothing to inspire confidence.

And yet, it was a helluva lot better than Hamrlik falling down while attempting to skate backwards.* The last time he looked that bad was when Ovechkin abused him as he bounced the puck off the boards, spun around Hamrlik and then scored a goal from the seat of his pants.

*Don’t you dare tell me Hamrlik was tripped or Tampa was offsides on the play. Those are piss poor excuses for a guy making $7 million over the next two seasons. The 37-year-old was on the ice for three of the four goals against, and likely would have been on for the overtime tally as well had his coach not essentially benched him.

It was nice to see the Capitals rally back from a 3-1 deficit, just like it was nice to see hard working players like Hendricks, Perreault and Troy Brouwer score goals. But there are still plenty of concerns with this team as presently constructed.

Even after a lengthy layoff, you should never have trouble finding motivation against a divisional rival – especially one who swept you in the playoffs last season, which was the beginning of the end for the Bruce Boudreau-led Caps team we came to know and love.

But in the late stages of the first period and the first half of the second, Washington let off the gas and paid for it.

It’s unreasonable to expect a team to be able to keep momentum going after a week-long break, but it sure would have been nice to see the Capitals storm out the gate and build off of last week’s satisfying 5-3 victory over the powerhouse Boston Bruins.

Unfortunately that’s been the case all year for Washington – they’ve simply been unable to put together a string of quality performances in a row. Considering they’ve now played 49 games this season, that’s probably not a good thing.