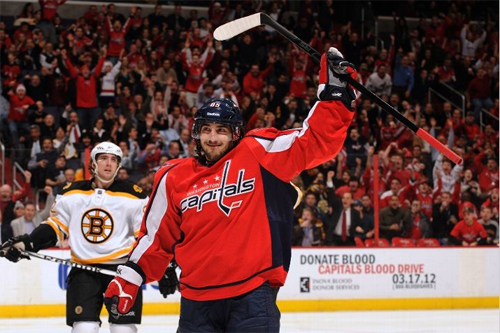 As you’ve no doubt heard by now, Washington Capitals captain Alex Ovechkin was suspended three games for a hit on Pittsburgh defenseman Zbynek Michalek in Sunday’s 4-3 overtime loss to the Penguins.

Although no penalty was called at the time, Brendan Shanahan, the NHL’s head disciplinarian, saw fit to sit The Great 8.

“The moment Ovechkin launches himself into the air prior to the hit he becomes responsible for any contact to the head,” Shanahan said.

While it was disappointing to see the NHL suspend Ovechkin, I can’t pretend to be surprised by Shanahan’s decision. In his eyes, Ovechkin is a repeat offender (he was suspended twice during the 2009-10 season) who should know better.

With Ovechkin off for an impromptu vacation, it means the Capitals – who continue to fight with several other middle-of-the-pack teams for a playoff spot – obviously need a player or two to step and fill the void. Especially since Ovechkin isn’t the only top-tier player out of action these days.

Top-line center Nicklas Backstrom is still out of action due to a concussion and top defenseman Mike Green remains out of the lineup as he deals with a groin injury.

Think about that for a second – in a season in which the salary cap stands at $64.3 million, Ovechkin, Backstrom and Green account for roughly $21.5 million.

When three players eat up a third of your total salary cap space, you’re obviously expecting them to be your workhorses and carry the proverbial load for your team day in and day out.

Conversely, when three of your four highest-paid players are out of the lineup, it’s safe to say your team is typically in trouble.

That, of course, was the backdrop as the Caps took the ice against the Stanley Cup champion Boston Bruins.

While the sweaters remained the same, the players wearing them for the home team looked a lot more like the Hershey Bears than the Washington Capitals we’ve come to know and love.

On the surface, there was little reason for optimism heading into this one. The Bruins have been in beast mode all season long.*

*Case in point: their 15-6 record on the road was better than most team’s home record and they had scored 168 goals while only allowing 97 for the season. That’s pretty good.

And yet, I was more excited to see this game than any other since Dale Hunter took over as the new coach. Why?

As you know by now, the Capitals captured an improbably 5-3 victory over Boston thanks in large part to the stellar play of center Mathieu Perreault – who had the best game of his career.

Perreault is a scrappy 24-year-old who has played in 86 NHL games. Even if he played against a team of middle schoolers, it’s not a lock that he’d ever be confused for the biggest guy on the ice, but for one night Drummondville, Quebec native did his best Dino Ciccarelli impression.

Perreault picked up the first hat trick of his young career, but that’s not the entire story. He also led the team in shots (with five), in penalty minutes (with four) and even added three hits for good measure (tied for second most on the team).

In short, the second-year pro did anything and everything he could to put his team in position to defeat one of the best teams the NHL has to offer.

He might have been grumpy with the high sticking call he was whistled for, but I loved it. Not because Washington had to play a man down for two minutes, but because, as he put it, all 5-foot-8 of Perreault went toe-to-toe with Boston’s hulking defenseman Zdeno Chara.

Perreault is a foot shorter and roughly 75 pounds lighter, but he refused to back down against one of hockey’s biggest and most intimidating players. At that moment, he was every bit as feisty as Ciccarelli was during his Hall of Fame career.

Best of all, he was every bit the blue-collar player Hunter needs for this system to be successful. Perreault and friends didn’t feel sorry for themselves as they took on a Bruins team that ranks first in goals scored per game (3.5) and fourth in goals against (2.1).

They just grabbed their proverbial lunch pail and put in the work needed to remain competitive. And for my money, the goal of the night was Perreault’s last tally.

Everything about that goal brought a smile to my face – starting with the lunging save by defenseman Roman Hamrlik at the blue line to keep the puck in the offensive zone.

Once he was able to do so, the veteran defenseman fired the puck in the general direction of the Boston net. At the same time, Perreault saw what was going on and simply crashed the net.

It was anything earth shattering, but it’s something the finesse Capitals haven’t always been known for. And Perreault’s willingness to do so was rewarded with a tap-in goal that sent the Verizon Center into a frenzy.

The Caps earned two points on a night when most people hoped they would simply be able to keep the game close and, for one game at least, executed Hunter’s system to perfection.

Washington still doesn’t get as many shots on net as you’d like, but they were the more physical team (outhitting Boston 30-16) and played defensively responsible (finishing the game with 21 blocked shots).

While Perreault finished the night with three goals, the rest of the offensive output came courtesy of rookie forward Cody Eakin and all-star defenseman Dennis Wideman. Of the three, Wideman is the only player who might actually be six feet tall.

Otherwise, the Caps were led by their mighty midgets who more than made up for the lack of firepower in Washington’s shorthanded lineup. It’s unfortunate that the all-star break is upon us and the Capitals won’t be able to build off of this momentum.

Because if the entire roster continues to buy in to what Hunter is trying to sell them, then this team might actually be salvageable. I still think management needs to make a move or two between now and the trade deadline,* but there’s no denying that this victory over the Bruins was easily the most satisfying win of the season.

*Like trading Alexander Semin for a bag of pucks.

And who knows? Maybe the Caps continue to find a way to win without the presence of their big-name players.

If so, maybe that’ll be what the front office needs to see in order to believe this team can survive without star-laden roster – especially if some of the top-tier players don’t show the same level of eagerness to get with the program.

But enough about that.

For one night, the Caps absolutely resembled the team’s long-time identity. They didn’t have the biggest names on the ice, but they were more than happy to roll up their sleeves and put in the dirty work necessary to compete.

That alone is cause for celebration as the current squad continues to try and find its identity.