the window has closed on these capitals 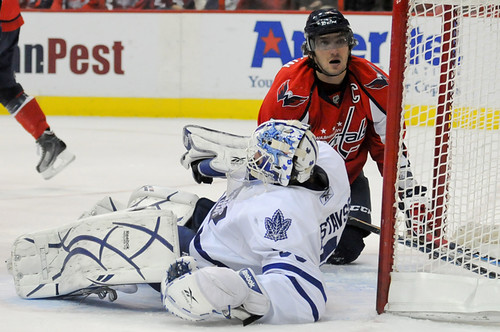 Growing up, the Washington Capitals were the epitome of a blue-collar team.

They never had the biggest names in hockey, but they earned respect thanks to their desire to outwork and outhustle opponents into submission.

While our nation’s capital will never be confused for a blue-collar town, that lunch pail mentality served the franchise well as the team qualified for the postseason 14 consecutive seasons – starting with the 1982-83 season and running through the 1995-96 campaign.

The Capitals typically lost in the first round of the playoffs, but the bar was set low enough locally that simply qualifying for the postseason was good enough to keep most fans happy.

And then there was the 1997-98 season, where everything came together for the Caps in a perfect storm of skill, determination and a lot of luck.

Goalie Olaf Kolzig, playing some of the best hockey* of his stellar career, backstopped the team’s run to the Stanley Cup Finals and for a brief moment it seemed like the Capitals might actually be capable of shocking the hockey-watching world.

Unfortunately, the Detroit Red Wings never got the memo and any dreams of seeing Peter Bondra raise the most storied hardware in all of sports were snuffed out in a hurry.

After 24 seasons of good, but rarely great hockey, the Capitals had finally elevated their play to hockey’s grandest stage – only to get steamrolled by a franchise that has drank from Lord Stanley’s Cup 11 times.

*Even after being swept by Detroit, Kolzig finished the playoffs with a 12-9 record, a 1.95 goals against average, a .941 save percentage and four shutouts. That’s called getting it done, boys and girls.

And yet, although Washington suffered a beatdown in the finals, most Caps fans were just thankful for the experience. When you root for a team with little to no expectations, you’re able to celebrate the victories and brush off the setbacks easier than most.

Fast forward to the 2003-04 season when Capitals owner Ted Leonsis and his general manager, George McPhee, took a critical look at their roster and came to the gutsy decision to blow it all up and start over from scratch.

By their own admission, Leonsis and McPhee saw a team that was good enough to make the playoffs each year, but wasn’t much of a threat to do anything once the postseason began.

The new regime refused to accept mediocrity, so they traded away aging veterans to stockpile young prospects and draft picks while bracing for a painful rebuilding process known simply as “the plan.”

They openly admitted to anyone and everyone that the process wasn’t going to happen overnight and it might even get ugly at times, but they promised it would be worth it in the long run. And, as we all know by now, the move paid off.

Thanks to the decision to embrace a full-fledged rebuild, the Caps were in a position to land a franchise cornerstone like Alex Ovechkin, as well as top-end players like Nicklas Backstrom, Alexander Semin and Mike Green.

With a nucleus of these “young guns” and a loveable coach named Bruce Boudreau, the Capitals entered a golden age – reaching heights that were previously unthinkable in Washington.

Regular season victories and individual accolades rained down on Ovechkin and friends, and suddenly, hockey games were the trendy place to be in an admittedly fair-weather town.

Every time they took the ice, the Capitals played in front of a rowdy sellout crowd. Their excited run-and-gun style of play made even the most mundane games must-see TV and in turn, ushered in a new generation of hockey fans.

While the other teams in town continued to toil in mediocrity, the Capitals were viewed as one of the NHL’s elite franchises and heralded as one of the handful of teams who could legitimately win a championship.

Unfortunately for everyone involved, regular season wins never translated to postseason victories, and once again the Caps were good enough to make the playoffs, but unable to do anything once they got there.

Even though the Capitals entered the playoffs as the Eastern Conference’s top seed on more than one occasion, too often they failed to maintain momentum and season after season ended in disappointment.

Desperate to get his team over the proverbial hump, Boudreau embraced a less offensively aggressive and more defensively responsible mentality that his players never truly bought into.

Something about seeing the cool teacher in your school suddenly turn into a disciplinarian seemingly overnight rang hollow to too many of the young men in the Washington locker room and suddenly the team lacked an identity.

A team that was built to trade goals with anyone no longer scored goals with ease. And while the team was slightly better on defense, they didn’t exactly transform into a lockdown defensive juggernaut either. Just like that the Caps went from the hottest ticket in town to a team hoping to bore their opponent into submission with a 2-1 win every night.

While the blue-collar mindset has been the identifying trait of Washington Capitals hockey for the bulk of the franchise’s existence, it’s not what this collection of players was brought here to do.

Digging for loose pucks in the trenches and crashing the net came naturally for years, but the message largely fell on deaf ears as the players eventually stopped responding to Boudreau.

Once that happens, changes have to be made and even though Boudreau accomplished more than any other coach in Caps history, he was fired in November and replaced by former captain Dale Hunter, who might as well be the posterboy for blue collar workers everywhere.

There’s just one problem – these players still aren’t best suited for that particular style of play.

On most nights they give it a try, but it definitely doesn’t come naturally. So what you see is long stretches of the team trying to get the puck out of their own zone followed by an abbreviated rush up the ice that ends with a long-range shot that either misses the net completely (also known as an Alexander Semin shot from the point) or is easily saved by the opposing goalie.

These days, Washington can go an entire period without putting together a legitimate scoring chance, and once again fans are left hoping for a grind-it-out 2-1 victory.

On nights when the Caps goaltenders are up for the challenge, the team is typically in decent shape. When they’re not (or if the team is playing a game on the west coast), it gets ugly.

When you’re living and dying with such a small margin for error, you’re no longer able to stake your claim as one of the league’s elite.

In related news, if the playoffs started today that Capitals would barely even qualify as the eighth seed. Through 47 games played the team has 25 wins and 22 total losses. They’ve scored 131 goals while giving up 134.

There’s no way around it – the Capitals are once again mediocre.

Sure, many of the names that ushered in the best days this franchise has ever known are still prominently involved, but at the end of the day we’re once again looking at a team that is good enough to make the playoffs, but has no chance once they get there.

In other words, the Caps have come full circle. We’re back to where things were when Leonsis and McPhee made the controversial decision to blow it all up and start over from scratch.

No one could blame the current regime if they sat on their hands and did nothing. Even though this team would need a miracle to win in the postseason, I could fully understand if Leonsis was content to let the cash roll in while his hockey team continues to play in front of a sellout crowd.

But if the plan has always been to bring this town a championship, at some point everyone involved is going to have to take that same critical view as they did back in 2003-04 and admit that the window has closed on these “young guns.”

From where I’m sitting, the only difference between this team and the one that Leonsis and McPhee blew up back then is that this one actually has expectations placed upon them. Otherwise, it’s back to square one for the Washington Capitals.