capitals suffer from a lack of identity 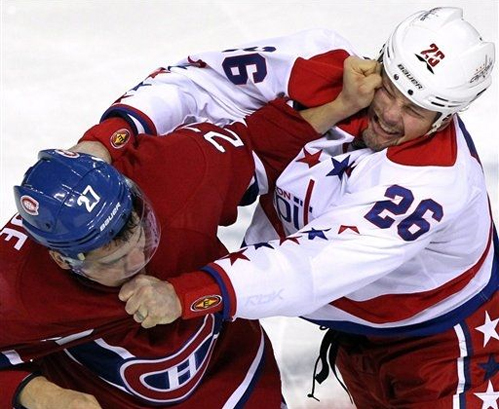 I’m going to be completely honest with you – the Washington Capitals, at times this season, have been painful to watch.

Take, for example, the team’s pitiful effort at home in a 3-0 loss to the New York Islanders Tuesday night.

After 60 minutes of uninspired hockey by the home team it was tough to tell which team was tied for the fewest points in the Eastern Conference and which team was fighting for first place in their division.

And then, 24 hours later, the Capitals responded with an impressive 3-0 road victory over the Montreal Canadiens that had me scratching my head.

Did the players in the Capitals’ locker room show up for the Montreal game because of their lackluster performance the previous night?

Was the team fired up because the game represented a chance for retribution against Rene Bourque – Montreal’s newly-acquired player who knocked center Nicklas Backstrom out of action with a cheapshot elbow to the head?

Or is this team just schizophrenic and there’s no true way of knowing what anyone is going to see on any given night?

At this point, each of those answers seems to make sense. But when push comes to shove, I’m more inclined to believe it’s the third option that fits these days.

This team, as best as I can tell, still lacks a true identity. They’re no longer a run and gun team hoping to win a shootout every night. They’re not quite the lockdown defense juggernaut they hope to someday become.

Instead, the Caps are essentially a team that rarely gets shots on net, has trouble scoring goals consistently and almost never gets sustained pressure on an opponent.

How does a team earn a shutout victory on the road and still manage to leave a sour taste in your mouth? It probably has something to do with being limited to just 16 shots on net.

Against the Islanders, eight Washington players were held without a shot and six more had just one paltry shot on goal.

Against Montreal, six players were unable to register a single shot, while eight players had a single shot on net.

In fact, no player had more than two shots on goal against the Canadiens and captain Alex Ovechkin managed just one shot* for the entire game.

*Considering Ovechkin scored the one time he managed to put a shot in the general direction of Habs goalie Carey Price, it’s inexcusable that the $100-million man wouldn’t or couldn’t get another shot on target the rest of the evening.

Although Ovechkin averages more than five shots a game for his career, he’s failed to do so in each of his last eight games. Let’s go ahead and make it a priority to get him back on track.

The other glaring deficiency with this team as current comprised is the lack of a backbone. When Backstrom, who has been your best player all season long, suffers a concussion because of a cheapshot, it’s on his teammates to make Bourque pay.

Not a month later. Not a week later. Not even a shift later. Right then and now, whoever is on the ice should be making it perfectly clear that they have their teammate’s back.

Seeing grinder Matt Hendricks drop the gloves with Bourque less than two minutes into the Montreal game did nothing but anger me. It was an empty gesture aimed at showing a dirty player his actions wouldn’t be tolerated, but in truth, the non-reaction back on Jan. 3 spoke much louder.

If this team is going to take coach Dale Hunter’s identity and play with an edge while fighting for pucks in the trenches, then they’re certainly going to have to grow a pair and step up when someone like Bourque takes liberties on a talented player like Backstrom.

Hunter played with such a mean streak that he was willing to annihilate an opponent while he was celebrating after scoring a goal. These players are all too content to stand around while opponents bulldoze their goalie or throw malicious elbows away from the play.

Knowing what I know about Hunter, that’s not going to bring a smile to his face.

I fully understand that shifting from Bruce Boudreau’s wide open style of play to Boudreau’s defensively-responsible philosophy to a hybrid of the two to Hunter’s grind-it-out mindset won’t happen overnight.

But it should still be noted that the Caps entered the Montreal game with the same 12-9-1 record under Hunter as they had under Boudreau when it was finally decided that he could no longer remain employed in Washington.

The only difference now is that the Capitals are unable to get the puck on net with any frequency.*

So unless goalies are going to allow the Caps to score on two of the first four shots of the night like Price did, the Caps are basically stuck hoping either Tomas Vokoun or Michal Neuvirth is able to stand on their respective heads if the team is going to remain competitive.

At some point, the question has to be asked – are these players best suited to run this particular offense? And if the answer is no, then something has to give between now and the trade deadline.

Capitals general manager George McPhee turned over the bottom quarter of his roster during the offseason and fired his coach back in November.

If the Caps continue to mire in mediocrity will GMGM be willing to make the tough decision to pull the trigger on a deal involving players on the top end of the roster? Or will he ultimately sit on his hands and watch this team fade out of the playoff picture as another season ends in disappointment?

That, my friends, is the $100-million question.