redskins can learn a lot from 49ers 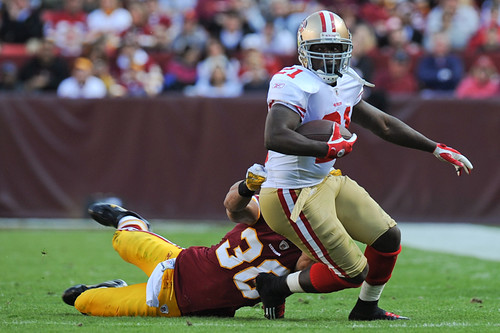 Hello friends. Sorry for the lack of posts over the last week, but I was out of town and had very little access to the internet.

On the plus side though, I had the pleasure of spending a week out in San Francisco and was more than happy to enjoy a week of fantastic weather and playoff football.

While much of the east coast was stuck dealing with cold and rainy weather, I was loving life while rocking short sleeves as the temperature never dipped below 60 degrees.

If that wasn’t enough, I was also fortunate enough to be in a city that was absolutely ecstatic over hosting a playoff game.

Considering how rare home playoff games are here locally, it was a sight for sore eyes to see everyone wearing their favorite jerseys, etc. in the days leading up to the San Francisco 49ers hosting the New Orleans Saints.

Although I had little rooting interest in the 49ers prior to the Saints game, it was nearly impossible to not get caught up in the sense of pride shown by seemingly everyone I ran into.

And the more I looked into the 49ers, the easier it was to get behind the team as it is presently constructed.

After watching Washington’s front office ignore the NFL Draft for more than a decade, it’s tough to see a team like the 49ers that was clearly built by drafting a developing young talent.

Since 2005, the 49ers have drafted a mind-numbing 60 players. The Redskins, conversely, had selected just 51 – and that number is inflating because last year’s 12-man draft class.

San Francisco’s smallest draft class during the last seven years was in 2008, when the team selected just six players. And yet, all six players are still in the NFL.

Washington’s smallest draft day haul came in 2007, and only safety LaRon Landry (who a large chunk of Redskins fans are done with) is the sole remaining player of the five guys drafted.

Taking a step back, it’s even tougher when you realize how many of their core players came via the draft.

In short, this team does as well as anyone when it comes to identifying young talent – especially in the first round.

Sprinkle in a few smart free agent signings like defensive lineman Justin Smith, kicker David Akers and cornerback Carlos Rogers and San Francisco has got a roster as deep as any in football.*

*In related news, the 49ers have eight players who were voted to the Pro Bowl. No team in the NFL had more.

This is why a first-time head coach was able to walk in the door and immediately find success. This is how a team that hasn’t made the playoffs since 2002 suddenly gets it all together and goes 13-3.

But what I love most about the 49ers is that in the day and age of pass-happy offenses, they’re still a throwback to yesterday’s NFL. This team was built to run the ball and stop opponents from running the ball.

Head coach Jim Harbaugh knows he doesn’t have the best quarterback in the league, but he’s confident that Smith can do well enough in his system to get the job done while Gore and the defense typically do the heavy lifting.

And if Smith has a career day, like he did against the Saints last week, then that’s an added bonus. But a top-ranked defense and a strong ground game ensure that the 49ers are in each and every game they take the field for.

Seeing the Redskins’ front office do so well last offseason – with a very successful 2011 draft and savvy free agent signings of under-the-radar players like Barry Cofield, Stephen Bowen and Chris Chester – gives reason for hope that this is a new day at Redskins Park.

As long as the owner maintains his current “hands off” approach and trusts that Mike Shanahan is going to eventually get this franchise back to relevance, I’m confident in the people making the decisions for the burgundy and gold.

My hope is, those folks take a good, hard look at the San Francisco 49ers this weekend as the host the NFC championship game and do what they can to try and follow their blueprint.

Because if they do, then hopefully it’s only a matter of time before the Redskins actually find themselves back in the postseason picture and the team might – heaven forbid – actually host another playoff game.