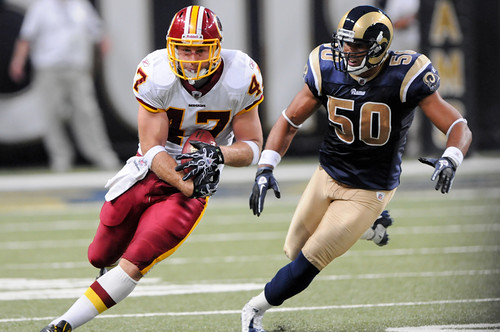 Once again, the NFL playoffs are in full effect while the Washington Redskins are left on the outside looking in.

Because the franchise has just one playoff victory over the last decade, you’d think this would get easier to swallow, but that’s never the case.

With losses far outnumbering the wins in Washington, it’s not unreasonable to think that management might try to cut corners during a slow and painful rebuilding process, but mercifully, it appears those days are a thing of the past.

Instead, head coach Mike Shanahan appears to be attempting to build legitimate depth the old fashioned way – focusing the bulk of his energy on the NFL Draft as the primary method of acquiring talent while judiciously utilizing trades and free agency to round out the roster.

Seeing the front office target younger, cheaper talent as opposed to chasing the biggest names in free agency was a pleasant surprise last offseason, and the hope is that trend continues again this time around.

Before the Redskins can turn their attention to this year’s crop of free agents and college standouts who will enter the draft though, Washington must first make some tough decisions in-house.

Namely, which of the team’s free agents are worthy of a new contract and which players it’s time to part ways with. Here’s my take on some of the players Shanahan and friends will likely focus on between now and the start of free agency in early March.

Phillip Buchanon, cornerback – There’s zero reason to believe Buchanon will be back next season. Not when the highlight of his 2011 season was sitting out the first four games while serving a suspension for a violation of the league’s substance abuse policy.

Dominique Byrd, tight end – Does it really matter if he returns?

Adam Carriker, defensive end – Carriker is a player the front office would like to have back, but whether or not that happens will hinge on his contract demands and what other teams are willing to pay him. Getting a healthy Jarvis Jenkins back in the lineup could make the 27-year-old expendable though.

Fred Davis, tight end – After hearing Shanahan’s comments, I fully expect Freddie Delight to be back in business next season.

“Fred made a mistake. We sat down and talked about his mistake. I do feel very good about Fred as a person,” Shanahan said. “I like the way he worked, I like his attitude. I like his development over the last year-and-a-half since I’ve been here. I think he’s had a complete change in the way he handles himself off the field, to preparing himself to be a consummate pro, to working out, and hopefully the mistake won’t happen that he made this year.”

London Fletcher, linebacker – When a 36-year-old racks up more tackles than any other player in football, it’s clear he’s still got a little something left in the tank. Shanahan has said repeatedly that bringing back Fletcher is a top priority and I fully expect the ageless wonder to be the centerpiece of Washington’s defense again next season.

Graham Gano, kicker – The sometimes shaky restricted free agent appears to have finished the season on solid footing – connecting on four of six field goals attempts from 50 yards or more (including a 59-yarder). I expect the 24-year-old to be around a little while longer.

Kedric Golston, defensive end – Golston is only 28, but it would surprise me to see the team go in a different direction.

Rex Grossman, quarterback – Will the Redskins leave the draft with the Heisman Trophy winner out of Baylor or will they roll the dice on the other RG3 — meaning a third season of Rex Grossman III? Jokes aside, it wouldn’t surprise me to see Grossman in a backup role next season.

Tim Hightower, running back – The 25-year-old wants to be back and provides solid pass blocking and leadership abilities. Coming off of a season-ending injury he’s not going to command a big payday, so Hightower will likely be back in town again next year.

LaRon Landry, safety – The smart move would be to use the franchise tag on Landry, who has finished each of the last two seasons on the injured reserve list. Spending roughly $6.5 million for one year to see if Landry can finally get healthy and be a dominant force on the football field makes too much sense.

Kory Lichtensteiger, guard – The team’s best run blocker on the offensive line should definitely be back next season.

Sean Locklear, guard – Maybe he could have returned if he knew how to keep his mouth shut. Now, there’s a better chance the team signs me to play on the offensive line than Locklear returning.

Rocky McIntosh, linebacker – Honestly, I didn’t think he’d be back in 2011. It’s even less likely McIntosh will be around to miss tackles in 2012.

Will Montgomery, center – Washington needs to upgrade the offensive line, but the team could still keep Montgomery around to provide some depth.

Donte Stallworth, receiver – There will be younger and cheaper options than the 31-year-old. Hard to see him back for a second season in the burgundy and gold.

Byron Westbrook, cornerback – He’s a restricted free agent who excels on special teams and hopes to return next season. The 27-year-old isn’t going to demand much in the way of salary, so it wouldn’t surprise me to see him back.

And here are a few other players worth watching:

Terrence Austin, receiver – The Redskins don’t exactly have the second coming of the Fun Bunch at receiver, and yet, Austin is rarely involved with the offense. Maybe he’s just not a Shanahan guy.

Oshiomogho Atogwe, safety – I think the team gives Atogwe one more season to show he can stay healthy and productive.

Brandon Banks, returner – Rule changes lessened the impact player of the return specialist and when he did have the ball in his hands, too often Banks underwhelmed. With upgrading receiver a priority this offseason, will the team still be content to use a roster spot on Banks? I’m not so sure they will.

Kevin Barnes, cornerback – Barnes is young and has plenty of upside, but it’s hard not to notice how little he was used the last few weeks of the season while the team opted to evaluate Westbrook.

John Beck, quarterback – It’s pretty clear that Beck is not meant to be an NFL starter (considering he has as many NFL wins as my wife does). The team might be content to keep him around as a backup – especially if they let Grossman walk, but I’d much rather they cut the cord on Beck and move in a different direction.

Jammal Brown, tackle – I’m a huge fan of Brown when he’s healthy, but he’s never healthy. I fully expect a player who is not on the current roster to be the opening day starter at right tackle in 2012.

Chris Cooley, tight end – Even though he’s had trouble staying healthy in recent seasons, and I still believe the fan favorite will be one of the last remaining holdovers from the pre-Shanahan era Redskins.

Reed Doughty, safety – Doughty is a quality human being, but upgrading the secondary should be a top priority.

Santana Moss, receiver – The 11-year pro is no longer a number one receiver, but the team could still get production from Moss by using him in a Wes Welker-like role. I think he’ll be back for one final season in Washington, but wouldn’t be shocked if the 32-year-old was let go.