ryan kerrigan is most valuable redskin 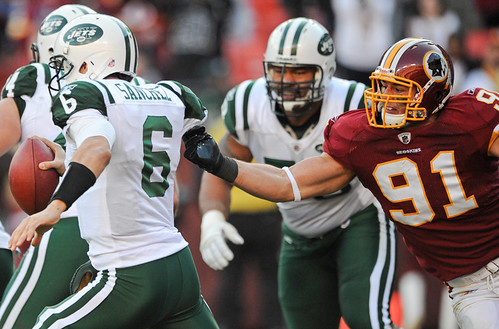 As I walked into the locker room of the Washington Redskins following the team’s season-ending 34-10 loss to the Philadelphia Eagles, I happened to catch a sincere moment between two teammates.

It was clear by the tone of the conversation that Fletcher is excited to see the Purdue standout build off of his impressive rookie campaign – which featured 7.5 sacks, four forced fumbles and an interception returned for a touchdown.

Kerrigan, who the Redskins landed with the 16th overall pick in the 2011 NFL Draft, made a strong case for defensive rookie of the year.

His chief competition for the award is Denver linebacker Von Miller, who finished with one more tackle (64 to 63), four more sacks (11.5 to 7.5), but had two less forced fumbles (two to four), zero interceptions and zero touchdowns.

Regardless of whether or not Kerrigan beats out Miller for the award, he’s my pick for the Redskins’ player of the year because of one amazing statistic – Kerrigan played every single snap for Washington this season.

Even though the lockout caused him to miss out on the organized team activities and minicamps that rookies are usually afforded, Kerrigan came into a brand-new 3-4 scheme for the first time and was still able to take the field on day one and never look back.

You figure a defense is typically on the field for about 60 plays a game. Over the span of 16 games, that works out to roughly 960 plays in a season. And if that’s how many plays the Redskins’ defense faced, then Kerrigan was on the field for all 960 of them – making him the only player on either side of the ball to play every single down.

“It’s not surprising to me,” Atogwe said in regards to Kerrigan playing every snap of the 2011 season. “Ever since he fell from planet Krypton he’s been making plays. He’s durable and he’s the man of steel, so I’m not surprised.”

Count Atogwe as another individual who feels Kerrigan deserves to be recognized for his outstanding rookie season.

“Ryan was spectacular from the first game to the last,” said safety Oshiomogho Atogwe. “He’s going to be a phenomenal player.”

Off the field, Kerrigan’s impact could be even bigger for Washington.

That’s because the front office, for the first time in recent history, was willing to trade down from the 10th pick to land the 23-year-old. He wasn’t acquired because of a flashy name or his ability to sell jerseys. Kerrigan was selected simply because he was the best player available who this regime believed fit with their system.

When Kerrigan picked off Giants quarterback Eli Manning in the season opener for a nine-yard touchdown to seal a Redskins victory, it was if the football gods had smiled upon the burgundy and gold for actually trying to build a football team rather than make headlines.

“That’s what they picked us here for,” Kerrigan said. “They brought us here to be productive and to be players who can contribute.”

While Atogwe believes Kerrigan was able to stay on the field for an entire season because of super human strength, the 6-foot-4, 263-pound linebacker wasn’t ready to go that far.

“God was looking out for me and keeping me healthy out there,” he said. “I was very fortunate that I was able to play every snap this season.”

Because the NFL season is a longer grind than anything college football has to offer, most rookies tend to hit a wall as the season progresses. Kerrigan though, feels he actually got better as the season unfolded.

Along the same lines, dropping back in coverage is another area Kerrigan wants to spend time and attention on during his first offseason.

“That’s just something that’s going to come with time,” he said. “I felt more comfortable doing that each week, and the more I do it, the more I’m going to feel better at it.”

While Kerrigan has already identified areas of his game to hone during the offseason, he’s still not exactly sure what comes next.

“I’m probably just going to ask around and see what some of the other guys do,” Kerrigan said. “This is my first offseason, so I don’t know how much time to typically take off. But it probably won’t be too long because I want to get this bad taste, after the last couple of weeks, out of my mouth.”

When Kerrigan was drafted, he was lauded as a high energy guy who had a great motor. He was considered a player with great conditioning who played just as hard in the fourth quarter as he did in the first.

After his first season in Washington, it’s easy to see why Kerrigan was one of college football’s most disruptive pass rushers throughout his career. The All-American left Purdue with 33.5 sacks and as the Big Ten’s all time leader in forced fumbles. Now, paired with Brian Orakpo, they make up one of the youngest and most formidable pass-rushing tandems in the NFL.

The Redskins have plenty of work to do this offseason to improve upon a disappointing 5-11 season, but the franchise appears to be in good hands with Kerrigan.

And if this is what Kerrigan is able to accomplish when running on adrenaline and instincts, Fletcher is right to believe the sky is the limit for this youngster. Either way, it looks like the Redskins have a special player on their hands with Kerrigan.

[Editor’s note: I stumbled across this video of Kerrigan wired up during the Vikings game that’s worth checking out.]