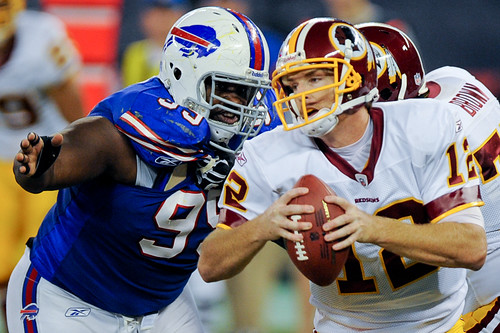 11. No Hawaii for London – Despite London Fletcher’s impressive season – in which the middle linebacker racked up an NFL-best 166 tackles, 14 quarterback pressures, three forced fumbles, two interceptions and 1.5 sacks – the 36-year-old will not be participating in the Pro Bowl this year.

In fact, the only person associated with the Redskins who earned a trip to the NFL’s glorified all-star game is cheerleader Abby, as Washington will not be sending a single player to Hawaii for the Pro Bowl for the first time since 1993.*

*Unless, of course, someone backs out due to injury, which is always a possibility.

Fletcher is a first alternate, behind San Francisco’s Patrick Willis and Chicago’s Brian Urlacher – even though his stats far surpass Urlacher’s this season. But this is what happens when your team goes 5-11.

So while it sucks for Fletcher, who absolutely deserves to be recognized as one of the league’s elite, it’s not exactly out of the ordinary for bad teams with abysmal records to miss out on positive recognition.

10. Mister Rogers New Neighborhood – Cornerback Carlos Rogers might have been Washington’s least appreciated players over the last decade. During his six seasons in D.C., he was a solid cover corner, but his hands were made of stone. Therefore, local fans only cared about how many would-be interceptions the veteran failed to haul in over the years, rather than accepting him for who he was.

Once head coach Mike Shanahan took over the keys to the franchise, it was clear Rogers’ days in D.C. were numbered. The 30-year-old signed a one-year deal with San Francisco this past offseason and has thrived in his new environment – picking off six passes, which puts him one behind the NFL lead.

To put that in perspective, Rogers had as many interceptions in one season with the 49ers as he did in his last five seasons in Washington combined.

And let’s not forget defensive end Andre Carter, who finished the season with 10 sacks in 14 games for New England after being let go by the current regime because he didn’t fit into their current 3-4 scheme. For better or worse, those two former mainstays remained highly productive even after they were deemed expendable.

9. Letdown in Landover – When the Redskins were blown out by the backups of a 2-14 Minnesota Vikings squad, it was the perfect storm of suck.

The loss was the team’s sixth straight at FedEx Field, which should be illegal. It was also another example of how this team loves to collapse in the rare occasions that they’re favored in a football game, and, worst of all, it was yet another defeat suffered at the hands of a rookie quarterback.

Yes, the Redskins have now lost eight-straight games to rookie quarterbacks dating back to 2006 (which might be the most depressing statistic in the history of modern sports). Add all of that up, and it’s pretty clear that right now, the Washington Redskins aren’t very good at football.

8. Losing Lichtensteiger – There’s no use making excuses, but the Redskins did suffer a ton of injuries this season. Like guard Kory Lichtensteiger. And tight end Chris Cooley. And running back Tim Hightower. And LaRon Landry. And receiver Leonard Hankerson. And defensive lineman Jarvis Jenkins. And so on.

It goes without saying that the team could have used all the help it could get this season, so losing that many players at so many key positions didn’t help matters.

7. No Longer Draft Dodgers – If nothing else, 2011 was a success for fans of the burgundy and gold because it represented the first time in recent history the team had a front office willing to actually apply itself during an NFL Draft.

Their willingness to act like a professionally run organization was rewarded with what is arguably the most productive draft class in two decades.

6. Getting Gaffney – Only 12 players on the roster were here before Shanahan’s arrival, meaning the coach obviously didn’t think highly of what he inherited. With that in mind, it’s been fascinating to watch the two-time Super Bowl winning coach build his kind of football team from the ground up.

All of these moves, coupled with the solid 2011 draft class, shows that Shanahan and friends might actually know what they’re doing when it comes to building a franchise from the ground up.

5. Helu’s Hurdle – When rookie running back Roy Helu leapfrogged over a Seattle defender en route to a 28-yard touchdown, it represented a signature moment for a player with a very bright future.

Add in back-to-back 100-yard performances by fellow rookie Evan Royster, and it’s tough not to get excited about the team’s sudden depth at running back.

4. Fred and Trent’s Bogus Journey – When the 2011 season began, tight end Fred Davis and left tackle Trent Williams were viewed as two of the key components on a work-in-progress offense.

By the time the season ended, it was clear that while both of these youngsters are extremely talented, they’re both very immature and need to do some serious growing up between now and the start of the 2012 season.

3. Kerrigan’s Grand Entrance – Admit it, if you were given the chance to name five players you thought the Redskins might use their 2011 first-round pick on, you still wouldn’t have guessed Purdue’s Ryan Kerrigan.

While he was considered one of the best pass rushers in the country, he didn’t have that level of name recognition that usual Redskins draft picks possess.
And you know what? That turned out to be the best thing the front office could have done. Their willingness to embrace a less glamorous mentality was rewarded Week 1 when intercepted an Eli Manning pass and returned it nine yards for a game-winning score against the rival New York Giants.

That touchdown perfectly illustrated why passing up on flashy draft picks isn’t a bad thing. here’s hoping the front office continues to embrace that mindset again this offseason.

2. Grossman Spreads the Wealth – Quarterback Rex Grossman is an extremely charitable person. That’s the only possible explanation for turning the ball over 25 times in just 13 games.

Sexy Rexy displays all of the gun slinger traits of Brett Favre (without, of course, the wins, records, accolades, positive statistics and Super Bowl wins), which can be exhilarating and infuriating at the same time.

Having a player at football’s most important position who can singlehandedly win a game for either team is the quickest way to a heart condition, because when you live by the Rex Cannon, you will eventually die with the Rex Cannon.

After an up-and-down first month, Grossman’s four interception outing against Philadelphia in Week 6 was the breaking point for Shanahan. Which paved the way for …

1. Beck Bombs Against Buffalo – Consider this the moment the season was lost or at the very least, the moment expectations had to be drastically reduced.

Because the moment backup quarterback John Beck laid an egg in a humiliating 23-0 loss to a mediocre Buffalo Bills team, it signified that Washington’s contingency plan was no better Plan A.

Had Beck been able to provide any sort of spark during his three-game trial, the Redskins still might have been able to salvage a respectable season. Once he flamed out though, it was clear that regardless of who took the snaps; this team was destined for yet another forgettable season.