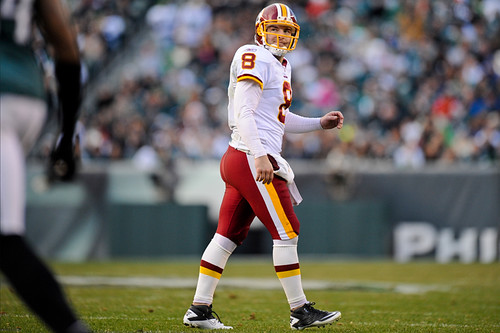 This game, and the 2011 season in general, can be summed up by one sequence of plays that ended the first half.

The Washington Redskins had the ball on the 4-yard line with 26 seconds remaining in the first half when quarterback Rex Grossman dropped back and threw a pass in the corner of the endzone to receiver Santana Moss.

As Moss made a play on the ball, a Philadelphia Eagles defender essentially mugged him, but no penalty was called. Clearly frustrated, Moss made a costly mistake by taking off his helmet while voicing his opinion of the non-call.

That earned him a 15-yard penalty for unsportsmanlike conduct for taking his helmet off on the field of play and pushed Washington back to the 19-yard line. Two plays later, Grossman connected with receiver Jabar Gaffney for an eight-yard gain. The only problem? He was tackled in the middle of the field on the 7-yard line and the Redskins had no timeouts remaining.

The call from the sidelines was to send the field goal unit out in hopes of picking up three points on a chip shot attempt before the clock expired. The only problem? When long snapper Nick Sundberg and friends ran onto the field, the offensive players were screaming out “Spike the ball!” and center Will Montgomery was lined up in the middle of the line with his hand of the football.

Because no one had any clue what anyone else involved was doing, the Redskins missed out on easy points and went into halftime trying to figure out what went wrong.

2. “Bad Habit” by The Offspring

Even when things went well for the Redskins, the team did its best to ruin the moment. Like, for example, when running back Roy Helu caught a pass underneath from Grossman and raced down the sideline for a 47-yard touchdown less than five minutes into the second half.

The touchdown was huge because it cut the Philadelphia lead to 10-7, but any momentum Washington would have gained from the eight-play, 80-yard drive was nullified by the unnecessary celebration by wide out Donte Stallworth. For reasons that remain unclear, Stallworth ran up to Helu in the endzone, dropped to a knee and began dusting off Helu’s shoes.*

*I was standing on the sidelines for both of these plays and they elicited two very different reactions. The non-call on Moss had the entire Redskins sideline fuming. Head coach Mike Shanahan stormed over to the nearest official and yelled “Are you watching the game?”

On the same play, punter Sav Rocca, who was standing next to me, yelled “Crikey!” which was amazingly awesome. But when Stallworth was whistled for his penalty, Shanahan was screaming into his headset “We know we can’t clean off his @#$%ing shoes!” while staring daggers into Stallworth a few feet away. Needless to say, he wasn’t pleased.

That resulted in a 15-yard penalty for unsportsmanlike conduct, which gave the Eagles better field position on their next drive. Philadelphia marched down the field on a 13-play, 72-yard drive that resulted in a field goal and never looked back — scoring touchdowns on three of their final four possessions in the 34-10 blowout.

And it all started to fall apart thanks to Moss, an 11-year pro, and Stallworth, who has nine years of NFL experience. That’s a combined 20 years between the two veterans, and yet, they both made mind-numbingly stupid decisions that cost their team.

3. “Dig Your Grave” by Modest Mouse

Without even factoring in the communication breakdown that resulted in a missed opportunity in the closing seconds of the first half, Washington’s special teams unit was at its worst again on Sunday.

Special teams coach Danny Smith’s unit continues to find new and creative ways to underwhelm. The Redskins were flagged on Philadelphia’s first two punts of the day, which ensured that the offense had to drive 80 yards to put any points on the board. In related news, both of those drives ended without Washington scoring any points.

On the other two Philadelphia punts, return specialist Brandon Banks finished with -1 yard.

And let’s not forget Rocca’s first punt of the day, which went just 22 yards. And finally, there was the fact that the Redskins had a field goal attempt blocked for the fifth time this season — which is the most in the entire NFL.

So yeah, I’m not sure how Smith remains employed if Shanahan actually wants to be competitive next season. Smith is a great guy, but his special teams unit has done nothing to suggest the guy deserves to be in town this time next year.

While it wasn’t exactly on the level of his four-interception outing the last time the Redskins faced the Eagles, Grossman did find time to throw one more pick to give him 25 turnovers in 13 games this season.

Grossman has actually turned the football over in each of the last 18 games he’s played in, which is not good.

The Redskins, as you might guess, don’t exactly have much of a margin for error these days. When Grossman gives the ball over once or twice a game, it makes it nearly impossible to overcome — which explains why the Redskins went just 5-11 this season.

Things aren’t going to get better until protecting the football becomes a priority in Washington. Grossman is capable of being a serviceable backup, but his days of starting (at least here in Washington) should be finished.

Let’s not end on a complete downer.

Helu and fellow rookie Evan Royster both finished the 2011 season on a high note — combining for 218 total yards against Philadelphia — and seem perfectly capable of carrying the proverbial load for the Redskins for the foreseeable future.

At a minimum, the Redskins need to upgrade at quarterback, offensive line and the secondary before the 2012 season begins, but Helu and Royster are doing their part to stabilize a position that has seen everyone from Clinton Portis to Larry Johnson to Willie Parker fail to be productive in recent years.