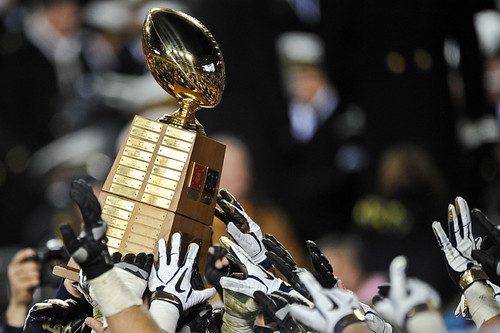 Please forgive me for the lack of posts on the website this week. I’ve been a little under the weather,* so everything else has had to be put on hold.

*On a side note though, if you’re interested in losing five pounds in 24 hours, I’d highly recommend food poisoning. It’s really, really effective.

In the interim though, I thought I’d share a link to my photos from the 2011 Army-Navy game. I know most of you have no real affiliation with the U.S. Army or Navy, but trust me when I tell you it’s one of the coolest events I’ve ever had the privilege to cover.

There are also videos shown throughout the game where the Army takes playful jabs at the Navy and vice versa, which is a thousand times better than watching corporate sponsorships videos.

Finally, there’s the fact that as soon as these young athletes graduate from college, they become brothers in arms. They don’t leave college early to go to the pros. They don’t get arrested for attempting to buy large quantities of narcotics so they can make a few extra bucks during the bye week. They become service members who will likely be deployed to somewhere halfway around the world before the next Army-Navy game rolls around.

And for that, I respect the hell out of them. So for those interested, here’s a link to my favorite photos I was able to capture at the 2011 Army-Navy game.