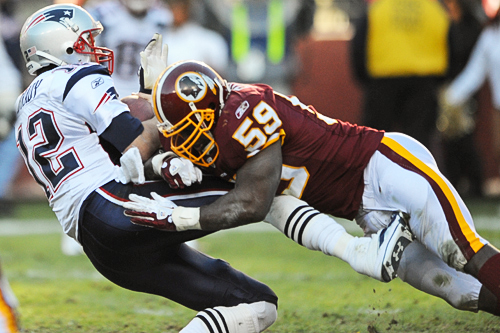 Generally speaking, I am not a fan of bitching and moaning about officiating.

It’s a fruitless exercise and seemingly every coach, player and fan who has ever been anywhere near a professional sporting event swears half a dozen times a game that the referees are out to get them.

That being said, I can say without a doubt that both the Washington Redskins and New England Patriots have legitimate reasons to voice their frustrations with the performance of Jeff Triplette and the rest of the officials Sunday.

While there were several calls during the course of the game that had me scratching my head, the worst was easily the unnecessary roughness penalty on Redskins linebacker London Fletcher during the second quarter.

For those who missed it, Patriots quarterback Tom Brady tucked the ball and scrambled for a three-yard gain. With Fletcher closing in, Brady attempted to slide just before the Pro Bowl linebacker was able to make contact.

The two players collided and, as you can see in my photo above, it looked like the end to a seemingly innocent play.

Unfortunately for the home team, the NFL goes overboard in protecting quarterbacks in general, and because the play involved a poster boy like Brady, a flag was thrown and Fletcher was whistled for a 15-yard penalty.

During the explanation of the penalty, Triplette said Fletcher allegedly hit Brady in the helmet, but the photo at the top of this post makes it pretty clear that simply wasn’t the case.

Needless to say, the call wasn’t very popular with Fletcher, who went ballistic. What came next was one of the most heated exchanges I’ve ever seen Fletcher participate in as he pointedly voiced his frustrations with the officials.

Even after the initial explosion of emotion, Fletcher still attempted to passionately plead his case to the referees. Of course, his words fell on deaf ears and the Patriots were 15 yards closer to putting more points on the board.

“You try to explain your situation, but they don’t really listen to you that much,” said Fletcher.

After the game, head coach Mike Shanahan left little room for interpretation with his thoughts on the penalty.

Talking with some of the guys in the locker room after the game, it was clear that understand why calls like that are made, but that doesn’t mean they have to like it.

“They want to protect the quarterbacks around the league, but obviously we didn’t like the call,” said linebacker Brian Orakpo. “I don’t want to comment on it too much because I’d get in trouble, so I’m just gonna go with it. I really believe it wasn’t a good call though.”

At that point, I wanted Orakpo’s perspective on just how tough it is to let off the gas when you’re running at full speed to try and make a play.

“It’s very tough because when he’s sliding like that, he’s not all the way down,” he said. “They’re both coming together at full speed and Brady is standing straight up. London is coming and then, all of the sudden he goes down while London is in the act of tackling the guy. I mean, how can you stop your momentum? That’s what we don’t really understand – the fine line between a legal hit and unnecessary roughness, especially on a play like that.”

This play stood out in contrast to the one a week earlier when Redskins cornerback Kevin Barnes was whistled for helmet-to-helmet contact on New York Jets quarterback Mark Sanchez.

Sanchez saw Barnes coming and ducked down as he braced for impact, which led to Barnes hitting him in the helmet. But Fletcher did everything in his power to make a play without breaking the rules and was still on the receiving end of a 15-yard penalty.

“London led with his shoulder and everything, and you’re still getting a call like that,” Orakpo said. “That really hurts a team – especially when momentum is going and all of the sudden they get a play like that when it could have been third down. That’s huge.”

Apparently the Redskins weren’t the only ones who were surprised to see a flag thrown on Fletcher’s hit.

“After the play happened, I looked at Tom Brady and gave him a look.” said defensive lineman Stephen Bowen. “He looked at me like ‘Yeah, it was a bad call.’ He knew it wasn’t a good call. Even his offensive line knows the league pampers him because he’s the golden guy with the league and stuff. But you’ve got to let people play, man. I think it was a really bad call.”

And while I have no reason to doubt what Bowen said to me after the game, Brady took it one step further the following day during a radio appearance.

“I thought it was a really clean play by him,” Brady said. “I think we’re pretty fortunate we got the call.”

The hope is, during the course of a season those calls eventually even out. And while the call was obviously a bad one, even after the penalty the Redskins were still able to hold New England to a field goal attempt.

The Patriots settled for a 24-yard field goal to tie the game at halftime 20-20, and Washington was very much in it for the rest of the game. Had the defense done a better job of tackling tight end Rob Gronkowski, then this play might not have carried as much significance.

Of course, when a team is 4-9, it needs all the help it can get. And when a team has a three-time Super Bowl winning quarterback like Brady, they probably don’t need phantom calls to help keep drives alive.

But hey, that’s just me.