when it comes to swagger, in rex they trust 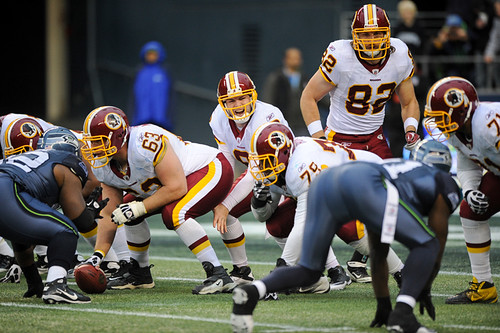 When an offensively-challenged offense like Washington’s is that careless with the football, there’s zero chance of victory.

But my biggest issue with Shanahan’s decision was that it lasted more than just the fourth quarter against Philadelphia. Turning to Beck to close out one game was fine, but sticking with a guy who has as many NFL victories as I do … well … hindsight or not, that was a stupid decision.

Beck entered our lives and continued to play exactly as Beck has always played – mediocre or worse.

The Redskins offense went from bad to worse under Beck (scoring just 31 points in three games), and the season was effectively lost during that pitiful stretch of football.

Had Shanahan stuck with The Rex Cannon the week after his four-interception performance, I feel completely confident in saying this season would have played out very differently.

I’m not saying Washington would have been on a six-game winning streak rather than dropping six in a row. I just believe that Grossman has shown an ability throughout his career to bounce back from awful outings.

Let me put it this way – the whole Good Rex/Bad Rex conundrum only works if/when Grossman follows up a stink bomb with an above average performance.

Well, talk to any Chicago Bears fan and they’ll tell you that during his time there, Grossman was capable of throwing three touchdowns or three interceptions any given Sunday. It’s why he’s lasted in the league this long (and why he’s also so maddening, at times, to those who cheer for his teams).

The absolute best time to have him behind center would have been the week after the Eagles loss, when Grossman could have used some of the “Rexual healing” against Carolina.

But don’t take my word for it. Listen to those who have known and worked with him for years.

“Even when he does struggle, he comes out there with confidence and he doesn’t look in the past,” said offensive coordinator Kyle Shanahan of Grossman. “He plays one play at a time and he’s a guy who you believe in for that reason. That’s why the guys follow him.”

And here’s what the elder Shanahan had to say this week about Sexy Rexy.

“Regardless, if you’re up or down, Rex is pretty consistent,” said Mike Shanahan. “He’s got a good attitude. He’s got a lot of belief in not only himself, but the supporting cast. He’s a leader out there.”

The ninth-year pro is generously listed as 6-foot-1 and 225 lbs., though I’d be surprised if he’s actually that tall. Anyone who has ever crossed paths with him off the field understands why tight end Fred Davis joked earlier this year that Grossman could probably stand to do some P90X – because the guy is anything but physically imposing.

And yet, he’s the player – more than anyone else on offense – that gives this team its identity. When he’s in a rhythm, everyone else feeds off of him.

“Out there on the field he’s calm and confident,” said receiver Anthony Armstrong. “He believes in the plays that are called and we have complete confidence that he’s going to make the throws. He’s not an elected captain on this team, but he’s still someone we look to lead us on offense.”

In the days leading up to the Miami game, Grossman split snaps with Beck during practice. Since then though, he’s regained the starting job and done everything possible to ensure Beck doesn’t go anywhere near the field again.

In his last two games, Grossman has completed 51 of 70 passes for 606 yards with four touchdowns and three interceptions. Any time a quarterback is completing nearly 73 percent of his passes and has a QB rating of 100.0, he’s doing something right.

Grossman was at his best this past Sunday when he sparked a comeback in Seattle even though the Redskins trailed by double digits in the fourth quarter of a game being played in one of the loudest venues the NFL has to offer.

“I thought he did a good job handling himself with 12 minutes left,” Mike Shanahan said. “He had a lot of composure and we knew we had to get a touchdown and obviously get the ball back, but you could see there was no panic. He went through his reads and handled himself well.”

When the Redskins absolutely needed Good Rex to make a cameo, he responded with a 50-yard bomb to Armstrong that fueled Washington’s win. With one shot from the Rex Cannon, the losing streak was snapped and the metaphorical weight had been lifted off of the offense’s shoulders.

Grossman suggested recently that he felt the offense had turned the corner and better days were ahead, and then rose to the occasion against the Seahawks. Now, Washington’s offense finally appears capable of challenging opposing defenses.

“We’ve got our swagger back,” Armstrong said. “That same swagger that you saw from the offense those first few games when we were 3-1 is what we’re putting back together now. It’s unfortunate that we weren’t able to carry it over in those middle games, but I’m pretty confident that it’s going to continue moving forward.”

And if it looks like Grossman is having a ball out there these days, it’s because he is. The guy is getting paid to do what he loves and truly feels this injury-riddled team can still complete with the cream of the crop.

“Yeah, I’m having a lot of fun right now,” he said. “It’s still a sport. I love the game of football. Anytime you make plays it’s fun. Celebrate with your teammates, step up in the pocket, linemen protecting you and you step up in the pocket and make a play, celebrate, win the game – it’s fun. There’s a lot of enjoyment. That’s why we started playing this game – to make plays.”

Rex, to his credit, isn’t dwelling on the benching. He’s too focused on the task ahead to worry about a bad throw or a bad game.

“Anytime you’re 4-7, you look back at some of the games that you could’ve or should’ve won, and a lot of things can change in the course of a season,” Grossman said. “You look back at those games that we could’ve or should’ve won and it gives us confidence moving on. You are what your record says you are, but we still feel like we’re a talented football team that can win every week.”

History shows there’s simply no telling which version of Grossman will arrive at FedEx Field this Sunday to face the New York Jets.

But even if he starts the game slow, there’s no doubt that Grossman’s teammates want him in that huddle and believe he’s the guy he can lead them to victory. And finally, it looks like his coaches have turned the corner of Sexy Rexy too.