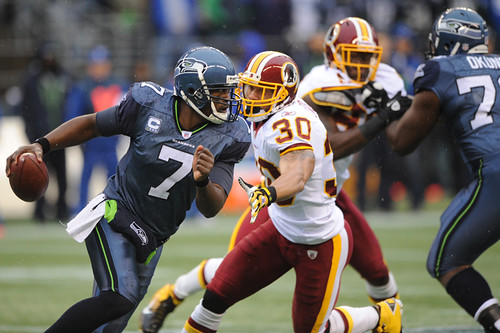 The last time I was in Seattle, it was to cover the only playoff game I’ve been on the sidelines for.

After the shocking death of safety Sean Taylor, the Washington Redskins rallied to win their final four games of the 2007 regular season to sneak in the postseason.

Emotions were high as Hall of Famer Joe Gibbs and the Redskins traveled west to face the Seattle Seahawks, and everyone involved felt there was a destiny of sorts attached to that particular team as they headed into the wildcard weekend.

Unfortunately, real life doesn’t always play out like a Disney movie and the Redskins ultimately lost to the Seahawks 35-14. The game ended up being the last of Joe Gibbs 2.0 and paved the way for the Jim Zorn Era, but what I remember most from that fateful trip was just how shitty Seattle fans were.

Maybe it’s because they live in a dark and dreary place that sees rain far too often, but by kickoff it was already clear that Seahawks fans are a perfect blend of insecure little men and loudmouth douchebags. The fact that the “12th Man” schtick originated in Seattle only further encourages their unruly behavior.

Well, I probably could have lived with all of the obnoxious taunts and foul language, if they’d have left it at that. But alas, the Seahawks fans were in rare form that day and they apparently needed to make sure their presence was felt.

So one of them dumped a beer on me for no apparent reason other than the fact that I was wearing a Washington Nationals hat on the sidelines when receiver Santana Moss caught a touchdown pass from backup quarterback Todd “The Tasty Drink” Collins to give Washington the lead, 14-13.*

I wasn’t jumping up and down and acting like a fool. I wasn’t wearing burgundy and gold. No, I was simply taking photos on the sidelines and one of them wasted a perfectly good beer down my back.

*This is the photo I was able to capture before spinning around hoping to identify which coward got me. If nothing else, it is a pretty amazing shot of a special moment.

If you’d have bet me money which city I would have had my first incident in, I’d have probably guessed Philadelphia or New York. But no, that distinction goes to the land of Starbucks and crappy computer-operating systems.

And for that, I will always despise all Seattle sports fans.

Judging by the fisticuffs that took place during the coin toss, I’d say that I wasn’t the only person at CenturyLink Field who wasn’t a big fan of Seattle. But we’ll get to that in a minute.

Each and every Sunday, the Redskins players meet up at the 50-yard line briefly once they’ve finished their pregame warmups. It only lasts a few seconds, but it’s definitely something they’ve been doing for years — at all games home and away.

Well, because all people in Seattle are clearly insecure, several Seahawks players took this gesture as a slight against them and their captains tried to get in the faces of DeAngelo Hall, London Fletcher and Trent Williams during the coin toss because, as Hall put it, they were mad that “we stomped on their Seahawk.”

Not only is that a ridiculous sentence to begin with, but it’s also the stupidest thing Seattle could have done. Their unneccessary pushing and shoving motivated the Redskins in a way I haven’t seen this season.

For the first time during the 2011 season, the Redskins offense was able to take the ball and drive down the field for a touchdown on their opening possession. Again, the Seahawks players get all confrontational with the Redskins, who respond by putting together their best opening drive all year long. Coincidence? I think not.

Had they simply come out and said nothing, then the offense likely would have found a way to stall like every other time this season. Instead, they insured a fragile and underperforming team remained highly motivated throughout the contest and ultimately lost to Washington, 23-17.

3. “When the Sun Rose Again” by Alice in Chains

Last week, quarterback Rex Grossman said in his postgame press conference that he felt like the Redskins offense had finally turned the corner. Although they lost to Dallas, he had seen enough in the defeat to feel confident that Washington’s offense was back on track.

Well, with more than 400 yards of total offense against Seattle, I’m thinking he might be right.

The Redskins kicked the game off in fine fashion with a 14-play, 80-yard drive that ended with a two-yard touchdown pass from Grossman to tight end Fred Davis and every player on the visitor’s sideline erupted.

Offensive players felt the weight of the world off their shoulders. Defensive players were thrilled to take the field with a lead for the first time since Bill Clinton was in office.* Special teams players conspired ways to keep the Seahawks in the game no matter what.

*Factually, this is not correct. It just feels like it’s been that long.

For the game, Grossman completed 26 of 35 passes for 314 yards with two touchdowns, two interceptions and a 96.6 QB rating. And while I’ll gladly take Good Rex completing 74 percent of his passes each and every Sunday, the player of the game for Washington was easily running back Roy Helu.

It appears that the coaching staff finally got the memo that Ryan Torain’s two yard per carry average wasn’t cutting it, so they opted to see how Helu would fare with more than 10 rushes in a game.

Helu carried the ball 23 times for 108 yards. He had seven catches for 54 yards. But the play that showed Helu can be “the man” in the Washington backfield was his 28-yard touchdown run that featured the Redskins rookie hurdling a defender.

That’s a big-time play — much like what Helu did throughout his time with the Nebraska Cornhuskers in college. When Grossman has a dependable running back to help share the load, he’s a much safer option.

Hopefully head coach Mike Shanahan and friends saw enough from Helu to ensure it’s his job for at least the rest of the season.

Don’t be surprised if some new faces are involved with the Washington special teams unit next Sunday. Getting a short field goal attempt and an extra point blocked in the same game does nothing to inspire confidence — especially when Shanahan all but admitted kicker Graham Gano was essentially “kicking for his job” this week.

I like Gano and I don’t put all of the miscues on him. But he was the guy who sliced a kickoff out of bounds during the key moments of this game — giving Seattle the ball at the 40-yard line with more than six minutes left after the Redskins had just taken a 20-17 lead.

He’s also missed more attempts than any kicker in football over the last two seasons. So don’t be surprised if he’s updating his resume in the next day or two.