are the redskins better with mike shanahan? 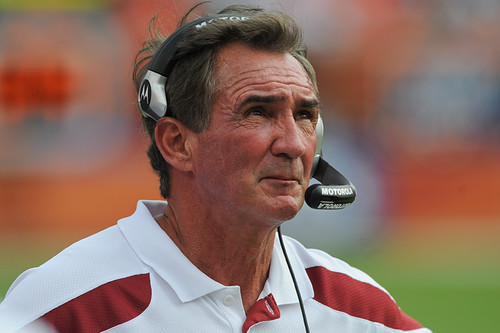 When he walked away from football back in 1992, the three-time Super Bowl winning coach inadvertently started a two-decade long downward spiral for the burgundy and gold.

A franchise that had made the playoffs eight of the last 11 seasons qualified for the postseason just three out of the next 18* years after Grandpa Gibbs headed off into the sunset.

*While Washington still has six games left in the 2011 season, it’s safe to say the Redskins are going to miss the playoffs for the 16th time in 19 seasons. That sentence alone makes me wonder why anyone under the age of 21 willingly roots for this team.

Amazingly, two of those three post-Gibbs playoff trips were manufactured by … well … Gibbs. Basically, every other season since ’92 has been completely forgettable as the Redskins have slipped further and further into mediocrity.

When Gibbs 2.0 decided to once again embrace retirement, the keys to the franchise were turned over to an unknown (and, as it turns out, underqualified) gentleman named Jim Zorn.

Zorn was quirky. Zorn was amusing. But most of all, Zorn was a bad head coach.

In his two seasons in Washington, the former Seattle Seahawks quarterback took a playoff-caliber roster and essentially ran it into the ground – winning just 12 of 32 games with an overpaid and under-performing roster.

Mercifully, Zorn was let go after the 2009 season and owner Daniel Snyder brought in Mike Shanahan – a head coach with a proven track record and two Super Bowl victories of his own.

Unlike his predecessor, Shanahan did not inherit a playoff-ready roster. He took over the oldest team in football and, for better or for worse, opted to shy away from any talk of rebuilding.

Instead, Shanahan pulled the trigger on a deal that brought in Philadelphia Eagles quarterback Donovan McNabb and crossed his fingers that the aging veteran could adequately play the role of John Elway.

Two months into the 2010 season, Shanahan had seen enough to know the McNabb experiment wasn’t going to work. The 12-year pro was benched in favor of Rex Grossman, and a season that started with plenty of hope and promise ended with just six wins and more new questions than answers.

Since the McNabb incident in Detroit, the Redskins have gone just 5-13.

The quarterback position, led by Grossman and John Beck, has been inconsistent at best, and dreadful at worst. Statistically, the rushing attack – the one area of football Shanahan has always been able to excel at – has somehow been worse.

Basically, the Redskins only hope of winning on Sundays involves dinking and dunking an opponent to death. That might work in water boarding, but it’s not a way to win football games.

When Grossman threw a 16-yard touchdown pass to receiver Jabar Gaffney with 14 seconds left in the first half against Dallas this past Sunday, it gave Washington their first lead in a game since Oct. 2.

Any time you go five entire games without holding a lead for a single second, you’re doing it wrong. That’s not something ‘Skins fans ever expected to hear when Shanahan first came to town – which is why it’s fair to ask if this franchise is actually headed in the right direction.

A Shanahan-led team had never been shutout. It’s has now. No Shanahan-coached team had ever lost six games in a row. Well, he can cross that off the to-do list.

Week after week, the Redskins find new and creative ways to re-write the Shanahan record books – just not in the way he hoped when he took his talents to our nation’s capital.

At this point, the question becomes – how many of these current players can the Redskins build around?

When Shanahan used the fourth-overall pick on left tackle Trent Williams, he obviously envisioned the Oklahoma standout locking down the blind side for the foreseeable future.

While Williams has had his moments during his season and a half in D.C., he’s also a player who is seemingly always saddled with some sort of injury or ailment. Oh, and he’s also a guy who gets called for a holding penalty once a game and is quickly earning a reputation as a hot head who tries to get into a shoving match just as often.

Middle linebacker Perry Riley appears to be the only other noteworthy player the Redskins drafted in 2010 and he’s only been a starter for 10 minutes, so it’s far too early to know if he’s worth keeping around long term.

Outside linebacker Ryan Kerrigan has been the defense’s best player this season, and looks to be a perfect complement to linebacker Brian Orakpo. Defensive lineman Jarvis Jenkins was a standout during training camp, but his season ended before it ever started.

After being inactive for the first month or so of the season, rookie receiver Leonard Hankerson had a breakout game against Miami … and then promptly injured his hip and was lost for the year.*

*How much blame should be assigned to Shanahan for Hankerson’s injury? The guy was stuck riding the bench for the first two months of the season and the basically became a focal point overnight. Was it unrealistic to think his body could go from zero to 60 overnight? Did his coach set the rookie wideout up for failure by throwing him into the fire too fast?

Running back Roy Helu has been fun to watch and his 4.9 yards per carry average is more than a yard better than anyone else on the roster, but he’s never been given more than 10 carries a game, so it’s still too early to know how much of the running game could/should rest upon his shoulders.

Other rookies, such as receiver Niles Paul, safety DeJon Gomes, offensive lineman Maurice Hurt and defensive lineman Chris Neild have also looked good at various times, but it’ll take time to see if any of them should consider buying their homes versus renting.

Who else on the current roster can be counted on in, say, three to five years? Not guys like middle linebacker London Fletcher or receiver Santana Moss. Probably not tight end Chris Cooley either, though it saddens me to even type that.

Looking objectively at the current roster, I can (semi-) confidently see tight end Fred Davis, Williams, Orakpo, Kerrigan and maybe safety LaRon Landry being building blocks for the franchise – although, Landry’s long-term status is tough to predict as he struggles to remain healthy.

Shanahan has won just nine out of 26 games since taking over the Redskins. Steve Spurrier was 10-16 at this point. Zorn was 11-15.

Before the season began, I said I could live with another 6-10 season from the Redskins because Shanahan was getting “his players” and building depth with a much-needed youth movement.

Of course, that went out the window when youngsters like Jenkins and Hankerson were lost for the year due to injury. So unless Shanahan decides to increase Helu’s workload, ‘Skins fans are left focusing on Kerrigan as the lone bright spot in an otherwise forgettable season.

Hopefully the Redskins will do the smart thing and draft a franchise quarterback with their first-round pick in 2012.* Maybe they’ll spend the rest of the time, energy and resources into upgrading the offensive line and acquire weapons to give that quarterback a chance at success.

But as it stands now, this is as bad a stretch for the Redskins as any during the last two decades. I’m not in a hurry to rush Shanahan out the door, but that doesn’t mean I can’t be disappointed with just how badly his time in Washington has gone.

Zorn took over a veteran team that was good enough to make the playoffs, and ran it into the ground. So far, Shanahan hasn’t fared any better in his season and a half. Plenty of the names on the roster have changed, but, sadly, the results remain the same.