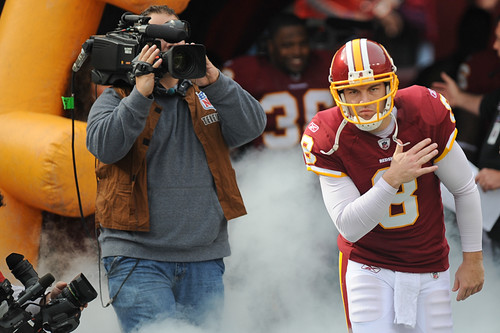 What does it say about the state of the Washington Redskins franchise that local fans can actually live with a loss to a hated rival?

No ‘Skins fan ever wants to see the burgundy and gold fall to the Dallas Cowboys, but seeing the team shows signs of life for the first time in more than a month should be enough to help ease the pain of the 27-24 overtime loss.

The game started much like every other Redskins game in 2011 – with the offense missing in action in the first quarter. Washington’s first three offensive plays were two end-arounds and a fumble.

Their first five drives resulted in four punts and a fumble as the Redskins racked up a grand-total of 26 yards, and it seemed as if it was only a matter of time before Dallas took control of the game and blew out the home team.

And then something crazy happened.

On 3rd-and-7, Quarterback Rex Grossman connected with receiver David Anderson for a 23-yard gain that seemed to spark the Redskins offense.

Three plays later, Grossman scored just the fourth rushing touchdown of his career and the Redskins had a first-half touchdown for the first time since the St. Louis game, Oct. 2.

As if that wasn’t reason enough to celebrate, the Redskins struck again with 14 seconds left in the first half – when Grossman connected with receiver Jabar Gaffney on a 3rd-and-6 play for a 16-yard touchdown that gave Washington a 14-13 lead at the break.

For starters, the Cowboys were coming off of a 44-7 win over the Buffalo Bills. Those same Bills shutout the Redskins 23-0, so basically, logic dictates that the Cowboys should have beaten Washington 67-7.

If that’s not enough, that seemingly innocent one-point lead represented Washington’s first lead in any game since that same St. Louis game 48 days ago.

It goes without saying that if a team never has the lead, they don’t win many football games.

2. “Get That Dirt Off Your Shoulder” by Jay-Z

Anyone familiar with Grossman’s body of work knows to expect the unexpected. Depending on the week, the nine-year veteran can either single-handedly win or lose a game.

Against Philadelphia earlier this season, Grossman was at his worst – throwing four interceptions and opening the door to the miserable John Beck era in Washington.

But then there are games like the season-opening victory over the New York Giants when Grossman proves to be the difference maker in a positive way.

That’s the way it goes with the Rex Cannon – you never whether you’re getting Good Rex or Bad Rex until the proverbial bullets start to fly.

After the first 15 minutes of play, it seemed like the Redskins were going to have to settle for another less-than-stellar outing from the quarterback position.

But then Sexy Rexy stepped up and treated the FedEx Field faithful to the most exciting game of the year. Grossman orchestrated back-to-back scoring drives late in the second quarter and, if nothing else, showed his teammates that he is capable of moving the chains and keeping drives alive with his arm.

Grossman completed 25 of 38 passes for 289 yards with three touchdowns (two passing, one rushing) and one interception. His quarterback rating of 95.2 is the second-best showing he’s had this season – behind only his 110.5 rating in the season opener.

And best of all, Grossman played with an attitude that screamed “I’m tired of all these critics talking shit about me.”

His swagger was noticeable from the moment he took the field (see photo above) until the moment the game ended and his teammates like tight end Fred Davis admitted that they feed off Grossman’s energy during the games.

It’s too bad that Grossman doesn’t have these outings more often, because I found myself absolutely enjoying the show as Good Rex took command of the game.

With Santana Moss sidelined and rookie Leonard Hankerson lost for the year due to injuries, it’s widely believed that the Redskins passing game now consists of Davis and … well … just Davis.

Well, Gaffney picked a fine time to step up his game – posting a game-high seven catches for 115 yards and a touchdown against Dallas. And it wasn’t just the numbers (although they were great).

It was also where and when Gaffney made those catches that counted most. His 16-yard touchdown with 14 seconds left in the half was huge and came with enough of a degree of difficulty that I thought for sure he was going to drop it when the pass came in a little high.

But Gaffney held onto the ball and gave the Redskins a legitimate chance to send the Cowboys back to Dallas as losers.

Gaffney wasn’t the only receiver to make a big impact against Dallas though. Donte Stallworth, who was unemployed one week ago and only rejoined the Redskins after the Hankerson injury last week in Miami, also rose to the occasion Sunday.

Stallworth, who had just two total receptions the last two years, finished the game with four catches for 51 yards and a touchdown that tied the game with 14 seconds left in regulation.

Gaffney and Stallworth might not be big-name wideouts, but if they can continue to produce in key moments for Washington, there’s a chance both of them could be around for a while.

Much like Washington’s offense, Redskins returner Brandon Banks has been missing in action for weeks.

In fact, the only time a player who was once considered a fan favorite has done anything noteworthy over the last month was when he nearly coughed up the football because he failed to catch a kickoff.

While Banks fancies himself as a duel threat receiver/returner, ‘Skins fans simply wanted him to provide any kind of spark on special teams rather than day dreaming about contributing on offense.

Against Dallas, Banks was back in top form – tilting the field in Washington’s favor all game long. With punt returns of 55 and 32 yards and a kickoff return of 27 yards, the speedy second-year pro did everything possible (short of scoring a touchdown) to help his team out.

Banks finished the game with a total of 190 return yards and reminded his coaches, teammates and fan base just how electric he can be when he’s got room to make a play.

5. “When The Music Stops” by Eminem

While there was a lot to like as the offense had its most productive day of the season and the return game was clicking on all cylinders, the fact is the Redskins still lost.

The offense still started slow and turned the ball over. The special teams unit could be pleased with the performances of Banks and punter Sav Rocca (his 63-yarder was a thing of beauty), but kicker Graham Gano had a chance to win the game in overtime and his attempt sailed wide right.

And the defense, playing with a lead for the first time in decades, failed to close out an opponent on the ropes. The Cowboys clawed their way back into the game thanks to big plays – especially on third downs.

A 59-yard touchdown by tight end Jason Witten on third down was huge and an overtime completion from quarterback Tony Romo to receiver Dez Bryant set up the game-winning field goal for Dallas.

If the Redskins defense is ever going to be considered dominant, they’re going to have to get back to being on the NFL’s best third down units.

Here’s a link to my favorite photos I was able to capture during the game and a bonus animated .gif of Gaffney’s highly-amusing John Cena impression.