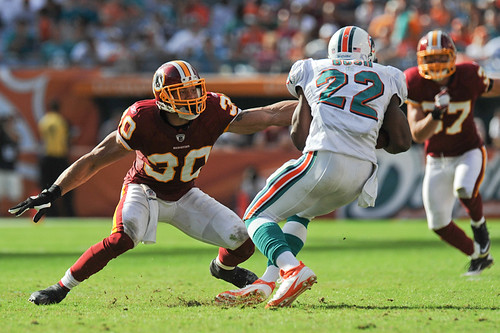 Make no mistake about it – covering the Washington Redskins as a credentialed media member for the last seven seasons has been a dream come true.

Each and every Sunday, I’m on the sidelines with the best possible view as my favorite football team takes to the field and I know there isn’t a diehard sports fan out there who wouldn’t trade places with me in a heartbeat.

That being said, the job isn’t without its challenges. For starters, a typical game day usually lasts 10 or 11 hours, which is time spent away from your loved ones.

There’s also the whole “try not to get run over” aspect of being on the sidelines, which can be both exciting and terrifying at the same time.

Redskins rookie linebacker Ryan Kerrigan nearly trampled me earlier this season when he picked off an Eli Manning pass and returned it for a touchdown in Week 1, and there wasn’t much I could do other than duck and cover while trying to protect my expensive camera equipment.

But the most challenging part of covering the Redskins is heading into the locker room after a tough loss and trying to make sense of it all. No one likes losing, so you can imagine how thrilled the players are to have a sea of microphones, digital recorders and TV cameras shoved in their face just moments after suffering through a heartbreaking loss.

That’s why I’m shocked outbursts like the obscenity-laced tirade cornerback DeAngelo Hall had after the Dallas loss don’t happen more often. There’s only so many times you can handle the same stupid question over and over before you lose your cool and start telling people how you truly feel. And if those feelings involve a few “F bombs,” then so be it.

And let’s be real – how many different ways can a journalist tactfully ask, “So … what the hell happened today?” as a season continues to spiral out of control?

Like I said, everyone hates losing. Therefore, this gig is a lot less enjoyable when the offense has scored exactly one touchdown in their last 36 possessions and the defense fails to make a play when the game is on the line.

Rather than trying and put into words after the Redskins suffered a fifth-straight loss – this time to a one-win Miami Dolphins team that has been dreadful for most of the season – I thought it would be interesting to let fans hear from the players directly.

Instead of trying to put some spin on things or make sense of it all, I’d rather just share their words from the post-game locker room and let fans draw their own conclusions about what, if anything, the 2011 season has left to offer.

“There were points in the game where we feel like we could have taken control of the game, but we didn’t do it,” said defensive lineman Barry Cofield.

“It’s frustrating,” said fullback Darrel Young. “The same things continue to happen week in and week out. It’s not the coaching staff – it’s the players. We put ourselves in these situations when we get penalties or we miss a block or we don’t catch a pass in a critical situation. We’re killing ourselves.”

“It’s the same thing once again, man,” said tight end Fred Davis. “I don’t know why we keep getting ourselves in those situations with the decisions that we’re making and everybody not making a play at the time when we need them to make a play. If it’s not a receiver, then it’s someone not blocking or someone missing an assignment on a blitz and giving up a sack. We just need to focus on each play, one at a time. We can’t think or think we’re better than any team because we’re obviously not right now.”

“We’ve got to find a way to put some more points on the board – that’s what it comes down to,” said linebacker Lorenzo Alexander. “Whether that’s special teams getting a touchdown or the defense taking it to the house or the offense scoring some touchdowns … we’ve got to find some touchdowns from somewhere. That’s really what’s hurting us right now.

“The coaches can only do so much,” Alexander continued. “It comes down to players needing to win one-on-one matchups and making plays. Obviously other teams are doing it. Their coaches are no smarter than our coaches, so it’s on the players to step up and make a difference. It needs to happen a lot sooner than later.”

“It’s like every team that we play, it’s like they already know they got a ‘W’ against us,” said linebacker Brian Orakpo. “It’s just ridiculous, man. It’s time to turn this shit around.”

“I wish I had an answer for you,” Orakpo said when asked what it’s going to take to turn things around during the team’s longest losing streak in a decade. “It’s frustrating. I don’t have an answer. We just have to dig deep, man. Its cliché, but I’m running out of material. I don’t know what else to say. It’s just; I’ve never been a part of something like this.

“Week in and week out, it’s the same story,” said safety LaRon Landry. “I can’t give you no other answer.”

But, for my money, the most interesting quote came from one of the newest members of the Redskins.

“I’ve been on some teams that have been really bad and this isn’t a bad football team,” said recently-acquired receiver David Anderson. “This is just a case of one error here or there and guys needing to learn how to finish football games.”

As you can see, every player I talked to reiterated that the problem isn’t head coach Mike Shanahan or his assistant coaches. All of them said the team’s biggest issue is mental mistakes or failure to execute by the players.

And there isn’t any finger pointing or in-fighting – even when the defensive players seemingly have every right in the world to voice frustrations at an offense that has scored just 20 points in the last three games.

They all remain convinced that the talent is there, they just need to do a better job of making plays when the game is on the line.

It would be a much more enjoyable experience if I got to cover the Redskins during a time when they actually made the playoffs more than once every few years, but it’s still nice to see these players believing in their coach and having each other’s back.

I’d say more on the subject, but much like Orakpo, I’m simply running out of material as the loses keep piling up.