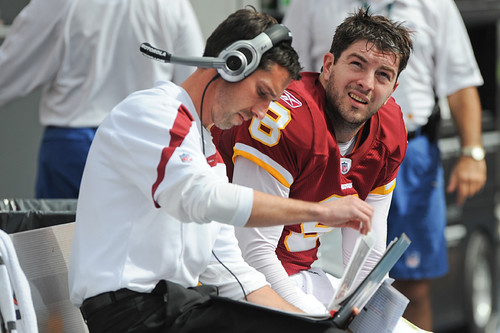 1. “Different Names For The Same Thing” by Death Cab For Cutie

Mike Shanahan and the Washington Redskins set out to silence their critics against the Miami Dolphins Sunday.

While some fans inexplicably believe the Redskins’ head coach is content to lose the rest of the games on the schedule in hopes of securing the best draft pick possible, Shanahan made a series of pre-game moves that seemingly killed that theory.

After three uninspired starts, quarterback John Beck was relieved of his duties in favor of unstable veteran Rex Grossman. Beck might not turn the ball over as much as Grossman, but he also took too long to make decisions with the football and rarely attempted to challenge defenses.

Middle linebacker Rocky McIntosh was also removed from the starting lineup — giving way for Perry Riley’s first NFL start. Running back Roy Helu, who made his first career start one week ago, was bumped in favor of Ryan Torain and while receiver Anthony Armstrong wasn’t a starter to begin with, it appeared most of his playing time was given to David Anderson, who has been on the team less than a week.

None of those moves suggest a coach who is waiving the white flag. They all suggest Shanahan was doing anything and everything within his power to right the ship and salvage a season on the brink of total collapse.

Unfortunately for the two-time Super Bowl winner, those moves had little to no impact and the Redskins lost for the fifth-consecutive game — as Miami won their first home game in 364 days, with a 20-9 victory over Washington.

Even though the Dolphins were just 1-12 in their last 13 home games and play in front of one of the most indifferent crowds I’ve ever witnessed in person, Miami was able to secure the win because the Redskins offense still fails to mount any sort of consistent attack and the defense still gets gashed for chunks of yards at the worst-possible time and struggles to get off the field when the game is on the line.

Now, Shanahan must deal with the first five-game losing streak of his illustrious coaching career as the Redskins dropped five in a row for the first time since Marty Schottenheimer’s 2001 campaign.

And while Schottenheimer was able to bounce back from an 0-5 start to finish the season 8-3, there’s little reason to think these Redskins are remotely capable of anything similar. That’s because it’s tough to envision this dire situation suddenly improving — not when Washington lost to a one-win team for the fourth time in nine games this season.

I’ve always believed in the saying “moral victories are for losers,” but there were a few players who did have respectable outings against the Dolphins.

For starters, there was rookie receiver Leonard Hankerson. You might remember him as the guy who couldn’t make even the simplest of catches during the preseason or as the youngster who was inactive for Washington’s first five games of the season. Well, on Sunday he went from liability to clutch, as Hankerson became the team’s only reliable weapon on offense against Miami.

In just his second NFL start, Hankerson hauled in eight catches for 106 yards — making him the first Redskins rookie wideout to finish a game with at least 100 receiving yards since Rod “Stone Hands” Gardner back in 2001 (162 regular season games ago). To put those numbers in perspective, players not named Hankerson finished the game with 13 catches for 109 receiving yards.

“It just felt good to go out there and contribute to the team,” Hankerson said. “I’m out there capable of making plays and catching first downs and stuff like that.”

Of course, because this season is destined to be a disaster, Hankerson left the game early with a hip injury and was seen leaving the stadium on crutches. So naturally, before fans can even enjoy his breakout performance, they’re now left wondering when is the next time Hankerson will be able to take the field.

Another rookie who continues to be a lone bright spot this season is linebacker Ryan Kerrigan, who finished the game with two sacks, two forced fumbles and six tackles. While fellow linebacker Brian Orakpo has struggled during the second half of the each of his two previous NFL seasons, Kerrigan showed no signs of slowing down what has been an outstanding first season.

Kerrigan leads Washington with four forced fumbles, is second on the team with five sacks and remains the only defensive player to score a touchdown this season. As grim as this season has been, I can’t even imagine how sad things would be without Kerrigan in the lineup.

The only other player who bothered to show up in Miami was Riley — the seldom-used linebacker who was making his first NFL start. The second-year pro finished the game with nine tackles (seven solo) and made more of an impact than McIntosh has in years.

Unfortunately, it’s tough to celebrate something even as significant as your first pro start when your team is playing the worst stretch of football in a decade, so Riley wasn’t in the most festive of moods in the post-game locker room.

Just how bad was this game? So bad that Dolphins running back Reggie Bush, who is known more for taking money in college and sleeping with the Kardashians than actually playing football, rushed for two touchdowns against Washington.

Bush hadn’t rushed for two touchdowns in a game since 2007, so once again, the opposition can send a thank-you card to Redskins Park as another opponent was able to get well at Washington’s expense.

Conversely, Torain continues to be one of the least effective running backs in football.

I can understand why Shanahan made the moves concerning Grossman and Riley, but what exactly does the coach see in Torain at this point?

Regardless of whether Beck or Grossman is the starting quarterback, the Redskins continue to boast one of the worst offensive imaginable. Washington has just one touchdown in their last 36 drives and has scored a grand total of 20 points over the last three games.

During the current five-game losing streak, the team has scored just 53 points (while allowing 115) and seemingly follows the same script each and every week.

The Redskins get off to a slow start, punt the ball a bunch and then pray the defense pitches a shutout and the kicking game doesn’t get an attempt blocked. Washington hasn’t scored a first half touchdown since the St. Louis game (which also happens to be their last win) and has racked up a depressing 16 points in nine first quarters this season (one touchdown and three field goals).

Other than that though, things have been great for the Redskins.