please get off of chris hanburger’s lawn 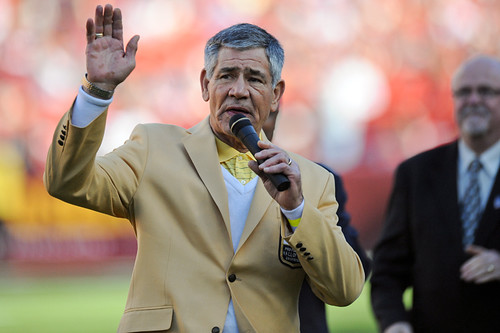 Whether imagining what it’s like to win an Academy Award or a local bowling tournament, we all dream of glory. And when no one is looking, many of us even spend time in front of a mirror practicing our Hall of Fame induction speech or our acceptance speech after taking home a Grammy.

Well, maybe not everyone.

Take, for example, former Redskins linebacker Chris Hanburger, who was finally enshrined in the Pro Football Hall of Fame after 27 years of eligibility.

While a moment like that is something most sport fans can only dream of, it turns out that receiving football’s highest honor was actually a bit of a nuisance for Hanburger.

When I had the chance to chat with the legendary Hanburger before the Washington Redskins hosted the San Francisco 49ers this past Sunday, the nine-time Pro Bowler caught me off guard when I simply asked how it felt after a nearly three-decade wait was over.

“I kind of jokingly told them at the Hall of Fame — ‘Look, why can’t you just mail this thing to me?’”

If it sounds like Hanburger is unappreciative, that’s not the case at all. He was incredibly flattered by the nomination, even if he wasn’t thrilled with the notion of having everyone’s eyes upon him as he accepted the award.

“It’s a tremendous honor, at least for me it was,” Hanburger said. “It’s not anything that I ever expected, so it’s very exciting.”

It’s just that Hanburger isn’t one for pomp and circumstance. While today’s NFL may have plenty of showboating and camera hogging, Hanburger would prefer to avoid the spotlight completely.

The 70-year-old Hanburger is more likely to tell kids to get off his lawn than to hold a T.O.-style press conference on it. The misanthropic former linebacker simply has no desire to be the center of attention.

“I’m not into that,” he said. “I found out that I was elected into the Hall of Fame the night before the Super Bowl, like everybody else did.”

So what went through the mind of the former Redskins great when he discovered that he’d be memorialized in football’s sacred hall? Did he reflect on past accolades – the four first-team All-Pro selections, the six All-NFC awards, the nine Pro Bowl bids?

Or was it specific moments in his historic career that stood out in his mind as he heard the news – the 26-3 trouncing of the Dallas Cowboys in the 1972 NFC Championship game or perhaps that magical feeling of making it to the Super Bowl for the first time in franchise history later that same year?

Nope. His first thought was what a hassle the whole ordeal was going to be.

“I thought, ‘Oh my god, now I’ve got to pack a bag and go fly to Dallas to be there for the coin toss.’ That kind of thing – that’s not my cup of tea,” Hanburger said.

“I’m pretty much a loner, for the most part,” he confessed. “I don’t like crowds. I don’t go to games or anything.”

Hanburger isn’t too big on watching football these days either. He said he follows along on the latest developments with the Redskins by reading about them in the newspaper, but he simply doesn’t have the patience to keep up with their games on television.

“I don’t watch football games,” Hanburger said. “I may watch a quarter. Maybe watch a little bit more of a college game. But no, I just don’t enjoy sitting there and watching the TV that long.”

With that in mind, it should come as no surprise that it’s been a while since Hanburger last visited FedEx Field.

“The last time I went to a game was when I got elected to that 70 Greatest Redskins thing,” he said. “And I hate to say it, but I left about halfway through the third quarter. And the Super Bowl, I have to admit, right after the third quarter started, I headed back to the hotel.”

It’s a safe bet that Hanburger once again snuck out early this past Sunday, not that you could blame him for not sticking around to the bitter end of the ‘Skins 19-11 loss to the 49ers.

Still, while Hanburger may be a bit of a loner, he did enjoy coming out to the game and getting to reconnect with his former teammates. Living in South Carolina, he said he doesn’t run into the old gang much anymore.

“Last night at the reception, we didn’t wear name tags,” Hanburger said. “I’d be talking to Brig Owens for example and I’d say, ‘Hey Brig, who is that over there? They look familiar, but I can’t remember their name.’ I don’t know whether it’s because they’ve changed so much or whether I just can’t remember things very well anymore.”

Either way, it’s a safe bet that Hanburger will be remembered for years to come as one of the Redskins all-time greats. He’d just prefer that you remember him quietly and privately, somewhere far, far away from his lawn.