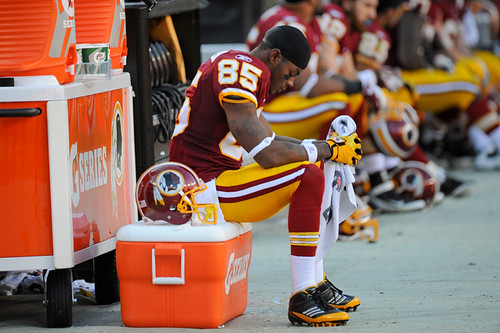 1. “I’ll Follow You into the Dark” by Death Cab For Cutie*

John Beck has been so bad since taking over the starting quarterback role for the Washington Redskins, that he’s rewriting history.

One week after a Mike Shanahan-coached team was shut out for the first time in his 18-year career, Beck’s inability to mount any sort of offense helped two teammates set franchise records.

Thanks to Beck, kicker Graham Gano now owns the record for longest field goal in Redskins history – after connecting on a 59-yarder right before half that represented the first points Washington had scored in six quarters of action.

And because his quarterback was unable to complete anything other than check downs, running back Roy Helu set a franchise record with 14 receptions during the game – surpassing the great Art Monk in the process.

While it’s nice to end up in the history books, it’s safe to say that neither record happens if Beck is halfway decent at his job.

Sure, Beck is a likable guy who is easy to cheer for, but when it comes to leading an offense and putting points on the board, he’s yet to show he deserves an NFL paycheck.

After falling to the San Francisco 49ers 19-11, the Redskins are now a disappointing 3-5 on the year – with Beck still searching for his first NFL victory.

Of course, wins are hard to come by when the offense scores a grand total of 31 points in the three games since Beck was named the starter.

And yet, for reasons that remain unclear, Beck continues to have the support of his head coach.

“I thought he did some good things,” Shanahan said, although, to be fair, he wasn’t strapped in to a lie detector, so there’s no way of knowing if even he believes that nonsense.

But let’s pretend Shanahan sincerely believes that Beck “did some good things.”

What exactly did Beck do on Sunday that could possibly qualify as a positive? Make it to the stadium on his own? Get dressed in his uniform without any assistance? Remember which sideline to come to after going three-and-out once again?

Honestly, I’d love to hear from Shanahan (or anyone else for that matter) what exactly Beck excelled at against San Francisco. Because, from where I was standing, he continues to struggle in every phase of the game.

Beck can’t complete a deep pass to save his life. Defenses don’t even need to worry about the Redskins attempting passes more than 15 yards down field, so they’re free to stack the line and send pressure as often as they’d like.

Even though his mobility has been praised by the coaching staff, Beck doesn’t seem to have a feel for when pressure is coming and he struggles when his initial target is covered. So basically, all a defense has to do is jam the receivers at the line to disrupt the timing of their route and send an aggressive blitz at Beck.

He’s either going to turn the football over, throw an uncatchable pass or dump the ball off to his running back for a modest gain. Unless a defense is going to allow the Redskins to march down the field on a 10-minute, 27-play drive, there’s never any real threat of Washington’s offense doing any damage.

That’s what happens when you can’t stretch the field, and for all the talk of the team’s lack of playmakers, the fact is Beck couldn’t get the ball to Jerry Rice if he was more than 15 yards away.

For all the venom that was directed at Rex Grossman during his brief time in the starting role, he was at least able to put points on the scoreboard.

Go ask any Chicago Bears fan about their time with the Rex Cannon and they’ll inevitably say the following – you never know which Rex is going to show up.

One week he’ll throw three interceptions and cost his team the game, but he’ll come right back the following week and throw for three touchdowns. That’s what you get with Grossman.

But for as erratic as Sexy Rexy can be, at least the offense looked competent with him running the show. The Redskins have scored 11 points in their last two games, as Beck continues to put the offense in the term “offensively challenged.”

We now live in a world where the local hockey team outscores the football team, which is great for Alex Ovechkin and the Washington Capitals. Not so much for Beck and friends.

And while players continue to toe the company line, spouting clichés like “we just need to do a better job of executing,” the fact is that some of the guys on the offensive side of the ball are growing increasingly frustrated with their lack of involvement.

Both Jabar Gaffney and Fred Davis, two players who saw plenty of passes come their way when Grossman was the starter, both hinted that too often they were open and their quarterback, for whatever reason, was unable to get them the football.

In related news, Beck completed 14 passes to Helu, compared to just 10 passes to actual receivers. Helu, who had never caught more than three passes in a game before this past weekend, had as many receptions as Davis, Gaffney, Leonard Hankerson and Terrence Austin combined.

No one threw anyone under the proverbial bus, but it’s safe to say that these last three games haven’t exactly been a dream come true for any of the other 10 starters taking the field with Beck.

It’s no coincidence that guys like Santana Moss, Darrel Young and Gaffney were vocal in stating their belief that Grossman should have remained the starter. It’s nothing personal against Beck, they just all felt that Rex gives this team the best chance to win.

After three subpar performances from Beck though, I can’t say I disagree. Watching this neutered offense struggle to stay on the field for more than three plays at a time is no fun for anyone involved.

*I’d include more than one song on this week’s playlist if this didn’t feel like a broken record. Unfortunately, week after week, it looks like this is what Redskins fans are in for as long as Beck is still taking snaps.