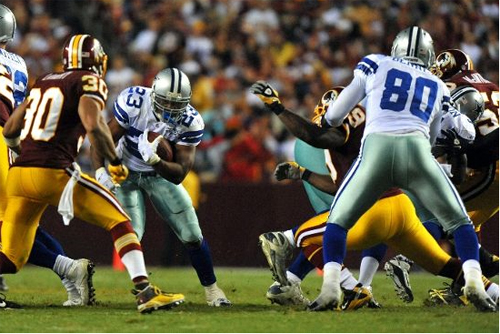 The Washington Redskins made an interesting move this week – claiming Dallas running back Tashard Choice off of waivers.

Choice was placed on waivers by the Cowboys to make room for rookie linebacker Bruce Carter and became expendable because of the emergence of DeMarco Murray.

The fourth-year pro has been saddled with nagging shoulder and hamstring injuries this season, which explains his limited production – 75 rushing yards in five games this season.

But the Redskins were willing to roll the dice on Choice in hopes that he’ll eventually be able to step in and fill the void left after Tim Hightower was lost for the year.

“Obviously, we needed some depth at the backfield position,” said head coach Mike Shanahan. “We’ve watched him through the years [and] we think he has a chance to come in and help us once he learns the offense and gets over his hamstring injury. So we’ll wait a week or two and see how he is.”

Washington was the only NFL team to put in a claim for the injured Choice, even though they’re nowhere near the only team in the league that could use a boost at running back.

Shanahan wasn’t concerned with why other teams shied away from the 26-year-old though. He made the move because he still thinks Choice can be a solid contributor once he fully recovers.

“What we’re trying to do is get the best football players long term,” he added. “We looked at a lot of backs that were out there and we thought he could help us the most. That’s why we brought him in.”

Choice, who is listed at 5-foot-10 and 218 lbs., was drafted in the fourth round of the 2008 NFL Draft. Coming out of college, the Georgia Tech standout was considered by many to be a quality product.

Looking back on some of the scouting reports that were published prior to the ’08 draft, there was a lot to like about Choice.

For example, here’s the write-up that SI.com posted:

POSITIVES: Well-built, productive runner with solid instincts. Runs with good lean, patient, and waits for blocks to develop. Finds the running lanes, quickly gets through them, and creates yardage on the inside. Displays outstanding vision, makes defenders miss in the open field, and shows a burst. Can turn the corner and stays on his feet off the initial hit.

NEGATIVES: Not a smooth cut-back runner. Was nicked up with minor injuries last year and may not be able to take a heavy workload at the next level.

ANALYSIS: Choice made the most of his opportunities at Georgia Tech and gets a lot out of his abilities. He may never be a starter at the next level, but he has enough skill to be a productive backup.

Admittedly, I haven’t seen much of Choice during his time in Dallas. In fact, outside of his fumble that was recovered by Redskins cornerback DeAngelo Hall and returned for a touchdown during the first game of the Shanahan Era, I can’t even say Choice has done anything to stand out one way or the other in the games I’ve seen him play against Washington.

So I reached out to one of my closest friends, a guy who happens to be a diehard Cowboys fan,* to get a little insight on the newest member of the burgundy and gold.

*I’m convinced his parents didn’t love him enough as a kid. Why else would he openly cheer for that team?

Here’s what he had to say about Choice:

“Tashard has always produced in his limited role, and I think he’s going to make the Cowboys pay for releasing him. He’s got great vision and he’s a smart runner. He’s probably the most durable and well-rounded back we had. He was having a bad year, but that’s because (head coach) Jason Garrett only brought him in when everyone knew it was a running situation. And he only had 28 carries. For the record, I picked Choice up on my fantasy football team. He’ll be good for you guys, if you remember that you are a running team and not a passing team.”

The way I see it, Choice is a low-risk, high-reward addition. He’s young, has loads of potential and fits the mold of the players Shanahan has sought since taking over the Redskins (see: Hightower, Jabar Gaffney, etc.)

Choice appears to be a solid player who will happily fill whatever roll his coaches ask of him – whether it be special teams, change of pace back or whatever.

He’s never had more than 92 carries in a season, but his career numbers – 250 carries for 1,139 yards with eight touchdowns – suggest if he was ever given a chance to be a feature back, he could carry the load.

To try and put things in perspective, if Choice posted those numbers last season, he would have ranked 13th in the NFL in rushing yards – ahead of Philadelphia’s LeSean McCoy, Chicago’s Matt Forte, Tampa’s LeGarrette Blount and Buffalo’s Fred Jackson.

That’s not bad company for a player who the front office essentially acquired for free. They’ll pay a prorated portion of Choice’s $600,000 salary for the season and see if he’s worth keeping around beyond that.

Choice also rushed for more than five yards per carry in each of his first two NFL seasons, which is why Redskins fans shouldn’t panic when they see his 2.7 yard per carry average this season.

Everyone might have to wait a week or two to see how Choice fits in and what role the coaching staff envisions for him here in Washington, but it wouldn’t surprise me if he stepped right in and became a solid contributor.

Of course, that hinges largely on his coaches showing a willingness to stick with the ground game and whether or not the offensive line can give him enough time and space to make a play, but those are issues for another day.

Instead Redskins fans can simply hope that Choice is able to get well soon because the Cowboys are coming to town later this month.

And while he leaves Dallas with no ill will, it’s safe to say Choice wouldn’t be opposed to making a strong first impression with his new team at the expense of his old one.