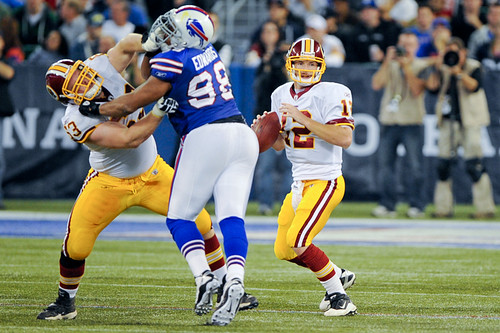 As a kid, I loved Halloween.

I enjoyed picking out a costume each year and looked forward to hitting up as many houses in my neighborhood as possible in hopes of scoring enough candy to last a lifetime.

Sadly, those days are long gone and Halloween has taken on a much less enjoyable meaning for me.

Now, Halloween effectively represents the end of the competitive portion of the Washington Redskins’ schedule.

It was true last season when the Redskins lost to the beleaguered Detroit Lions 37-25 in the game that saw “franchise quarterback” Donovan McNabb get benched while his head coach openly questioned his conditioning and intelligence.

And it’s true this season after the Redskins got beat down to the tune of 23-0 to a Buffalo Bills team that had allowed an average of more than 24 points per game in their first six outings.

Last season, Washington was 4-3 heading into their Halloween showdown in the Motor City. The Redskins had wins over talented teams such as the Philadelphia Eagles on the road and the eventual Super Bowl champion Green Bay Packers at home.

But by the time November rolled around, McNabb was left to quietly count down his remaining days in D.C., and ‘Skins fans were left hoping Rex Grossman could at least manage games well enough to keep the team competitive.

Of course, the Redskins lost seven of their last nine games and the beginning of the Mike Shanahan era looked a lot like Year 1 of Jim Zorn or Steve Spurrier.

Here we are, one year later, and things actually look worse for the burgundy and gold.

Grossman, the same quarterback who stepped in for McNabb last season once the coaching staff lost confidence in the veteran, has now assumed the role of former starter who played himself out of a job.

And his replacement, the unheralded John Beck, looks every bit as overmatched as Grossman did during his brief tenure in the starting lineup.

The Redskins offense is so inept that it’s impossible to identify one single thing they do well.

Anytime Beck tries to take a shot down field, he’s unable to come within 10 yards of the intended target. That means the passing game can only hope to move the ball by dinking and dunking down the field, which makes it easy for defenses to get overly aggressive.

The ground game – a staple of every Mike Shanahan-led team during his impressive NFL coaching career – is nonexistent.

In the last three games, Ryan Torain has rushed 20 times for 31 yards (1.5 yards per carry). During the same three-game losing streak, Roy Helu has just three carries for five yards. And for all the talk about Beck’s mobility, the only time it’s on display is when he’s chasing down a football he’s fumbled with no defender in sight.

Add in an offensive line that’s allowed 14 sacks over the last three games and it’s not unreasonable to suggest that this might very well be a new low for the Washington Redskins.

Unimaginative playcalling, mental errors and uninspired play for nearly everyone involved makes it nearly impossible to make it through an entire Redskins game sober.

This is coming from someone who is actually on the sidelines each and every Sunday. I can’t even begin to comprehend that there are fans out there still willing to pay good money in this economy to see such a sorry excuse for an offense in action.

And the best part is – the Redskins still have nine games left on the schedule.

The one weapon this team has left, tight end Fred Davis, was seen in a walking boot Monday which means there’s a chance he misses this weekend’s game against San Francisco.

Shanahan said the 24-year-old has a Grade 1 ankle sprain, which makes it difficult for an athletic tight end like Davis to make his cuts. Should Davis miss any length of time recovering from this injury, it’s safe to say the Redskins might never cross midfield again.

That’s what happens when you subtract Davis, who has 20 catches for 269 yards and a touchdown over the last three weeks, from the lineup.

Honestly, as much as I like Davis – and anyone who knows me knows I’ve been one of his biggest supporters since he came into the league – I’ve accepted the fact that with or without him, my favorite football team is dreadful.

Even though the Redskins started the season 3-1, I’d now accept another 6-10 season in a heartbeat. That’s how quickly the bottom has fallen out in Washington.

Who knew this team would peak in the season opener? Who could imagine that just seven games into a season the team would be so thoroughly outmatched that people are legitimately wondering whether or not players have quit? And how much longer do Redskins fans have to suffer through such heartbreaking disappointment before their favorite football team finally does something worth cheering for?

This is why I’m completely on board with trading away anything and everything to get Stanford quarterback Andrew Luck.

I’ve never written a word about the guy until now, but after giving it some serious thought, I’d be completely on board with trading away as much as four first-round picks to finally get a quarterback who is actually good at football.

If a past-his-prime guy like McNabb is worth two high draft picks in Washington, then the closest thing to a can’t-miss prospect since Peyton Manning or John Elway is easily worth double that.

Why continue to trot out dregs like Grossman or Beck who can’t even manage to be mediocre when you have a shot at acquiring a quarterback who could be the face of the franchise for the next decade?

Honestly, there’s not a player on the current roster that I wouldn’t give up in a deal for Luck. Guys like Brian Orakpo and Ryan Kerrigan are good, but Luck will be better. And he’ll make everyone around him better.

The beginning of Shanahan’s tenure in Washington hasn’t been any better than that of Zorn or Spurrier. But all of that can change with one bold move from a franchise that’s never been afraid to take a risk during the offseason.

‘Skins fans can only hope that this time around, the franchise is willing to do whatever it takes to become offseason champs one more time.

If that happens, then maybe a Redskins team can actually remain competitive into November.