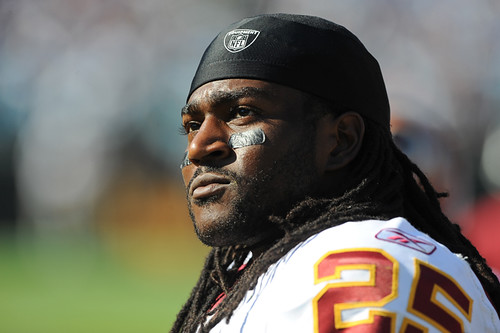 In the days leading up to last weekend’s game, I talked to several fans of the Washington Redskins who expressed a new-found optimism in regards to their favorite football team.

Thanks to head coach Mike Shanahan’s decision to turn to John Beck as his starting quarterback, more than a few ‘Skins fans seemed to believe that better days were ahead for the burgundy and gold.

If I’m being completely honest, I didn’t fall into the same category.

Don’t get me wrong – after watching Rex Grossman turn the ball over 11 times in five games, I was on board with giving Beck a chance to sink or swim.

I’m just not sure he’s going to be much better than the guy he’s replacing.

While some look at Beck and see untapped potential, I see a guy who has yet to distinguish himself since he came into the league more than four years ago.

Some see a player who they feel has never been given a fair shot. But I see a guy who couldn’t beat out Cleo Lemon, Trent Green, Chad Henne or Chad Pennington in Miami, Troy Smith for the backup role in Baltimore or Rex Grossman during training camp.

Beck sure seems to be a swell guy, but his teams are winless in all seven games he’s played in and I’ve seen nothing over the last year and a half to suggest that he’s capable of becoming the NFL’s next feel-good story.

In fact, I’d argue that the only victory Beck has ever had came during the lockout – when the 30-year-old went from an unknown third-stringer to the presumed starter without ever throwing a single pass in an actual game.

Aside from a solid preseason performance against an Indianapolis Colts team that looks to be historically bad, Beck has been completely average in every sense of the word.

Even his stats from last weekend – against an unremarkable Carolina defense – are nothing out of the ordinary.

The only real difference between the two mediocre quarterbacks is that Beck is much more mobile, which is great because the Redskins offensive line at this point is best described as a work in progress.

So while many Redskins fans continue to hold out hope that Beck can provide a much-needed spark to Washington’s anemic offense, my hopes of better days were crushed when running back Tim Hightower’s left knee buckled during the third quarter in Charlotte.

While neither Redskins quarterback inspires much in the way of confidence with me, Hightower was the one player in the backfield who I truly believed could be a difference maker this season.

I thought the trade with Arizona to acquire the 25-year-old back for Vonnie Holiday, a defensive lineman who didn’t appear to be in the team’s plans, was an absolute steal.

Before the season began, I envisioned Hightower as a 1,000-yard rusher who would help propel Washington’s ground game into the NFL’s top 10 for the first time under Shanahan.

And just like that, Hightower’s season is over thanks to an ACL tear.

A game that started with such promise – Hightower picked up 67 yards on nine first-quarter carries against the Panthers – ended with heartbreak for a player who had never missed a game prior to this season.

The fourth-year pro played in five games this year – with 84 carries for 321 yards and two touchdowns (one rushing and one receiving).

In his brief time with the Redskins, Hightower showed he had solid hands out of the backfield, proved to be dependable in pass blocking and assumed a leadership role in the locker room.

“Any time you lose a player that has the type of energy that Tim does and has the type of game that he has, obviously everybody is disappointed,” Shanahan said. “Tim is a guy that’s been very physical, you could see how emotional he was in that game and how well he blocked and how hard he ran. It’s always tough to lose a guy like that.”

Replacing him, in the lineup and in the locker room, will be no easy task for a Redskins team that appears to be on the verge of a total collapse after back-to-back losses to one-win teams.

“Tim has handled himself extremely well. He played very good in this game coming back from the shoulder injury. He was ready to play and was playing well so it’s always tough to lose a player like that who leads both on and off the football field.”

Unless the coaching staff opts to bring in a veteran running back, the Redskins will now turn to Ryan Torain and Roy Helu to carry the load.

Given the choice between the two, I’d love to see Helu elevated to the starting lineup. The rookie has shown flashes during his limited time in Washington, and he clearly has more upside than Torain.

With seven different runs of 50 yards or more his senior year at Nebraska, Helu has shown he’s much more of a home-run threat than Torain.

Even though he sat out of the finale, Helu still finished with the seventh-most rushing yards in the NFL during the preseason – with 173 yards on 25 carries (4.9 yards per carry).

While I readily admit that preseason success means nothing, it is worth noting that Helu’s regular season numbers – 27 carries for 131 yards (4.9 yards per carry) – only re-enforce my belief that good things will happen if Helu becomes the starter.

Of course, even if the team turns to Torain, there’s a good chance an injury will sideline him any day now. So it’s not a stretch to believe that Helu will end up with the job one way or the other.

Either way, the Redskins are going to need production from the ground game if this offense is going to become anything more than an embarrassment.

Watching Beck and friends turn the ball over on downs because they couldn’t pick up 10 yards while trailing the 1-5 Panthers by two scores was officially the moment I lost hope in the 2011 season.

That’s when I told myself that this year’s team was no different than any other Redskins squad that has tortured me since the fateful day when Hall of Famer Joe Gibbs retired for the first time.

I’d love to see this team bounce back after two disheartening losses, but injuries, inconsistency and an overall lack of talent suggests that’s likely more than this team can handle.

“This is a different group,” said cornerback DeAngelo Hall. “This isn’t a group that’s going to hang their heads and feel sorry for themselves. We’re going to bounce back.”