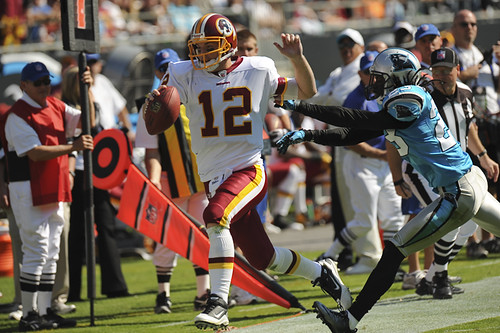 One week after a disappointing loss to a last-place team, the Washington Redskins traveled to Carolina for a chance at redemption.

On the surface, the rebuilding Panthers – with just three wins in their last 22 games – were just what the doctor ordered for a Redskins team in dire need of a victory.

Carolina was in the midst of a three-game losing streak and just 1-5 on the year, so if ever there was a winnable game on the schedule – this was it.

Panthers rookie quarterback Cam Newton came into the contest tied with the recently benched Rex Grossman for most interceptions thrown and the Panthers were 29th in the NFL inrushing defense.

All the Redskins needed to do was get off to a quick start, which would force an overly aggressive rookie to take chances while playing from behind and then seal the game with a healthy dose of the ground game.

Instead, Washington stunk up the joint in the first half, once again, and let a doormat team hang around until the opposing offense got going.

Redskins players were careless with the football on offense and the defense reverted back to the first half of the Eagles game when they appeared incapable of getting off the field.

The Panthers found success in both their running and passing games, and a once-promising season appears to be on the verge of a complete collapse for the burgundy and gold.

Carolina’s 33-20 victory over the Redskins isn’t going to be easy to move on from. Not when head coach Mike Shanahan’s squad was so thoroughly outclassed from start to finish by a team that the rest of the NFL has had little trouble handling.

Heading into the game, all eyes were on Redskins quarterback John Beck, making his first start since 2007.

After providing a spark to Washington’s offense in the fourth quarter one week earlier, the hope was the 30-year-old signal caller would build off of that effort and finally show the Redskins offense that it’s okay to put points on the board.

And statistically speaking, Beck had his best day as a pro. He completed 22 of 37 passes for a career-high 279 yards with two touchdowns (a four-yard run and a seven-yard pass to tight end Fred Davis).

But he also turned the ball over twice, never really challenged the Carolina defense and at no point resembled anything other than a mediocre quarterback.

Late in the first half, the Redskins offense had roughly 80 yards on the ground to go with 70 yards in Panther penalties. And what about Beck and the passing attack?
The career backup had a grand total of 17 passing yards, which is nearly impossible to comprehend in today’s pass-happy NFL.

While seemingly every other team in the league is moving the ball and scoring points at will, the Redskins could barely muster two first downs through the air.

The offense was still unable to find any sort of rhythm, was painful to watch and the kicker was still the team’s most consistent weapon.

For all the angst Grossman has caused ‘Skins fans this season, his stats against Arizona and Dallas earlier in the year were remarkably similar to what Beck racked up against Carolina.*

So feel free to talk yourself into just how much better Beck is than Grossman, but leave me out of it. Neither quarterback is any good and if Redskins fans are lucky, neither quarterback will be in town this time next year.
3. “Hurt” by Johnny Cash

The worst part of this disheartening loss for me personally involved running back Tim Hightower, who looked explosive at times during the first half.

While the rest of the offense was stuck in neutral, Hightower was finding running lanes behind a patchwork line and running with a purpose.

Hightower rushed for 67 yards in the first quarter – the most he’s ever picked up in the opening frame. And yet, offensive coordinator Kyle Shanahan continues to go out of his way to take the football out of the hands of his running backs in favor of the lackluster passing game.

After rushing nine times in the first quarter, Hightower was given the ball just five times in the second. If anyone can provide a legitimate reason as to why an offensive coordinator would willingly shy away from a running back picking up more than seven yards a carry, I’d love to hear it.

Because, as far as I’m concerned, it’s just the latest example of this coaching staff outsmarting itself.

From the sidelines, I joked on Twitter that if this was a video game, I would have handed off the ball to Hightower 40 times. The Panthers clearly had no answer for the 25-year-old and he seemed more than capable of carrying the load for one of the least creative offenses Redskins fans have ever had to suffer through.

But Shanahan got away from the ground game and then a third-quarter injury sidelined Hightower (believed to be a sprained knee), which ended any real chance Washington had to win the game.

As if Hightower’s injury wasn’t bad enough on its own, he became the latest offensive starter to be knocked out of the lineup due the injury.

Shanahan’s offense was abysmal when everyone was healthy. Now? Forget it.

Anyone hoping to see a Washington offense that can actually put points on the board might as well sell their Redskins tickets and start investing in the Capitals. Because this isn’t getting any better any time soon.

While the bulk of the attention in D.C. will be spent dissecting the Redskins’ inept offense, the fact is, the team’s supposedly dominant defense has allowed 829 total yards over the last two weeks.

They’ve given up 53 points in back-to-back losses to one-win teams and have no answer for top-tier talents like Carolina’s Steve Smith, Philadelphia’s LeSean McCoy and/or Arizona’s Larry Fitzgerald.

Last week, the Redskins’ defense allowed the Eagles to score on four of their five first-half possessions. This week, the Panthers scored on seven of 10 possessions, and Washington has now allowed nine drives of 50 yards or more in the last two weeks.

So let’s go ahead and hold off on any more talk of the Redskins defense ranking among the league’s elite. Much like the rest of the organization at this point, the defense is nothing special.