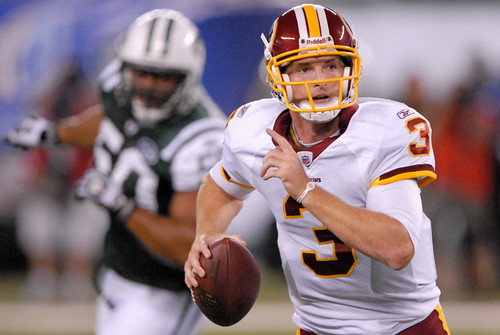 When the Washington Redskins take on the Carolina Panthers this weekend, they will do so with a change at quarterback.

After throwing four interceptions against Philadelphia, the Rex Grossman experiment has been put on hold indefinitely in favor of John Beck.

Interesting enough, although Beck came into the league in 2007, he’ll be making just his fifth NFL start – one less than Panthers rookie Cam Newton.

So it’s safe to say no one really knows what to expect from the fifth-year pro when he leads the burgundy and gold onto the field in Charlotte.

Beck has never thrown for more than 177 yards in a game and his teams are winless in games he’s played in (0-6), but the biggest thing going for the 30-year-old is simply put – he’s not named Rex Grossman.

Chalk this one up to change for the sake of change, because Grossman reverted back to the norm and went from “game manager” to “offensive anchor.”

Rather than leaning heavily on a potent ground game and utilizing The Rex Cannon sparingly, the coaching opted to roll the dice and put the ball in Grossman’s hands.

Nine interceptions and two fumbles later, even Mike and Kyle Shanahan have to admit that maybe that wasn’t the greatest idea.

Now Redskins fans get to see what Beck can bring to the table.

“I thought John did a good job with three of our starters out in the fourth quarter against Philadelphia,” said head coach Mike Shanahan. “To come in a situation when they knew we had to throw the football – he had nine first downs. [We] could have attempted a field goal on the one. He took us down the field, a 75-yard drive for the touchdown. He impressed with that. [We] put a lot of pressure on him in that situation.

“I like the way he has been practicing the last few weeks,” Shanahan added. “He’s done a good job in practice and I think he deserves the opportunity for us to see what he can do.”

Unfortunately for Beck, who will be making his first start since his rookie season with Miami back in ’07, he’ll do so without several key members of the offense.

Tackle Trent Williams, guard Kory Lichtensteiger and tight end Chris Cooley are all out of the lineup, meaning protecting the quarterback might be more challenging than usual for Washington.

For better or worse, the head coach doesn’t seem to be overly concerned about using an unknown commodity at quarterback and protecting him with a patchwork offensive line.

“I think a big plus for John is his mobility,” Shanahan said. “He can make plays with his feet. He has a good command for the offense. I think he feels more comfortable with it now than he has since he’s been here. So now he’s going to get his chance.”

If Beck is interested in seeing a dual-threat quarterback in action, all he needs to do is watch the film on Newton.

Only Minnesota Vikings running back Adrian Peterson has more rushing touchdowns than Newton’s six scores this season, meaning the Redskins will have their hands full any time the Auburn standout has possession of the football in the red zone.

“He’s a big guy that’s hard to get down,” said defensive coordinator Jim Haslett of Newton. “It’s kind of funny when you watch the tape. You see guys hit him and they kind of bounce off. You kind of wonder, does he know he’s getting hit? That’s a big guy.”

Beck and Newton both have the ability to extend a play with their feet, but they also have something else in common – they both throw interceptions more often than touchdowns.

While the offensive coaches will spend the bulk of this week trying to concoct ways to keep Beck upright, the defense will definitely have its hands full with Newton.

The Heisman Trophy winner might have struggled to complete passes during the preseason, but Newton threw for more yards in his first two NFL starts (854 yards) than Beck has racked up in his entire career (676 yards).*

*Considering Newton was a freshman at Florida who was riding the bench behind Tim Tebow when Beck was drafted by the Miami Dolphins in the second round of the 2007 Draft, that’s probably not a good thing.

“He looks like an exceptionally talented rookie,” said defensive lineman Barry Cofield. “He’s got all of the tools physically and he’s everything you want in a quarterback plus more, but he has made some mistakes and has had some turnovers. We just need to try force those and capitalize on them.”

Newton isn’t the most polished of players and still has a lot to learn, but he’s definitely looked like a franchise quarterbacks for the Panthers.

“He’s made a whole lot of plays,” said cornerback DeAngelo Hall. “I think the biggest problem he poses isn’t necessarily the scrambling – it’s his ability to keep the play alive. He doesn’t really look to run as much as [Eagles quarterback] Mike [Vick] does. But at the same time, little guys like me and others in the secondary, when that guy is coming at you, he’s 6-foot-5 and 250 lbs., that’s a different beast.”

This is coming from a guy who was dragged by Jake Delhomme the last time the Redskins traveled to Carolina. Newton outweighs Delhomme by at least 35 lbs., so it’s safe to say Hall might want to avoid Newton is the open field.

“Having more than one guy at the ball will help,” Cofield said. “Other than that, you’ve just got to hit him in his midsection. You can’t hit him high. You can’t hit him low. I think a lot of it against guys like him is twisting. We used to always call it ‘gator tackling’ where you roll and twist him down to the ground so he can’t throw it away or get rid of the ball. It’s going to be challenging, but I think we’re ready.”

It should come as no surprise that whichever team gets better production for their quarterback will likely walk away victorious come Sunday.

Last week, Washington’s offense picked up more first downs in Beck’s one quarter of action (nine) than they did the rest of the game combined (eight).

Beck was also able to get players such as Santana Moss, Donte Stallworth and Terrence Austin involved, as opposed to Grossman who seemed only interested in completing passes to tight end Fred Davis and Eagles safety Kurt Coleman.

Even with unheralded players such as Erik Cook and Sean Locklear prominently involved, the Redskins offense was finally able to move the ball and put some points on the board.

If Beck can build off of that performance, there’s a good chance Washington can avoid losing to a one-win team for the second-consecutive week.

If not, well, then there’s 10 games left to determine whether Beck and/or Grossman should will still be around this time next year. For the sake of everyone involved, let’s just hope it doesn’t come to that.