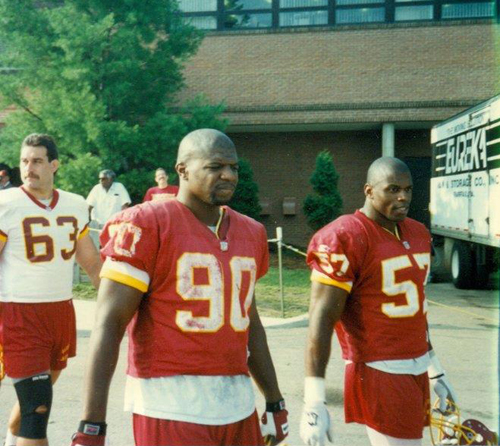 You might remember actor Terry Crews from movies such as The Expendables, TV shows such as Everybody Hates Chris or commercials such as his highly-entertaining work with Old Spice.*

But whenever I think of Crews, my first thought is always “That guy used to play for the Washington Redskins.” And whenever I tell people that, they never believe me.

Well, here’s a photo of Crews walking alongside linebacker Ken Harvey that the former defensive end posted earlier today on his Facebook page with a caption that read “Here I am scared I’m about to get CUT!”

Crews was with the Redskins for one season — back in 1995. The 27-year-old is credited with one tackle in 16 games played during a season that saw head coach Norv Turner’s team go 6-10.

In all, Crews spent six years in the NFL — spending time with the L.A. Rams, San Diego Chargers , Philadelphia Eagles and the Redskins — before turning his attention to Hollywood.

While it’s cool to see the Redskins use someone like Bruce Buffer for this year’s player intro video, it goes without saying that someone as awesome as Crews — especially considering his ties to the franchise — should be involved in a future video. If he’s willing to sit on a tiger or beat down the word odor for Old Spice, I’m sure he’d be willing to have some fun for the burgundy and gold.