it wasn’t pretty, but caps rally to win 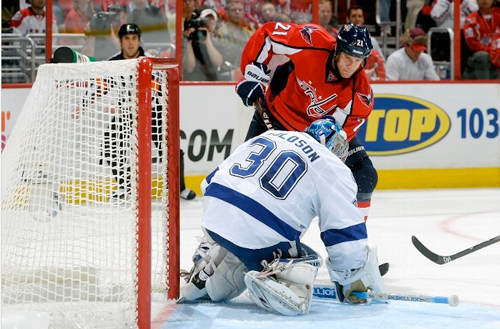 If the first two games are any indication, this is going to be a thrilling season for the Washington Capitals.

Twice now, fans have been kept on the edge of their seats as the Caps have managed two high-flying victories to start the 2011-12 season — including Monday’s 6-5 shootout win over the Tampa Bay Lightning.

Neither game was perfect by any means, but both were highly entertaining for everyone involved.*

*Well, maybe not for Caps coach Bruce Boudreau. He can’t be pleased with some of the questionable decisions and mental errors his players have committed so far.

The Capitals were able to hold on for a 4-3 overtime win over the Carolina Hurricanes in the season opener, thanks in large part to defenseman Mike Green, who scored a powerplay goal with 2:24 left in the extra session.

Two nights later, Washington found a way to win when their goalie, Tomas Vokoun, was anything but steady in his Capitals’ debut. By my count, the veteran gave up no less than three goals that’ll keep him up late at night — all three from terrible angles. All three could only be referred to as garbage goals. Vokoun said it’s the worst game he’s played in five years, and I’m not sure how anyone could really argue with him.

But the Caps were able to outlast their divisional rival because of grinder Jason Chimera and the checking line. Paired with forwards Brooks Laich and Joel Ward, Chimera continues to play some of his best hockey since coming to town. The 32-year-old already has three goals in just two games, but none were more vital than his tally with less than three minutes remaining in regulation against the Lightning.

Chimera scored an unassisted goal from close range to pull Washington even 5-5, and the Capitals were suddenly back in business in a game they repeatedly tried to give away.

Even when forward Alexander Semin took his obligatory penalty at the worst possible time — getting called for hooking in overtime — the Caps were still able to overcome and conquer the team that swept them in the playoffs last season.

It wasn’t pretty, but it counts in the standings just the same. That being said, there is plenty to improve upon moving forward.

How often are the Capitals going to emerge victorious on a night when forward Alex Ovechkin, center Nicklas Backstrom and Semin combine for zero points, six penalty minutes and a -6 rating? How many times will Washington win a game when they fail to score on any of their seven powerplay chances? Let’s hope we don’t have to find out again.

These are some of the points Boudreau will gladly begin pounding home the first chance he gets. This team is as talented as any Boudreau has coached since taking over in Washington, but that’s only half the battle.

Those talented players need to make smarter decisions when they’re on the ice — especially the guys on the top of the salary chart.

Backstrom killed two Caps powerplays single-handedly by taking dumb penalties. Semin continues to infuriate fans and coaches alike by taking selfish penalties when his team can least afford it and then there are the t0o many men on the ice penalties.

And honestly, if anyone can explain how a veteran team like the Capitals can get called for too many men on the ice in both the third period and again in overtime, I’d love to hear it.

Because that’s the easiest penalty in the book to prevent. All you have to do is count how many guys are out on the ice and make sure when one guy comes off, only one guy jumps on. It’s something five-year-olds can master without issue, so I’m having trouble understanding why it happened multiple times in key moments.

But that’s what you get with a Boudreau-coached team. Sure, last season was all about the team’s newfound commitment to defense, but the truth is, this squad loves nothing more than playing fire-wagon hockey. They dream of teams who are bold/crazy enough to get into a fast-paced, end-to-end thriller where the first team to score 10 goals wins.

Not many teams out there are willing to try and trade goals with the Capitals, but Tampa Bay clearly isn’t afraid to give it a try.

The Capitals have staked their claim as the team to beat in the Southeast Division, but Tampa isn’t far behind. And even though they fell short on this night, they know that they could have won on a night when they clearly weren’t playing their best hockey. This match-up is going to be intense all season long, but as long as the grinders like Chimera, Laich and Ward are producing, the Capitals will always have a chance to win.

And let’s not forget center Marcus Johansson, who was superb against Tampa Bay after being benched in game one. He came out flying from his first shift, and along with the grinders, played with a purpose throughout the game. Those four players combined for three goals and three assists, which was enough to overcome poor goaltending and zero production from the biggest names on the roster.

Washington’s lineup is clearly deeper than it has been in the past, which is great on a night when the top line is missing in action. When defensive-minded players such as Karl Alzner and Jeff Schultz are setting up goals, you know you’ve got a chance to win.

Conversely, when your goalie is giving up multiple goals on shots from behind the goal line, you know you’ve got a chance to lose just as easily.

Here’s hoping this is just a case of a team working through some early-season kinks and shaking off the rust as opposed to developing some of the poor habits that have plagued this squad in the past. While it’s always nice to see the home team win, there’s already plenty of room for improvement.