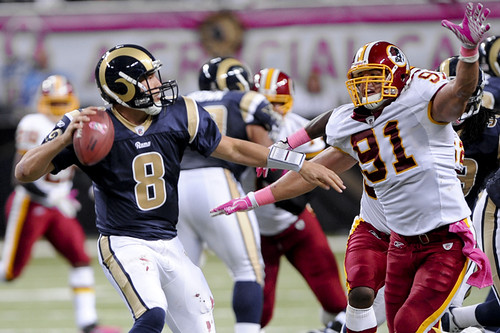 Since 2000, the Washington Redskins have had a defense good enough to rank in the NFL’s top 10 an impressive nine times.

But, as most ‘Skins fans can attest, the stats in this instance only tell half the story.

While the Redskins were routinely ranked among the league’s elite on the defensive side of the ball, they didn’t exactly strike fear in the heart of the opposition the way some of the Pittsburgh and Baltimore defenses did.

Too often, those Washington defenses struggled to make a stand with the game on the line. They’d play great for three quarters, and then give up a big play at the worst possible time to spoil an otherwise stellar performance.

Well, the Redskins are only four games into the 2011 season, but this defense has definitely started to develop an identity that’s easy to get excited about.

Led by outside linebackers Brian Orakpo and Ryan Kerrigan, the Redskins finally have the kind of stand-out players that opposing coaches lose sleep over. Those two guys spend so much time in the opposing backfield, it’s no wonder the burgundy and gold are 3-1 even though the offense is — to put it kindly — still a work in progress.

During Jim Haslett’s first season as defensive coordinator in Washington, the Redskins finished the season with the 31st-ranked defense. Highlights were few and far between and the unit couldn’t make a timely stop if their NFL lives depended on it.

Well, it’s clear that Haslett finally has the players who can properly execute in his 3-4 scheme.

Against the St. Louis Rams, the defense was playing at a level rarely seen in today’s pass-happy NFL. They sacked Rams quarterback Sam Bradford seven times, completely shut down the St. Louis ground game and allowed just 99 yards of total offense through the first three quarters.

Sure, the Rams finished the game with nearly double that (172 yards of offense), but that was only because the Redskins offense was so inept they forced the pitiful Rams back into the ballgame.

The seven-sack performance is the most the Redskins have in a game since picking up eight against quarterback/fatty JaMarcus Russell and the Oakland Raiders back in 2009, and the team now has 15 sacks on the year (tied for the most in the NFL).

Kerrigan added six tackles, a sack and a forced fumble, which was recovered by defensive lineman Barry Cofield. Rounding out the day was defensive lineman Adam Carriker, who also had a sack against his former team.

One week after everyone second guessed whether or not Haslett should have sent eight blitzers against Dallas quarterback Tony Romo, the Redskins were able to get consistent pressure without having to send more than four pass rushers on most plays.

Bradford was roughed up so badly that he had blood stains all over his pants by the end of the game. I joked with some of the Redskins defenders that, by that point, they looked like sharks who smelled blood in the water.

“Any quarterback who gets hit that much is going to get rattled,” Cofield said. “Even the best quarterbacks in the league can get roughed up and lose it. I think Bradford is extremely talented and he’s got all of the tools, but when you hit him like we did, he’s going to have a hard time.”

And because so many players are excelling at the moment, an offensively challenged team like St. Louis basically has to pick their poison when they decide which players to double team and which players to single cover.

“Yeah, it’s a good feeling,” Cofield said. “They were keeping extra guys in and trying to protect [Bradford], but we were still able to get some pressure. There’s a lot of times when guys were getting double teamed, but whoever was in one-on-one block was getting home free.

“I’ve never had a shutout in my almost six years,” Cofield added. “I was definitely highly upset when we lost it and they were able to pile on some yards. I definitely wanted to hold them down as much as possible. This is an offensive league now-a-days and people put up lots of points and a lot of passing yards. So when you’re able to do what we were doing, it’s a great feeling.”

Cofield shouldn’t feel bad about not being involved in a shutout yet. The last time the Redskins shut out an opponent was Sept. 30, 1991.*

*To put that in proper perspective, Kerrigan was only three years old when Washington blanked the Philadelphia Eagles 17-0. So yeah, it’s been a while.

In fact, the Rams game marked the first time Washington was even able to keep an opponent off the scoreboard in the first half of a game since Sept. 12, 2010 (a span of 18 games).

Not only did the defense dominate a Rams team that might very well be the worst in the NFL, but they’ve put together two above-average outings in a row.

Heading into the bye week, Washington’s defense has given up just one touchdown in their last eight quarters, ranks fifth in the league in yards allowed per game (296.5) and third in points allowed (15.8).

“We are going to defend every blade of grass,” said middle linebacker London Fletcher, who also happens to be the captain of the new-and-improved defense.

I haven’t even mentioned guys like Fletcher (a machine who is as good at 36 as he was at 26), linebacker Rocky McIntosh (who is off to a strong start) or safety LaRon Landry (the player who strikes the most fear in opposing players because of the punishing hits he loves to deliver).

Each of these guys is able to thrive on days when the guys up front are winning their individual match-ups and clearing the way for one of them to make a play.

“When we’re playing like that, we’re able to let the guys on the back end do what they do,” Bowen said. “I don’t really think you can ask more of our defense than the way we played today.”

If you ever wondered why head coach Mike Shanahan and friends were so disgusted with defensive lineman/malcontent Albert Haynesworth, it’s because they knew how good this 3-4 defense can be when everyone buys in. It’s taken 20 games, but the rest of us are finally starting to see it for ourselves.

That’s great news for Redskins fans. But for quarterbacks like Sam Bradford? Not so much.