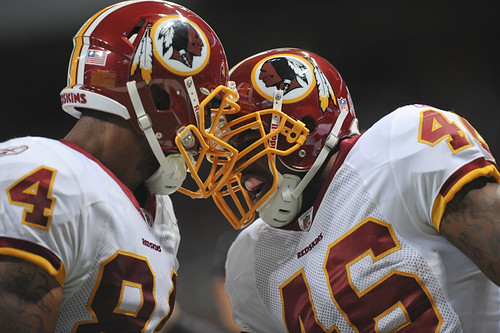 The St. Louis Rams have basically been a doormat since quarterback Kurt Warner went back to bagging groceries, and yet, in each of the last three seasons they’ve given the Washington Redskins as much trouble as any team in football.

In 2008 and 2010, the Rams defeated the Redskins in what was essentially the low point of the season, and in 2009, the Redskins narrowly edged St. Louis in a 9-7 barn burner.

Because the football gods have a sense of humor, these two struggling franchises met for a fourth consecutive season* in a game that could conceivably be referred to as a “must-win” for Washington.

*And eighth time these two teams have squared off since 2000. The only other two non-divisional teams who seemingly face off that often are the New England Patriots and Indianapolis Colts. Somehow I think that’s a more enjoyable match-up for the football-watching world.

Washington’s offense — especially the passing game — never really seemed to have any sort of rhythm against the Rams, which is especially troublesome when you factor in how disjointed the offense was a week ago in Dallas as well.

Quarterback Rex Grossman did nothing to quiet the vocal minority of ‘Skins fans who think the team would be better off with John Beck (or anyone other than Grossman) running the show.

The ninth-year pro completed 15 of 29 passes for 143 yards, with a touchdown, two interceptions and a quarterback rating of 48.5.

In his last three starts,  Grossman hasn’t had a QB rating over 80, a completion percentage over 60 and he’s turned the ball over six times. How the Redskins are 3-1 with their quarterback giving them so little, is beyond me.

Take, for example, Grossman’s stats in the pivotal fourth quarter in St. Louis — one completion on five attempts for eight yards with two interceptions.

If you’re wondering how a team can nearly blow a 17-point lead in roughly 10 minutes, Rex is your answer. He forced ill-advised passes to receivers who weren’t open. He never looked comfortable in or out of the pocket. Basically, Grossman had a day all of us would rather forget.

The primary reason the Redskins were able to overcome The Rex Cannon’s less-than-stellar day in St. Louis was running back Ryan Torain.

After being buried behind Tim Hightower and Roy Helu on the depth chart, Torain finally saw his first action of 2011. And boy did he make the most of his opportunity.

Torain found the end zone on just his second carry of the season — a 20-yard run that put Washingotn up 14-0 in the second quarter.

For the day, Torain finished with 19 carries for 135 yards and a score. Thanks to Torain, the Redskins were able to rush the ball 40 times for 196 yards against the Rams, which was wise because St. Louis came into the game as the NFL’s worst run defense.

Considering how many people — myself included — questioned the team’s playcalling one week earlier when offensive coordinator Kyle Shanahan opted to ignore conventional wisdom and throw the ball while trying to hold a lead, it was great to see a running back step up and basically force the team to keep him involved in the action.

While Hightower and Helu struggled to find lanes to run through, Torain had little trouble gashing the Rams for large chunks at a time.

In addition to his 20-yard score, Torain also had the best run of the day for either team: a 39-yard pickup in the third quarter that put Washington in position to go up by three scores.

While he’d been a forgotten man through the team’s first three games, it’s a safe bet Torain will be much more involved moving forward.

On the other side of the ball, the Redskins defense turned in one of their best performances in a long, long time.

The Redskins picked up seven sacks against quarterback Sam Bradford, who was bloodied and rattled as the pass rush continued to thump him throughout the afternoon.

Linebacker Brian Orakpo, in particular, continued to show why teams spend so much time trying to figure out ways to keep him out of the backfield — finishing the day with three quarterback hits and 2.5 sacks.

Defensive end Steven Bowen had 1.5 sacks, defensive tackle recovered a fumble and defensive end Adam Carriker and linebacker Ryan Kerrigan each added a sack on a day that had to bring a smile to defensive coordinator Jim Haslett’s face.

Haslett, who was the interim head coach in 2008 when St. Louis became the first team to expose Jim Zorn’s Redskins, continues to get the best out of his defense, which has given up just one touchdown in the last eight quarters of play.

In fact, the Redskins held the Rams to just 99 yards of total offense through the first three quarters and played well enough to  earn a shutout. Unfortunately, the Redskins offense got careless with the football and the Rams scored 10 points in the game’s final 10 minutes, but that shouldn’t take away from the fact that the front four looked outstanding against St. Louis.

The Redskins now head into their bye week with a 3-1 record. They’ve had their ups and their downs through the first month of the season, but the Redskins are in every game.

Head coach Mike Shanahan has done a fine job of putting these players in a position to win games, and while there’s still plenty of work to be done, it’s refreshing to see the burgundy and gold find ways to win on days when not everything is going their way.

When the passing game is missing in action and the Redskins get penalized 10 times for 96 yards, Torain reappears to jump start the running game and the defense leaves the opposing quarterback a bloodied mess.

Even though the Redskins have looked completely mediocre in their last two outings, they’re still 3-1 and that’s a record any reasonable ‘Skins fan would have happily signed up for before the season began.