were redskins too afraid of the cowboys? 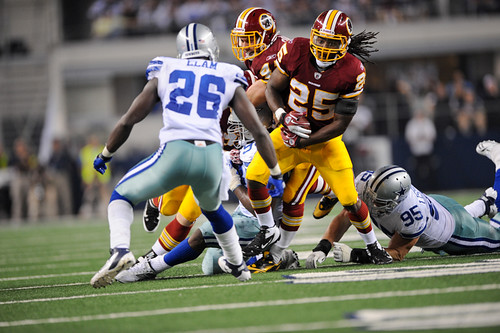 With apologies to cornerback DeAngelo Hall, who took issue with Washington Redskins defensive coordinator Jim Haslett’s aggressive mindset in the decisive moments of the team’s 18-16 loss to the Dallas Cowboys, I can’t kill the defense on a night they held an opponent out of the end zone.

Nine times out of 10, when that happens, you’re going to walk away with a victory.

Unfortunately for the Redskins defense though, their offense was just as ineffective as the one they shut out.

The Redskins offense put together one drive of substance — a nine-play, 76-yard drive that was capped off by quarterback Rex Grossman’s one-yard touchdown pass to running back Tim Hightower — and that was about it for the highlight reel.

An offensive unit that had little trouble putting together consistent drives in their first two games of the season struggled for most of Monday night’s contest, and I can’t help but wonder if offensive coordinator Kyle Shanahan’s game plan is the primary reason.

The 2011 Redskins are still in the process of developing their true identity, but what’s worked for this offense thus far is establishing the ground game early, and then once the defense is on its heels, turning the football over to Grossman so he can air it out.

None of this is exactly earth shattering — after all, head coach Mike Shanahan has had one of the best rushing attacks in the NFL for seemingly his entire illustrious career. The guy has a well-earned reputation for turning seemingly any running back into a thousand yard rusher, so focusing on the ground game early and often should be a no-brainer.

And yet, the Redskins gave up on running the ball. Even with the lead for the bulk of the fourth quarter, Kyle Shanahan and friends were content to call passing plays.

The Redskins ran the ball just twice in their final 16 plays of the game. Once it became clear that Washington was content to become one dimensional, the Dallas defense simply turned up the pressure on Grossman.

In related news, the Redskins’ last four drives ended with three punts and a fumble.

Nothing against Grossman, who has done a fine job of leading this offense for the most part this season, but he’s not exactly the type of player who should be asked to carry an entire offense on his shoulders — especially when his options in the passing game were severely limited.

Receiver Anthony Armstrong left the game in the second quarter with a strained hamstring. Tight end Chris Cooley was forced into the fullback role because of an injury to Darrel Young, so he spent as much time blocking as running routes. Santana Moss appeared to be double covered every time he left the huddle.

And worst of all, tight end Fred Davis was also a non-factor in the passing game, which was stunning considering he came into the game with the second most catches and receiving yards of any tight end in football.

The player who was the go-to guy for this offense in their two wins, was suddenly nowhere to be found when they needed him most. So what happened?

After the loss, Davis explained to me that the plan of attack against Dallas called for him to stay home as an extra blocker for the most part.

“We had a different game plan this week,” he said. “I just tried to do as much as I could do to help out. When you’ve got two good pass rushers like Dallas, you’ve got to do a little more blocking. That’s what I did tonight, and I think I did a good job, blocking wise. Sometimes you’ve just gotta do what you can do.”

While I understand wanting to help out the offensive line as much as possible — especially against Dallas linebacker DeMarcus Ware, who has led the NFL in sacks each of the last two seasons — I just wish the team could have figured out a way to do it without sacrificing Davis.

Even after his one-catch performance in Dallas, Davis still leads Washington’s pass catchers in most categories.

Davis has 214 yards and, most impressively, seven of his 12 catches this season have been for 20 or more yards. He’s become one of the few tight ends in football that can stretch the field every time he touches the ball.

“We had some stuff we wanted to call up, but you just can’t call it up unless you get the right look,” Davis said. “I guess they didn’t feel comfortable and some plays didn’t go the way we wanted them to. I wish I could have done more, but what can you do?”

Okay, a few times Grossman played with fire by forcing ill-advised passes to Moss, but you get my point.

By giving up on the rushing attack on a day when there weren’t many options in the receiving game, the Redskins were stuck in an up-hill battle.

And the craziest part is — Dallas was facing similar circumstances. They were trying to protect Tony Romo, much in the same way the Redskins were hoping to keep Grossman on his feet.

Dallas’ answer was to have Romo get the ball out of his hands as quickly as possible to ensure pass rushers rarely laid a hand on him. The Cowboys also had to deal with injuries to their top tight end, running back and receiver, so they clearly did a better job of facing adversity.

Romo was happy to spread the football around (eight Cowboys receivers caught a pass Monday night). And they never gave up on their rushing game, which is why Felix Jones was able to finish the game with 115 yards — with 95 of those yards coming in the second half.

Both teams wanted to protect their quarterbacks, but only one was able to do so without sacrificing half of their offensive weapons. Winning in the NFL comes down to which team can make the necessary adjustments as a game goes on, and Dallas — even on a night when they fumbled six times — was more successful with their in-game adjustments.

I completely understand not wanting to leave Grossman alone to fend for himself, but having the running backs help share the load and finding ways to involve talented players like Cooley and Davis are just a few of the ways the Redskins could have done a better job of holding the lead in the fourth quarter.

It’s always easier to second guess the coaching staff’s decision after a loss, but my hope is that moving forward the Shanahans can do a better job of game planning and putting their players in the best possible position to succeed.

If not, a guy like Hall might not be the only person in town with a few choice words.