redskins still not ready for primetime 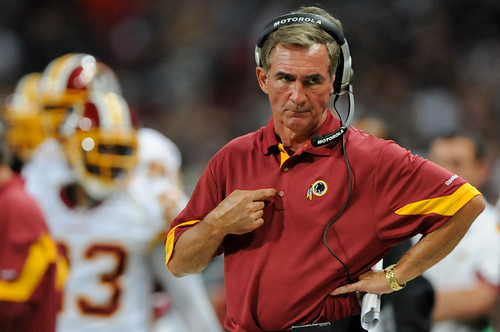 The Washington Redskins travel to Dallas to take on the Cowboys on Monday Night Football with a chance to improve their record to 3-0, while also gaining the upper hand on yet another divisional opponent.

Considering the Redskins haven’t been two games over .500 since 2008 that in itself is cause for celebration for anyone who has had to suffer through so unwatchable games over the last decade or so.

Yet, no one outside of the beltway region seems to think this year’s team is very good. Segments on both ESPN and the NFL Network this week have labeled the Redskins as “pretenders,” while unheralded teams such as the Buffalo Bills and Detroit Lions have been praised for their 2-0 start.

And why is that?

Because, too often, whenever the Redskins have a chance to make a statement in front of a national audience, they fall flat.

Look no further than Washington’s lone appearance on Monday Night Football last season, when Philadelphia quarterback Mike Vick accounted for six touchdowns by himself in a 59-28 route at FedEx Field.

If that’s the only game people outside of this area have to go off of, then why on earth would they go out of their way to praise the Redskins?

Toss in the constant change at head coach/offensive and/or defensive coordinator/quarterback and the always “enjoyable” meddlesome owner shtick, and it’s no wonder many so-called experts picked the Redskins to win just two or three games in 2011.

Until this team can go out and prove the critics wrong, this is tired storyline we’re all stuck with. The good news is the players in the Redskins locker room appear to understand the situation.

“My first year we went 4-12,” said linebacker Brian Orakpo. “The next year we went 6-10. We should be viewed as a sorry team. Expectations should be very low for this team. We just have to handle adversity; handle what everyone thinks of us and just go out there and fight.”

For as bad as the Redskins have been during Orakpo’s two seasons in Washington, the franchise has been even worse during primetime games – especially on Monday nights.

Here’s a breakdown of just how pitiful the franchise has been in primetime games since 2000:

Just look at the last four Monday Night Football games involving the Redskins: four losses by a total score of 154-63, which results in an average score of 38-15.

Oh, by the way, all four losses came at FedEx Field and by double digits (with three coming at the hands of a divisional opponent). Not good times.

Of course, the team is somehow riding a two-game winning streak on the road on Monday nights, so maybe the key is just to get away from our nation’s capital.

While the overall record on Sunday nights isn’t terrible, the Redskins have lost four of their last five games on the national stage by a combined score of 89-57.

More specifically to this rivalry though, the Redskins and Cowboys have squared off in front of a national audience nine times since 2000.

Of course, the majority of those games involved players who are long gone. So maybe the roster is comprised of so many new faces that they haven’t been around long enough to know the burgundy and gold stink on primetime television.

And if you’re looking for reasons to believe, consider this: counting the playoffs, the Cowboys have lost seven of the last nine games quarterback Tony Romo has started.* So maybe that balances out Washington’s less-than-stellar record on Monday nights.

*Think about that for a second. Dallas is 2-7 in Romo’s last nine starts. Rex Grossman, who is viewed as a punchline rather than a legitimate starting quarterback, is 3-2 as the Redskins starter. Maybe if The Rex Cannon had been linked to Jessica Simpson rather than Steve Spurrier at some point in his career, people would be kinder to the nine-year pro.

Add in injuries to just about every player you’ve ever heard of in Dallas and this game seems winnable for the visiting team.

Regardless of who is in the lineup for the Cowboys, you can rest assured that Redskins head coach Mike Shanahan will do everything in his power to have his players ready come Monday.

“If you can’t get up for games like this, then you shouldn’t be in this profession,” Shanahan said. “From a coaching standpoint or a player’s perspective, Monday night, especially in Dallas, it’s just a great venue. This, to me, is why you’re in this game.”