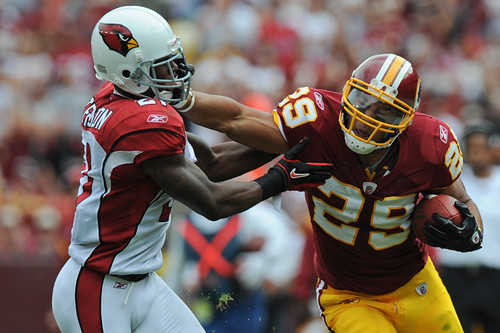 The Washington Redskins narrowly defeated the Arizona Cardinals 22-21 Sunday in a game that was far from perfect.

For the second straight week, the Redskins got off to a slow start at home. Instead of just trailing 7-0 after the first quarter though, Washington decided to spice things up and also commit two turnovers in the opening frame.

One week after Redskins quarterback Rex Grossman threw for 305 yards with two touchdowns and a sparkling 110.5 quarterback rating against the New York Giants, “Bad Rex” made a cameo.

The first two Redskins drives were a combined 19 plays for 112 yards, but neither put points on the board. The first drive ended with Grossman forcing an ill-advised pass into coverage and the second drive came to a halt when receiver Anthony Armstrong deflected a Grossman pass into the air and it was also intercepted.

Despite the fact that the Cardinals offense had the ball for exactly two minutes and six seconds in the first quarter, they held a 7-0 lead heading into the second quarter.

If you wanted to make the case that the Redskins were suffering from a hangover after last week’s emotional win over a divisional rival, I couldn’t really disagree.

If you argued that Washington was suffering a letdown game against an inferior opponent, I could see your point.

However you wanted to spin it, the Redskins were well on their way to giving away another winnable game thanks to mental lapses and self-inflicted wounds.

For the second week in a row, the Redskins were able to put together a drive when the game was on the line.

In the season opener, Washington was able to mount a five-play, 80-yard drive right before halftime to tie the game at 14-14 the very next drive after the Giants regained the lead. Momentum had shifted in favor of the visiting team and the Redskins offense answered the call.

Against Arizona, the Redskins faced an equally grim situation. After allowing a 73-yard bomb to receiver Larry Fitzgerald to give the Cardinals a 21-13 fourth-quarter lead, the Redskins offense stepped it up once again.

Grossman orchestrated a 13-play, 73-yard drive that was capped off by a fourth-down touchdown pass to wide out Santana Moss to cut the lead to 21-19.

Had the offense come out in either situation and gone three-and-out, Washington likely loses the game. But this team, unlike any in recent history, is able to move the ball in the most crucial moments of a game.

When the spotlight intensifies, this offense doesn’t wilt under the pressure of big-game situations. Say what you will about the guy, but the Redskins couldn’t finish drives when Donovan McNabb or Jason Campbell were calling the shots.

Under Grossman though, this offense is actually capable of something special. And that’s not something most ‘Skins fans thought would be possible so early in the 2011 season.

You wouldn’t have known it watching last year’s Redskins team, but head coach Mike Shanahan is a bit of a genius when it comes to the running game.

During his time in Denver, Shanahan was seemingly able to take any running back available and turn them into a 1,000-yard rusher.

The Cardinals game gave Redskins fans their first glimpse into how wonderful that experience can be when starter Tim Hightower rushed for 83 yards in the first half against his former team and then rookie Roy Helu Jr. caught fire in the second half.

Hightower finished the game with 20 carries for 96 yards while Helu chipped in 74 yards on 10 carries. With a potent one-two punch like that, it’s much tougher for a defense to tee off on Grossman in the passing game.

Washington had the 31st ranked ground game in the NFL one season ago, but this is clearly the dawn of a new day in the Redskins backfield.

It’s no wonder why last season’s starting running back, Ryan Torain, can’t even crack the lineup. The two guys ahead of him have done such a masterful job of seizing the opportunity, Torain is left to sit back and enjoy the show like the rest of us.

Besides the newfound rushing attack, Washington is also enjoying production from another unexpected avenue.

Since his arrival, Pro Bowler Chris Cooley has been the face of the franchise for the burgundy and gold. Well, his backup, tight end Fred Davis, is absolutely making the most out of his chances through two weeks – leading the Redskins air attack with 11 catches for 191 yards and a touchdown.

By my math, Davis has six catches of 20 yards or more, which is unusual for a tight end. But the fourth-year pro has been able to stretch the field as well as any speedy receiver so far this season, while Cooley has been limited to two catches for 21 yards.

It’ll be interesting to see how the coaching staff handles this situation moving forward – especially with Cooley clearly less than 100 percent.

Against the Cardinals, Shanahan had no problem turning to Helu in the second half because, as Hightower put it, his coach was “going with the hot hand.”

The more Davis does, the harder it is to justify limiting his time on the playing field. And considering he’s had 13 passes thrown his way and he’s caught 11 of them, Davis is absolutely cashing in any time Grossman looks his way.

How much longer can the Redskins get away with having a complete liability in the kicking game?

I mean, when third-year kicker Graham Gano isn’t missing chip shot field goals like he did against the Giants, he’s having field goal attempts blocked or he’s slicing his kickoffs out of bounds.

Much like the Redskins of yesterday, Gano is only good when there’s no pressure on him (10 for 10 in the preseason confirms that). but as soon as the team cut his competition, Gano reverted to the same old same old.

For his career, Gano has converted just 28 of 40 attempts (70 percent). He’s so erratic that the coaching staff had little choice to go for it in the fourth quarter when the team was faced with a 4th-and-3 from the 18-yard line.

Fortunately Grossman connected with Moss to pull the Redskins within two with enough time left in the game to complete the comeback, but it’s tough to envision Washington winning many of these nailbiters with such a wild card at such a vital position.

Until Gano can prove once and for all that he’s an asset, it’s going to feel like Russian Roulette every time he takes the field.

Finally, here’s a link to my favorite photos I was able to capture during the Redskins-Cardinals game.