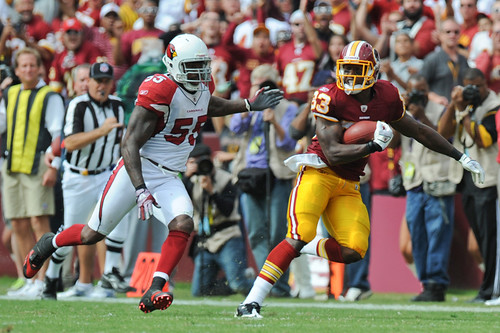 Judging by the preseason predictions made by so called “experts,” the Washington Redskins are off to start that few outside the beltway thought was possible.

The defense is once again capable of striking fear in opponents, quarterback Rex Grossman has silenced critics and return specialist Brandon Banks has fans on the edge of their seats every time he touches the football.

And yet, no Redskins player has gotten off to a better start than tight end Fred Davis.

Through two games, the 25-year-old has been the focal point of Washington’s passing attack – hauling in 11 catches for 191 yards and a touchdown.

There might have been a time when folks could lump Davis with fellow second-rounders Devin Thomas and Malcolm Kelly, but those days are long gone.

While those two are no longer collecting paychecks at Redskins Park, Davis has shown once and for all that he’s too good to remain on the sidelines.

With six catches for 86 yards and a touchdown, Davis was instrumental in helping the Redskins rally back from an eight-point deficit to defeat the Arizona Cardinals 22-21 Sunday.

After the game, I had the chance to catch up with the former USC standout and was pleased with what he had to say.

Would I be wrong to believe that these first two games seem to be you making a statement to the football-loving world that you have officially arrived?

“Oh yeah, and it ain’t gonna stop there, man,” Davis said. “It’s going to continue because there are still some things I could clean up and I still feel like I could have done a little bit more. I’ve just got to look at the film and get better every week. All that matters right now is getting that ‘W,’ and that’s what we got today.”

Looking at the numbers, you’ve got six catches of 20 yards or more through two games. It’s baffling because everything I’ve ever heard is that tight ends aren’t supposed to be able to stretch the field like that …

“That’s what they say to me. I’ve got guys out there on defense telling me to slow down,” he said. “They’re trying to hit me now on second-level releases. But I’m just getting started. The ball could be coming my way any time, so you’ve gotta make plays. I feel like I’ve just got to run fast, get out there and make plays.”

It was reported that you dropped something like 15 pounds during the offseason. Is it noticeable to you when you’re out there in the heat of the battle?

“Yeah, yeah,” Davis said. “Just in the way I play now, man. I definitely feel it as I’m playing and as I’m running routes and blocking. I’m a little lighter in the blocking area, but I can still move around with the guys and get a hold of someone for the running backs.”

As far as this offensive system goes, do you find it coming to you easier now? Is it second nature to you now that you’re in your second season in it?

“Honestly, I’m not even thinking at all,” he said. “If you’ve been in this offense two years and you’re thinking – you shouldn’t be here. Two years in this offense is just enough time, and it’s only going to get better as time goes on and we keep playing.”

You’ve been here long enough to know that Redskins teams in the past who turned the ball over twice early and got a field goal attempt blocked weren’t winning a game like this. What’s really going on around here now?

“Yup. With the old Redskins – even if this was us last year – I would have told you we’d lost,” Davis said. “But this is a different team now. We’ve got a different mentality now and we all believe. All of us are out there making plays – the receivers, the offensive line is blocking and Rex [Grossman] – everybody is doing what we’ve got to do. We’re not the same old Redskins.”

When did you first feel like something was really different this time around?

“Back in camp,” he said. “Everybody else might have been like ‘Yeah, you guys might win two lucky games’ or stuff like that, but to me, it just felt like in camp we told ourselves we ain’t gonna be the same old Redskins. We’ve been sticking to that. And if the defense lags on a series, then the offense has got to pick it up. If the offense messes up, then the defense has got to have our back. That’s the understanding we’ve got.”

You mentioned Rex Grossman earlier. What has he shown you since he was named the team’s starting quarterback?

“Rex has just been going out there and doing what he needs to do,” Davis said. “He’s being consistent and making plays. Even though there were a couple fluky bounces and interceptions – don’t look at that. Look at the fact that he’s standing tall in the pocket and getting the ball to everybody. He’s done a great job distributing it around.”

You and I have talked countless times since you came to town and you’ve always known you had the ability — you just needed the opportunity. Honestly, how good does this fast start feel?

“You know how it is in this league, man,” he said. “When you get an opportunity, you’ve just got to take it. Some guys might have the talent, but by the time they get the opportunity they get so frustrated and they don’t do anything with it. You’ve just got to stay calm and remain patient. Somebody told me that a while back and I finally realized it for myself. Now, this is just the best situation I could be in.”

Since the day he came to town, Pro Bowler Chris Cooley has been the face of the Redskins offense. Coaches, coordinators and quarterbacks have come and gone, but Cooley has remained productive.

With the 29-year-old still trying to get back to 100 percent after a knee injury, the bulk of the load has been put on Davis.

Much like in 2009, when Cooley was out of the lineup for all but seven games, Davis has shown he can handle the additional workload.

Once Cooley fully recovers, it’ll fall on the Washington coaching staff to find ways to best utilize the two talented tight ends as often as possible.

Considering nine different receivers have already caught a pass through two games, it’s a safe bet both will see plenty of playing time all season long.

If that’s the case, this will definitely be a banner year for Davis – even if the so called “experts” never saw it coming.