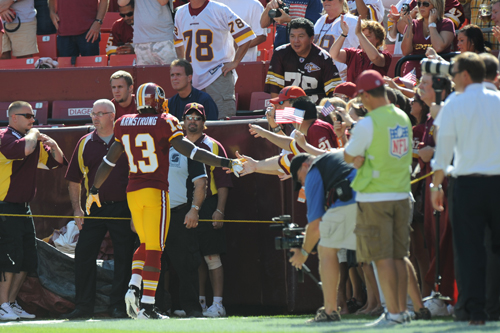 Fans of the Washington Redskins are still riding high after the team’s resounding 28-14 victory over the New York Giants in the season opener.

Not only did the Redskins defeat a Giants team that had dominated them over the last five years, but they did so in convincing fashion.

The defense, which ranked 31st in the NFL last season, took away New York’s ground game in the second half and then dialed up the pressure on Giants quarterback Eli Manning. The results were glorious – four sacks and an interception returned for a touchdown.

The offense, which has struggled to score points consistently for a decade or so, moved the ball well and Washington finished the game with a mind-numbing 28 points. Quarterback Rex Grossman threw for 300 yards for the third time in four starts and, for at least one week, managed to silence the critics who labeled him one of the worst starters in the NFL.

*Except for Graham Gano, who apparently isn’t capable of making anything more than an extra point during the regular season.

No matter which way you look at it, there’s plenty to like after Week 1. All the drama queens from a year ago are elsewhere and now the only thing that seems to matter to the guys in that locker room is winning football games.

With so many new faces on the roster – and let’s not forget three of the four Redskins touchdowns against the Giants were scored by people not on the roster last season – it really does appear to be the dawn of a new day in our nation’s capital.

But before everyone goes overboard anointing this one-win team before they actually accomplish anything truly noteworthy, I’ve got one simple request – let’s see them do it again this Sunday.

Do you realize that the Redskins have a chance to match last season’s home win total with a victory over the Arizona Cardinals this weekend?

Let me repeat that – Washington can win as many home games in the first two weeks of 2011 as they did in all of 2010.

It goes without saying that for the Redskins to actually become relevant once again they’re going to need to do better than 2-6 at FedEx Field.

That being said, winning Week 1 doesn’t automatically mean this year is different. It just means Washington is off to the usual hot start.

You see, the Redskins have won eight of their last 11 season openers, and yet, how many times have the Redskins made the playoffs in that span?

And do you know what those two seasons have in common? Washington started 2007 and 2005 by winning Week 1 and – as simple as it sounds – they won again in Week 2.

Think about last year. Washington starts the season off with a fortunate win over a divisional rival at home – this time, the Dallas Cowboys.

The following week, the Redskins jump out to a huge lead against the Houston Texans, but snatch defeat from the jaws of victory because someone thought it was a good idea to let safety Reed Doughty try and cover Texans receiver Andre Johnson.

Houston rallied, after trailing by 17 points in the second half, to win 30-27 in overtime and the Redskins were left searching for answers after another heartbreaking loss to a mediocre opponent.

Anyone and everyone associated with the Redskins will tell you that there is a new mindset in that locker room. You’ve heard plenty this week about players opting to show up for work rather than enjoying “Victory Monday” off, but there’s only one way for this team to show they’re different – they’ve got to defeat the Cardinals.

Because the Redskins team I’ve known and loved for much of my life would absolutely go out after such an uplifting win and suffer a huge letdown. Rarely is momentum a factor in Washington, because the Redskins have so much trouble winning even two games in a row.

The Redskins have definitely been known to lull fans into a false sense of security by looking great one week and then losing in painstaking fashion the following game. And honestly, the Redskins are a team that performs best with little to no expectations placed upon them.

After defeating the Giants in a total team effort, all eyes are on the Redskins once again and we’re about to find out what these guys are truly made of.

In head coach Mike Shanahan’s first season in Washington, the Redskins won back-to-back games just once. Obviously that has to change if the Redskins are ever going to be allowed back at the grown-up’s table.

And most importantly, the Redskins need to find a way to win ballgames at FedEx Field. Over the last decade, the burgundy and gold is just 38-42 at home. That’s not good enough.

So while on the surface starting the season 2-0 doesn’t seem like that big of a deal, it’s huge if the Redskins really have improved as much as the players believe they have.

The Redskins, for at least a decade or so, have never fared well when any sort of expectations are placed on them. Well, like it or not, Washington is favored and expected to win against Arizona.

The Cardinals allowed a rookie-record 422 passing yards by Panther quarterback Cam Newton in his debut. Yes, the same Newton who completed just 40 percent of his passes in the preseason.

So Arizona’s defense – and their secondary in particular – isn’t exactly taking the world by storm. Their offense is capable of putting points on the board, but with Beanie Wells and not much else in the run game, it’s not crazy to think defensive coordinator Jim Haslett can make the Cardinals one dimensional in the same way he did against the Giants last week.

This might be the team’s best chance this season to prove this is truly the dawn of a new day in Washington. Every other Redskins team in recent history goes out this Sunday and lays an egg against an opponent they’re expected to beat.

Is this year any different? We’re about to find out.