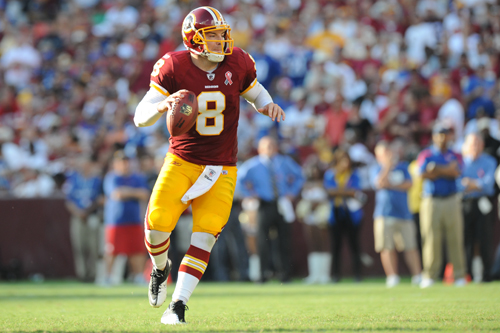 Something stood out to me in the moments after the Washington Redskins defeated the New York Giants 28-14 Sunday.

When Redskins quarterback Rex Grossman was made available to the postgame media, he took to the podium still dressed in his uniform.

Most people probably didn’t give it a second thought, but it stood out to me because it’s just not something I’ve seen very often in my seven seasons covering this team.

You can chalk it up to a player who isn’t overly concerned with his outward appearance or what others think – which wouldn’t surprise me because of Grossman’s non-reaction to offseason whispers about him showing up to training camp overweight.

Or you can say that Grossman simply wanted to get the media session over with as quickly as possible, so he didn’t even bother to shower and change until after this obligation was completed.

Either way, it was a stark contrast to last year’s starting quarterback, Donovan McNabb, who rarely stepped in front of a television camera without sporting a tailor-made suit.

But here’s the thing – I happened to walk past Grossman after the game and after he was done with the press conference. The nine-year pro had finally gotten out of his uniform and was gingerly working his way towards the training room to seek treatment after a punishing game against an aggressive defense.

The Giants definitely tried their best to take away Washington’s running game in hopes of making the Redskins offense one dimensional,* but New York’s plans backfired.

*Which is the polite way of saying they wanted the ball in the hands of Grossman.

Because even with a less-than-stellar day from the Redskins ground game and an uneven performance from Washington’s offensive line, Grossman was able to do the heavy lifting necessary to bring him the victory.

For all the talk outside of our nation’s capital about how Grossman is destined for mediocrity, he’s now 21-14 as a starter for his career and, most importantly to ‘Skins fans, he’s now thrown for 300 yards in three of his four starts in Washington.

Not bad for a player who reached the 300-yard mark only once before joining the burgundy and gold.

“I thought Rex played an excellent game,” said head coach Mike Shanahan. “There was a lot of pressure up front. They were a very talented football team. It’s extremely hard to get big plays in the passing game against a defensive front that puts lots of pressure on the quarterback.”

While Grossman’s name is used mostly as a punchline elsewhere, his head coach couldn’t care less about what others think when it comes to his starting quarterback.

“I really don’t worry about what somebody has done in the past, just what he’s done here,” Shanahan said. “He’s been pretty consistent here since he’s been here with the way he works in practice, the way he goes about his business. All I can do is judge Rex or any other player about what they have done since they’ve been with the Washington Redskins. That’s what we’re looking at with all of the different positions. Guys have to take advantage of their opportunity on game day and show us what they can do.”

Judging Grossman based solely on his Week 1 performance, it’s tough to argue with the two-time Super Bowl winning coach.

Two of Grossman’s throws in particular stood out to me against New York. Trailing the Giants 14-7 just before halftime, Grossman stepped calmly onto the field and orchestrated the two-minute drill like nothing seen in Washington in ages.

Grossman just dropped back and connected with receiver Jabar Gaffney on a beautiful 39-yard completion to move his team into ideal field position with plenty of time left on the clock.

Two plays later, Grossman threw the best fade route I’ve seen from a Washington quarterback since Brad Johnson suited up in the burgundy and gold.

The touch pass thrown by The Rex Cannon to wideout Anthony Armstrong that tied the game at 14-14 with 37 seconds left in the half is a pass that McNabb never made during his time in D.C.

It’s a throw Jason Campbell couldn’t connect on either. And forget about Mark Brunell. To even attempt that pass, he’d have to throw a ball past the line of scrimmage. But the least heralded guy of the bunch didn’t even give it a second thought.

London Fletcher credited that drive by the Redskins offense as the turning point in the game. After giving up a touchdown to the Giants moments earlier, it wouldn’t have surprised anyone at FedEx Field to see Washington go three-and-out (or worse) on the ensuing series. But Grossman had other plans and the Redskins were able to take momentum into the second half.

Two minutes into the third quarter, the defense forced Giants quarterback Eli Manning into a turnover and the Redskins never looked back.

“A lot of people want to focus on the bad days Grossman had in Chicago, but it’s like people forgot he took that team to the Super Bowl,” said fullback Darrel Young. “Critics want to focus in on the bad situations because that’s the way ESPN analysts make their money. But Grossman is a guy we know we can win with. Whether he throws a touchdown pass or makes a mistake, he carries himself the same way. He comes into the huddle with the utmost confidence and that carries over to the rest of the team.”

Young specifically mentioned a December game last season in Dallas, when the Redskins trailed the Cowboys 27-7 in the second half. Grossman decided enough was enough and inspired the rest of the offense to forget about the scoreboard and just start playing the game they love.

Next thing you know, the game is tied up at 30-30 thanks to four touchdown passes* by Sexy Rexy, and the Redskins were suddenly in a position to win the game. Yes, Dallas ultimately prevailed, but Grossman showed the rest of the guys in that locker room what he’s made of.

*This shall forever be known as Grossman’s “Al Bundy game.”

Grossman isn’t ever going to be confused with Tom Brady, Drew Brees or Aaron Rodgers. And yes, he’s still going to have his good days and his not-so-good days. But the simple fact is – Grossman is the best man for the job here in Washington in 2011.

Now in his third-consecutive season under offensive coordinator Kyle Shanahan, Grossman knows this offense well enough to run it in his sleep. He doesn’t need to worry about wearing an arm band or any other nonsense like that. He just goes out there and executes what his coaches ask of him.

He might not be the long-term solution in Washington – where the Redskins have searched for a franchise quarterback for something like 20 years – but he’s a guy that’s more than capable of managing the game well enough to put his team in a position to win on Sunday.

“I feel like it’s been years since we’ve had that kind of fun out there,” said receiver Santana Moss. “I sensed this during training camp, during preseason. We have a different kind of swagger in here. Everybody is confident in here. Everybody in here is about the team. We don’t have any selfish guys and that’s what it’s about. We’re going to help each other win.”

Moss said one more thing that caught my attention after Sunday’s win.

“Right now, I feel like we have one of the best teams the Redskins have had recently,” Moss said.

He didn’t say the Redskins had the most talented players. No, Moss said he feels like they have one of the best teams he’s been a part of in Washington.

The Redskins don’t need big names on the roster anymore. Those days are gone. This time around, they’re turning to guys like Grossman, who might not be all that glamorous, but they can get the job done when it matters.