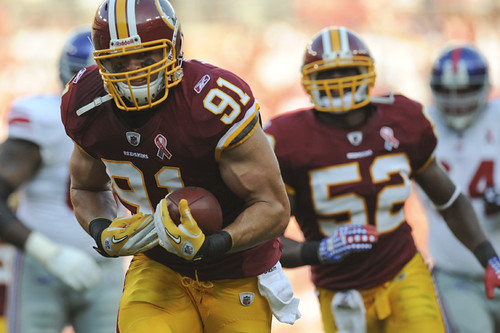 1. “Against the Wind” by Bob Seger

With all eyes turned to our nation’s capital, the Washington Redskins did the unthinkable by soundly defeating the New York Giants 28-14 in a statement game for the home team.

The Redskins had lost nine of their last 10 games against the Giants, with each game seemingly coming down to the same issues – a slow start, a lack of a running game and turnovers.

If Washington was finally going to emerge victorious against their divisional foe, these three areas would seem to be vital.

So what happened? The Redskins, once again, stumbled out of the gate – failing to score against New York in the first quarter for the seventh straight game.

When Giants quarterback Eli Manning scored his fourth rushing touchdown of his career just over five minutes into the game, it appeared that Washington was settling in for another disappointing loss.

But things have changed with the burgundy and gold. No longer are ‘Skins fans forced to cheer for a bunch of overpriced malcontents who are happy to cash in their checks while losing each and every Sunday.

This team might not be star studded, but they’re players who specifically fit the system head coach Mike Shanahan wants to run. And best of all, these guys have heart and actually care about putting forth actual effort.

Led by quarterback Rex Grossman, the Redskins were able to put together three substantial drives in the first half.

The first was a 10-play, 61-yard drive that ended with a missed field goal by Graham Gano.*

*After going 10 for 10 in the preseason, Gano missed his first attempt of the regular season. Of course he did. Too bad Shayne Graham isn’t still a free agent. The team could sign him once again to scare Gano into being good again.

The second drive was an 11-play, 66-yarder that was capped off by running back Tim Hightower’s one-yard touchdown run.

And the third drive was a five-play, 80-yard drive right before the half that ended with receiver Anthony Armstrong hauling in a six-yard reception to tie the game at 14-14 with 37 seconds left in the half.

That final drive was singled out by linebacker London Fletcher as the turning point in the game because it gave the Redskins momentum going into the second half even though the team was far from perfect through the first two quarters.

The running game still was struggling to get things rolling and the offensive line wasn’t exactly doing their best impression of “The Hogs,” but Grossman stepped up when his team needed him most and was the difference maker on this Sunday.

Consider this – Grossman has thrown for 300 yards four times in his nine-year career. Three of those efforts have come in his five games with Washington.

A few more days like this and the good folks in Chicago, Houston and anywhere else where Grossman’s name has been dragged through the mud might have to come up with a new punching bag.

Because, as center Will Montgomery put it, the Grossman leading the Redskins offense these days isn’t some talent less hack. He’s a “smooth operator” who knows better than anyone how to run Kyle Shanahan’s offense efficiently.

Oh, and just for the record, a certain Minnesota Vikings quarterback threw for a grand total of 39 yards on Sunday. Just thought I’d throw that out there.

After halftime, something flipped for the Redskins defense.

All of the sudden, the Giants ground game vanished. New York running back Brandon Jacobs, who is known for running over defenders dumb enough to get in his way, was stopped on a 4th-and-1 attempt.

Once the ground game was taken away from the Giants, the game was put in the hands of Manning – which is exactly what you want to hear if you’re a Redskins fan.

With no one to help carry the load, Manning looked completely uncomfortable in the pocket. He was sacked four times, pressured countless others and the Giants converted only one of 10 third downs.

It felt like it was only a matter of time before the Redskins defense made a play to take control of this tightly-contest game, and that’s exactly what happened when rookie linebacker Ryan Kerrigan deflected a Manning pass, caught it and took it to the house for the game-winning score.

Moments earlier, tackle Trent Williams got beat cleanly by Giants defensive end Jason Pierre-Paul and hit Grossman from behind, causing The Rex Cannon to fumble the ball. Hightower made a tuchdown-saving tackle on linebacker Michael Boley, but New York still had great field position and plenty of time to tie the game.

But the defense stepped up when needed most and then Orakpo made Washington’s most memorable block since Troy Vincent shut down Dallas back in 2006.

The biggest reason Grossman was able to have such a memorable evening was the inspired play of tight end Fred Davis, who led the Redskins offense with 105 receiving yards on five catches.

It wasn’t just the numbers – although this was Freddie Delight’s first ever 100-yard performance. It was also the high degree of difficulty needed to attain those numbers.

Think back to the preseason game against Pittsburgh when Grossman threw a pass to Davis in traffic and a Steelers defender nearly decapitated the tight end.

Well, history nearly repeated itself against the Giants, but this time Davis took the punishing hit and held onto the football. He made his mark in a physical game – taking the best New York’s defense had to offer and never looked phased.

Feel free to call Devin Thomas or Malcolm Kelly a bust, but don’t be foolish enough to lump Davis in with them. Games like this show just how talented Davis is when he’s involved in the offense.

5. “Ain’t No Rest For The Wicked” by Cage the Elephant

There’s something different about this team. For starters, three of the four touchdowns scored against the Giants came courtesy of players who weren’t here a year ago.

Second – and most importantly – these players aren’t willing to settle.

Fullback Darrel Young put it best when explaining what impressed him most about the team after their big win. The ‘Skins could have easily used this win as an excuse to thump their chests and get overly cocky, but that’s not gonna happen with this squad. They’ve got their eye on a bigger prize.

“We always get Victory Mondays – after we win, we get off on Mondays,” Young said. “The guys said, ‘Not yet. We don’t want that yet.’ That’s the best thing I heard today. Regardless of the win, we’ve got guys that wanna [put in the extra work].”

Young explained that veterans like DeAngelo Hall and London Fletcher were quick to push to skip the day off in favor of having practice Monday. Even after a win the players know there’s plenty of room for improvement.

That, more than anything else, should be the highlight of the weekend for Redskins fans.

Finally, here’s a link to my favorite photos I was able to capture during the Redskins-Giants game.