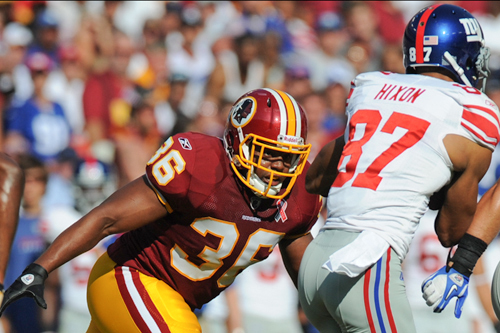 Forgive Darrel Young if he was a little caught up in the moment as he took the field for the Washington Redskins against the New York Giants Sunday.

This offseason, Young was named the team’s starting fullback over 12-year-veteran Mike Sellers, so the season opener was his first chance to show the world what he’s got.

There was also the significance of the 10th anniversary of Sept. 11, 2001, which wasn’t lost on the native New Yorker and, if that’s not enough, Young’s brother – Sgt. 1st Class David Young – was back from an Afghanistan deployment and in attendance at FedEx Field.

That meant the older Young was watching his baby brother play a regular season game for the first time in person, rather than being forced to watch each game in a tent halfway around the world.

“It was just an honor to be able to play in a game on a national stage like that, but at the same time, it was a very emotional day for me,” Young said. “My brother was in the stands and thinking back to 9/11 – being from New York and being about 45 minutes away from where everything happened. All of that was on my mind.

“And then, seeing all of the fans in attendance and the video tributes during the game – especially the Soldiers on the JumboTron over in Afghanistan,” he continued. “I obviously have strong feelings for those people because I know what they go through. I don’t like it, but I understand that someone has to fight for our country. It definitely hits me more than the average person.”

While Young appreciated the patriotic sentiment shown throughout the NFL Week 1, he’s hopeful that those who lost their lives in the World Trade Center tragedy are honored in a more fitting way.

“Being from New York and seeing how many people were affected, I mean, we’re still trying to rebuild,” Young said. “I’ve heard talk about them possibly building the towers back, but I’d really like to see them turn that site into something like Arlington National Cemetery. Make it a symbol of something meaningful to this country and honor the people who gave their lives that day.”

And where was Young on that fateful day 10 years ago?

“I was sitting in social studies class in my first year of high school,” he said. “It was probably my second week of school and the teacher came in and told us the towers had been hit. None of us could really figure out what was going on, and then next thing I know my mom was dismissed from work and came to take me home. I still didn’t know what was going on until I got home and saw the news.

My first thought was my brother and knowing he could be affected by everything,” Young continued. “I got to talk to him for 10 minutes and he basically let me know he was waiting to find out if he was going to be shipped out overnight. He said he didn’t even know when we’d be able to talk again and that he loved me. That’s what I remember most about 9/11.”

That’s some heavy stuff for a 14-year-old to deal with — wondering when will be the next time you’re able to talk to your older brother.

“I just know that’s what my brother wants to do, so I support him to the fullest,” he said. “I don’t agree with guys being over there and getting killed, but these are people who choose to fight for this country. I’m biased because of what my brother and his wife go through – leaving their family to go over there and protect us for six months or a year at a time, but I support all of them.”

With all of that in mind, Young took the field against a divisional rival in a nationally televised game for his first-career start.

“It’s a dream come true,” Young said. “Just to know that my older brother – the guy who has supported me through everything – can be there to watch me do my trade. I look at him and his situation where he’s fighting for his life every day he’s over there and I’m fighting to play football every day. He’s fighting for our country and I have so much respect for him and what he does, so it was special to have him there with me.”

It didn’t matter that Young was limited to just 13 plays on offense. He was ready and willing to do whatever his coaches asked of him and eager to gain more experience so he can continue to improve his game.

On one particular punt, Young locked in on Giants receiver Domenik Hixon and launched himself at the return specialist. Young didn’t get a clean shot on Hixon and he was able to pick up a few extra yards on the play.

“Those plays are the difference between being the best coverage team in the league and being the last,” he said. “Those extra nine yards I gave up are too important, and I feel like you work so hard to run down the field and fight through blocks that you’ve got to make that play. I’m glad we got him down at the end of the day, but I wanted to be the one to make that tackle.”

A bit later in the game, the Redskins kicked off to a familiar face – Giants receiver Devin Thomas. Kicker Graham Gano booted the ball to the back of the end zone and although Thomas thought about attempting to run the ball out for a moment, he eventually opted to play it safe and take a knee.

“I couldn’t even tell you how badly I wanted him to run it out,” Young said. “I was really trying to be the first one down the field and was hoping he’d bring it out. He had run it out all preseason, so we were expecting him to bring it out, so I was hurt when he took a knee.

“After he called us the Deadskins all week and talking about how Coach [Mike] Shanahan didn’t give him a chance, I feel like he took a shot at us,” he said. “I took that personally when I heard him call us the Deadskins.”

For all the talk about rivalries only existing between fans, Young couldn’t disagree more.

“There’s definitely a rivalry. Every time the New York Giants take on the Redskins, you can throw the records out the door,” he said. “In these divisional games, the emotions that we have behind those games is something else and the atmosphere is completely different.

“Guys like London Fletcher and Mike Sellers have been around a long time,” Young continued. “Before the game they were making sure everyone knew we had only beaten the Giants once in the last 10 times we’ve played them. So yeah, it feels good to beat them.”

The fact that, at the end of the day, Young was able to savor the moment and enjoy a victory on such a meaningful day is something that he admits he’ll never forget. And with his first career start in the books, he can’t wait until his next chance to take the field.

While there are definitely more important things going on around the world than a football game, he can’t help but think of how special it’s going to be to once again do what he loves with his biggest supporter cheering him on in the stands.