redskins versus giants: by the numbers 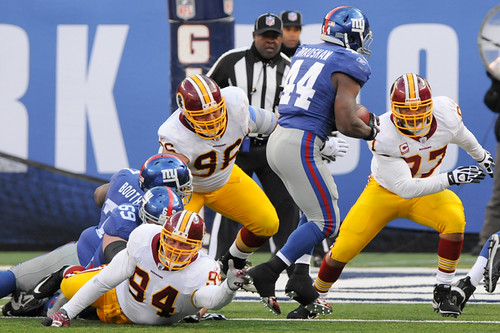 The New York Giants have been so dominant over the Washington Redskins in recent history that the burgundy and gold faithful has had to resort to moral victories.

You might remember that the Redskins lost 17-14 to the Giants in the 2010 season finale.

You might also remember that in the closing minutes of that game, the Redskins fans at FedEx Field did more than a little bit of celebrating once it was announced the Green Bay Packers beat the Chicago Bears 10-3 to make the playoffs and ensure the Giants missed out on the postseason.

That’s when ‘Skins fans erupted in cheers and began taunting the Giants and their fans in attendance. This was not lost on the players in the opposing locker room that day.

“Their fans were all cheering and whatnot,” said Giants defensive tackle Barry Cofield. “That shows you the state of their team, that they have to cheer about us failing. That’s when you have no success; those are the kind of things that excite you.”

Because the Giants have won nine of the last 10 games against Washington, the hometown crowd hasn’t really had much to cheer about when these two teams get together.

So basically, Redskins fans have to settle for cheering against the rest of the NFC East – especially since the rest of the division has been far more likely to be involved in meaningful games.

With the Giants dominating the Redskins for so long, I decided to dive into the numbers to see where things continue to go wrong.

For starters, New York has outscored Washington 242-134 over this 10-game span, which obviously works out to an average score of 24-13. Considering the problems the Redskins have had finishing drives in recent history, that’s not completely surprising.

But the one thing that really stands out in the box score is how the Giants have been able to jump out the gate quickly, build a lead and then coast to a relatively easy victory.

In fact, the Giants have outscored the Redskins 47-0 in the first quarter in their last six games.

Let me repeat that – the Giants have trampled the Redskins by a score of 47-0 in the opening quarter since 2008.

That suggests an apparent lack of preparation in the coaching department, which makes sense when you consider how stable one franchise is while the other seems to have a new game plan every time these two teams square off.

For the purposes of this exercise, we’re breaking down Redskins-Giants games since 2006. During that timeframe, New York has had one head coach and one starting quarterback: Tom Coughlin and Eli Manning.*

The same cannot be said about the Redskins, who have trotted out Joe Gibbs, Jim Zorn and Mike Shanahan at coach and Mark Brunell, Jason Campbell, Todd Collins, Donovan McNabb and Rex Grossman at quarterback against the Giants over the last five seasons.

It’s kind of tough to develop any kind of stability and continuity with that many key pieces in constant flux.

*Technically, Giants backup David Carr did play against the Redskins in 2009, but he only played in the final minutes of the blowout because New York was cruising to a 45-12 victory.

In addition to having the same coach and quarterback throughout, the Giants have also had the same basic game plan – create turnovers with an aggressive defense and utilize the running game to wear down the opposition.

None of this is earth shattering and anyone who plays the Giants knows this is their preferred game plan, but the Redskins simply haven’t been able to stop them even though they know what’s coming.

On the subject of the ground game, the Giants ran the ball against Washington 324 times, compared to just 227 carries by the Redskins. Without even looking at the number of rushing yards each team accumulated (New York has averaged 140 yards per game), you can see how much more committed New York has been to this phase of the game.

In all nine of their wins over Washington, the Giants carried the ball at least 30 times. Oh by the way, the Redskins handed off the football 35 times in their lone victory over New York. Coincidence? I think not.

So if you’re hoping to see Shanahan and friends reverse this trend this Sunday, it’s going to start with a healthy dose of running back Tim Hightower.

It’ll also require Grossman and the rest of the offense to be more protective of the football. Everyone knows the more careless a team is in the turnover department, the tougher it is for them to win.

Considering Manning’s reputation for temporary lapses in judgment, I was surprised to see that number was so low.

Look at it this way, over the last two seasons, Manning has thrown for 8,032 yards with 58 touchdown passes and 53 turnovers. Sure he’s going to rack up passing yards and touchdowns, but he’s still turning the football over at an alarmingly high rate.*

*Against teams other than the Redskins.

But even if Manning began turning the ball over against Washington as frequently as he does against the rest of the league, the Redskins arguably won’t be in a position to take advantage of the situation.

That’s because Grossman is equally careless with the football.

Manning has a thousand more passing yards and 18 more touchdown passes in nine less games, while the turnovers are basically the same. Oh, and Manning hasn’t had to bounce around from Chicago to Houston to Washington, so once again stability and continuity come into play.

If the Redskins are going to start off the 2011 season with a win, Grossman is going to have to do a better job of limiting turnovers.

That’s not going to cut it this Sunday.

If they get down early and are forced to abandon the rushing attack so that Grossman can drop back 40 or so times, it’s a safe bet that the Giants will once again leave FedEx Field victorious.

But if the Redskins can get off to a quick start, establish the running game early and eliminate the mental mistakes, this could be the year Washington finally gets back on track against the injury-riddled Giants.

If that happens, then Redskins fans might finally have something to cheer for other than the out-of-town scoreboard.