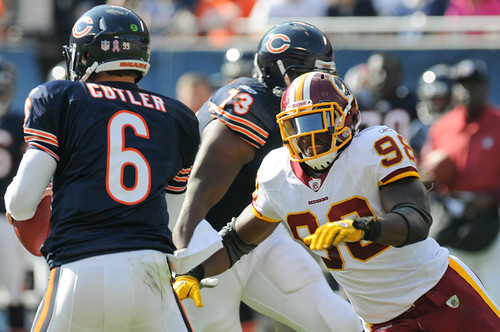 The fact is, this is now my seventh season as a credentialed photographer. Each and every Sunday, I travel to wherever the Washington Redskins are in hopes of getting as close to the action as possible.*

*Without getting steamrolled in the process.

In years past, I would take a couple hundred of my photos, shrink them down to a reasonable size, post them online and forget about them.

But the truth is, even I wasn’t ever going to go through 300 photos of a heartbreaking loss to the Tampa Bay Buccaneers.* And they were my photos.

*That being said, this photo from that heartbreaking game is awesome.

During the NFL lockout I finally got motivated enough to begin reviewing every single photo I’ve ever taken on an NFL sideline in search of my best shots from each and every game.

This time around I’m not posting hundreds upon hundreds of unedited photos. Instead, each week I’ll only post the cream of the crop — my five to 10 best shots from that particular game.

As you might imagine, this is a painstakingly slow process — starting with roughly 1,200 taken each game and selecting the top 10. Well, it’s taken a long, long time, but I’ve finally posted everything from the 2010 season and I’ll continue to work my way backwards through the rest of my photo archives.

And the new and improved galleries were worth the trouble. Redskins fans can not only check out a set for each game, but also search for photos by a player’s name.

For example, if you’re looking for photos of Brian Orakpo (like the one of him licking his lips as he’s about to drill an unsuspecting quarterback at the top of this page), he’s only a click away. If you’d rather see a photo of Albert Haynesworth trying to decapitate a man, he’s easy to find as well.

If you want to re-live the good old days of Carlos Rogers dropping easy interceptions, Santana Moss flying through the air or Chris Cooley goofing off, I’ve got you covered.

You can even see Mike Shanahan having what appears to be an aneurysm, Brandon Banks electrifying the crowd in the return game or London Fletcher propelling himself in the air to make a goal-line stand against Dallas. It’s all there.

So consider this my gift to you, Redskins fans. If nothing else, it’s a small way I can share my experiences covering the burgundy and gold with the rest of the class. And best of all, it’ll ensure that ‘Skins fans never forget the Joey Galloway era.