barry cofield breaks down the giants 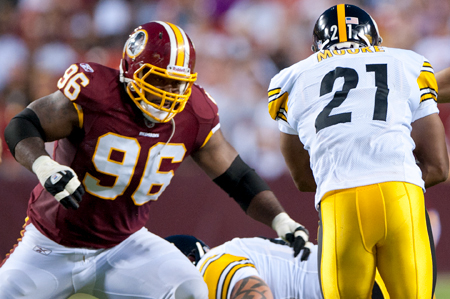 Like it or not, the Washington Redskins have been the definition of mediocrity over the last decade — going just 68-92.

And yet, even though Washington is 24 games under .500 during that time frame, they’ve somehow managed to emerge victorious in seven of 10 season openers during that span.

Conversely, the Redskins have lost nine of their last 10 games against the New York Giants, with their lone victory coming in 2007 as backup Todd Collins improbably lifted the burgundy and gold to a 22-10 win at the Meadowlands during the team’s last playoff run.

I don’t want to get anyone too excited, but it should be noted that the last two seasons the Redskins won a game over the Giants were 2007 and 2005. What do those two seasons have in common?

They also represent the team’s last two trips to the postseason. So basically, if Washington can win one of their two games against the Giants this year, it’s a lock that the Redskins will be playoff bound* once again.

Defensive tackle Barry Cofield has a unique perspective on the Redskins-Giants rivalry. Since his rookie season in 2006, Cofield was in the lineup for all nine New York victories over Washington.

With that in mind, I caught up with Cofield to gather his thoughts on playing against the team that drafted him out of Northwestern and why he thinks the Giants have been so dominant over the Redskins recently.

I’ve got a random question for you – how does a veteran player such as yourself pass the time on the sidelines during the fourth and final preseason game when you know going into it that you won’t set foot on the field?

“I’m just out there enjoying the game,” Cofield said. “I mean, it was a great game to watch. Luckily it was a very dramatic and exciting game, so they gave me something to watch. Leading up to the game though, since you know you’re not going to play, you know you can get a head start on the next game. Other than that, you just root for your teammates – the guy you’ve been putting in time with during training camp and everything. It was a great chance to see them shine.”

Since you brought it up, I guess I’ll ask a follow-up question – who do you guys play Week 1?

This is my seventh season covering the Redskins, and seemingly every time the Giants come to town they take our proverbial lunch money. What do you guys have to do to ensure that the hometown team emerges victorious?

“We’ve got to do a lot of the things we did in the preseason,” Cofield said. “The offense needs to continue to do what they’ve been doing – running the ball effectively and don’t turn the ball over. That’s something the Giants defense thrives on is creating turnovers. Defensively, we’ve just got to continue to grow under coach [Jim] Haslett. With the talent and scheme we have, I think we can contain their offense. I like our odds.”

The Redskins finished 31st in the NFL in defense in 2010. That’s not very good. What we’ve seen from the revamped front seven so far though has been pretty encouraging. Do ‘Skins fans have a legitimate reason to be excited about what this team is capable of up front?

“There’s a lot of new faces, and the holdovers we’ve got are guys like London Fletcher, Rocky McIntosh, Brian Orakpo and Adam Carriker,” he said. “Those guys are the cornerstones of this defense. The rest of us are just trying to fit in and help out wherever we can. I think we’re off to a great start, but we’ve got to continue to grow because there’s still a long way to go. You know, it’s not about where you start, it’s where you finish. So we want to be playing good football on Sept. 11th and continue to get better throughout the season.”

With the abbreviated offseason, thanks to the lockout nonsense, do you worry that you guys haven’t had enough time to gel? Are you comfortable with where you guys are heading into the regular season?

“I feel like we’ve gelled enough – I’ll say enough,” Cofield said. “We’re not where we want to be once we get to the finish line, but we’ve gotten far enough. For now, I think coach Haslett will keep the scheme simple enough so that we can succeed. But we’re on the same level as the rest of the league because every other team had a truncated offseason as well.”

One of the staples of Giants football is the potent ground game. They love to give the football to their running backs and pound the ball down the opposition’s throat. As the guy tasked with plugging the middle of the defensive line, that means they’re coming right at you, right?

“Yep, and I’m excited,” he said. “I relish the opportunity. It’s going to be a great chance to show the fans here in Washington what they signed up for and why they brought me here. Hopefully I can do that because if you can stop the running game, you’re gonna beat most teams in this league. Hopefully we can slow down their running game and then get after Eli.”

The “Eli” that Cofield referred to was, of course, Giants quarterback Eli Manning – a player who turned the ball over a mind-numbing 30 times last season (25 interceptions and five fumbles).

In fact, Manning has 58 touchdowns and 53 turnovers over the last two seasons, meaning he’s a high-risk, high-reward player. If the Redskins can do an effective job of stopping the New York ground game like Cofield says, they’ll definitely increase the chances of Manning coughing up the football.

And if that happens, then there’s a pretty good chance the Redskins can finally begin to turn the tide against the Giants and start the season off on a high note once again.