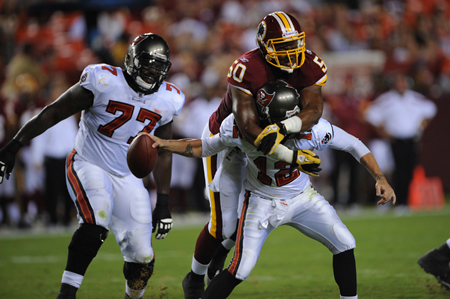 There’s never a dull moment when the Washington Redskins take on the Tampa Bay Buccaneers.

Off the top of my head, I can recall three memorable match-ups between these two franchises: the return of Hall of Fame head coach Joe Gibbs,* the Mike Alstott elbow game and the playoff win where safety Sean Taylor returned a fumble for a touchdown and then was later ejected for spitting in the face of running back Michael Pittman.

*You might recall running back Clinton Portis taking his first carry as a member of the Redskins 64 yards for a thrilling touchdown. That was this same game against Tampa.

That’s without even mentioning the previous playoff match-up between these two teams way back in 2000 that ended in heartbreaking fashion for the burgundy and gold. So yeah, even a meaningless preseason game takes on a bigger feeling when the ‘Skins and Bucs square off.

And you know what?

This game lived up to the heightened expectations as the Redskins backups rallied to defeat Tampa’s reserves 29-24, thanks to a 41-yard bomb from quarterback Kellen Clemens to receiver Donte Stallworth with just over a minute remaining to play in the game.

2. “Ain’t No Other Man” by Christina Aguilera^

For the second-consecutive season, head coach Mike Shanahan wisely opted to rest the bulk of his starters in the preseason finale.

While I’ve been critical of other decisions made by Shanahan (like dragging Donovan McNabb’s name through the mud just to prove a point or dragging his feet in naming a starting quarterback this season), I’ve got nothing against being overly cautious with your starters in the preseason.

After losing rookie defensive lineman Jarvis Jenkins for the year due to an injury against the Baltimore Ravens, Shanahan could have forfeited the final two preseason games as far as I was concerned. That’s how much promise Jenkins appeared to have and how much I hate seeing players lost for the year in meaningless exhibition games.

So while players such as running back Tim Hightower and receiver Santana Moss were given the night off, the Shanahan clan wanted to give quarterback John Beck one final opportunity to claim his place among the starters.

To ensure Beck made it out in one piece, Shanahan even kept his starting offensive line in the lineup as well. All Beck needed to do was pad his preseason stats against a bunch of guys only days away from bagging groceries in Tampa and the job was his.

There’s just one problem with the plan – Beck failed to deliver. The “chosen one” looked downright mediocre against the Buccaneers backups, completing 10 of 21 passes for 108 yards with an interception and a QB rating of 43.4.

Normally, it’s tough for a guy to stand out on a night he doesn’t even take the field. But thanks to the lackluster effort by Beck, Rex Grossman left FedEx Field smelling like roses Thursday night.

While Beck failed to deliver in his last chance to impress, thankfully, the same could not be said for some of his teammates. Two linebackers in particular – Rob Jackson and Markus White – were the stars against Tampa Bay.

Jackson got things rolling in the final two minutes of the first quarter by crunching Buccaneers quarterback Rudy Carpenter from behind – jarring the football loose, which White was then able to scoop up and return 37 yards to the 2-yard line.

Of course, Beck nearly nullified the turnover on the very next play when he fumbled the snap, but enough about him. I’m going to choose to focus on players who made an impact.

The Redskins eventually scored a touchdown thanks to the turnover and set the tone for the evening. White also managed to pick up a sack of his own in the fourth quarter and finished the game with five tackles, a sack, two hurries and a fumble recovery.

Not bad for a seventh-round pick who was battling for a roster spot.

The Redskins struck again three minutes into the second quarter when return specialist Brandon Banks took a punt 95 yards for a touchdown that put Washington up 14-0.

Of course, because Banks is his own worst enemy, he nearly did the impossible and screwed up the touchdown even though no defenders were in sight.

Banks flipped the football out of his hand as he crossed the goal line and it took an official review to confirm that the second-year player actually had possession of the ball long enough to get credit for the score.

Chalk it up as another brilliant decision by the one player on this current roster who seemed to keep his coaches up late at night. Hey, at least this one didn’t result in a trip to the emergency room. That’s got to be considered progress for Banks.

A lot of other stuff happened during the course of an especially long preseason game, but two plays stood out in the end.

First, Buccaneers head coach Raheem Morris went for a two-point conversion to break up a tie with 2:07 left in the game. And you know what? It was awesome.

Even if it meant the home team lost the game, it was great to see a coach acknowledge that no one in attendance wanted to see a weeknight preseason game go to overtime. Sure, it might have backfired on him, but I applaud Morris for the gutsy decision.

And the final play of the evening was the Stallworth touchdown that ensured the Redskins finished the preseason with a 3-1 record. Even if it was a moral victory involving players who were in the final days on an NFL roster (and Stallworth), it was nice to see the young guys have a reason to celebrate on their way out the door.

Finally, here’s a link to my favorite photos I was able to capture during the Redskins-Buccaneers game.

^Like most self-respecting franchises, I opted to rest the starters during the fourth and final preseason game. So the songs for this week’s playlist are brought to you by my wife. Hopefully that explains the bubblegum pop vibe these songs are inflicting upon ‘Skins fans this week.