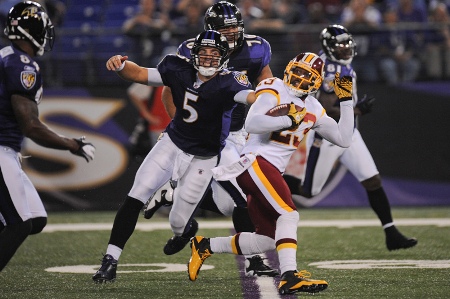 While many fans of the Washington Redskins were downright giddy after the team’s first two playoff* games, I tried to remain cautiously optimistic.

For more than a decade now, my favorite football team has done far more winning in the offseason than in the regular season.

*Fine, they were just preseason games. But they sure did feel like playoff games in D.C.

The Redskins have made the playoffs just twice since 2000, and yet, seemingly every year the desperate fanbase finds a way to talk itself into believing “this year is different.”

Sure, that’s probably because management has usually brought in a new head coach, coordinator or quarterback with the promise of future success, but I’ve been burned too many times to blindly take that leap of faith anymore.

When the Redskins won their preseason opener against the Pittsburgh Steelers 16-7, I chalked it up to catching a quality team on an off night. One week later, Washington won again, but it came at the expense of an Indianapolis Colts team who a.) didn’t have Peyton Manning and b.) couldn’t care less about the preseason.

Sure, that’s two wins over two perennial playoff teams, but I remained unconvinced. In order to believe this Redskins team will be any different than what I’ve been subjected to, I needed to see a similar performance against the Baltimore Ravens in the third preseason game.

Why? Because the Ravens really, really care about preseason games. So much so that they call timeouts with seconds remaining just so they can run up the score.

On top of that, Baltimore has a history of beating down the burgundy and gold during the preseason.

Last year, the Ravens dismantled the Redskins 23-3. The year before was even worse, with Baltimore blanking Washington 23-0. That’s two victories by a lopsided 46-3 margin.

As you know by now, the Redskins got off to a great start against the Ravens, with Baltimore quarterback Joe Flacco throwing an ill-advised pass that was picked off by Redskins cornerback DeAngelo Hall, who then returned it 52 yards for the touchdown.

“We started off a little slow, obviously,” said Flacco, who tried to make up for his poor passing attempt by trying to horse-collar tackle during the return.

The Redskins struck again later in the first period, when running back Tim Hightower took off for a 37-yard score to put Washington up 14-0.

That’s when I joked that the Redskins should no longer be considered the “offseason champs,” but that they should be officially referred to as the “preseason champs.” It was impossible to expect the team’s good fortunes to continue forever, but it was definitely an enjoyable nine quarters of football.

Even though head coach Mike Shanahan continued to rotate Rex Grossman and John Beck in at quarterback, the offense continued to move the ball up and down the field.

The defense, which used to be the strength of Washington’s football team back when Gregg Williams routinely had his unit ranked in the top 10, finally began to show signs of returning to prominence.

Special teams, easily the most erratic unit in Washington, continued to shine with kicker Graham Gano converting his field goal chances whenever the offense stalled.

Any way you spun it; there was a lot to like about the Redskins at that point.

Without a doubt, the best part of the first two preseason games was the fact that everyone managed to stay healthy.

Unfortunately, the same could not be said against Baltimore.

Rookie defense end Jarvis Jenkins, who was the team’s standout of training camp, suffered a torn ACL in his right knee that means he’s done for the year.

It’s a terrible ending to such a promising start for the Clemson product.

“You have a hard time focusing on the game when something like that occurs so early in the game,” said Shanahan. “He’s going to be an excellent player in the NFL. [He’s] everything you look for in a person and everything you look for as a football player. It always hurts to lose a potential great player like that … Things like that happen in the NFL and guys get an opportunity to replace. It’s always hard to replace one of those big guys because it’s hard to find them on the street.”

Injuries are undoubtedly a part of the game of football, but that doesn’t mean fans have to like it. Seeing a highly-touted player like Jenkins shelved for the year before he even gets to play in his first real game sucks.

Here’s hoping the kid is able to recover fully and pick up where he left off this time next year.

4. “Back Against The Wall” by Cage The Elephant

As if losing Jenkins wasn’t bad enough, the Redskins then began to unravel a little bit. Baltimore drives were kept alive thanks to untimely penalties. Sloppy tackling by Washington defenders allowed players like Flacco time to extend plays and find open receivers.

Basically, even though they were up by two touchdowns on the road, the Redskins defense failed to close out an opponent who was clearly on the ropes.

Rookie linebacker Ryan Kerrigan was called for a neutral-zone infraction on 3rd-and-6 from the 8-yard line, making it that much easier for the Ravens offense to stay on the field. A few plays later, defensive lineman Darrion Scott got two hands on Flacco, but couldn’t sack the quarterback.

Moments later, Flacco connected with receiver Lee Evans for a 35-yard score to tie the game at 14-14.

The Ravens had found new life and Washington was suddenly scrambling to recover. Had this happened a year ago, the Redskins would have rolled over at the first sign of adversity.

But there’s something different about this year’s team.

Led by Grossman, the Redskins marched down the field on an eight-play, 80-yard drive that was capped with a 24-yard touchdown pass to wide out Santana Moss.

That drive told me everything I needed to know about the Redskins.

This team has heart. These players don’t give up. This time around, there might be a legitimate cause for the optimism.

But that doesn’t matter. All it means is the Ravens, led by general manager Ozzie Newsome, have much more depth at the moment than the Redskins, who are still in the process of rebuilding from the ground up.

There’s still a lot to like about what Shanahan and friends have been able to do to this roster in such a short amount of time.

Don’t take my word for it, though.

“They’re better than they were last year,” said Ravens linebacker Terrell Suggs, who famously mocked the Redskins for using pitiful players like Justin Geisinger to try and block him.

If Suggs sees enough to be impressed, then who are we to argue? If nothing else, ‘Skins fans can rejoice that the opposition no longer openly mocks the players lining up in the burgundy and gold.

That’s why the Ravens loss was more impressive to me than either of the team’s previous two victories this preseason.

It’s so entertaining, the entrance should earn Lewis a title shot at Wrestle Mania. And this is coming from a guy who couldn’t care less about the Ravens.

Finally, here’s a link to my favorite photos I was able to capture during the Redskins-Ravens game.