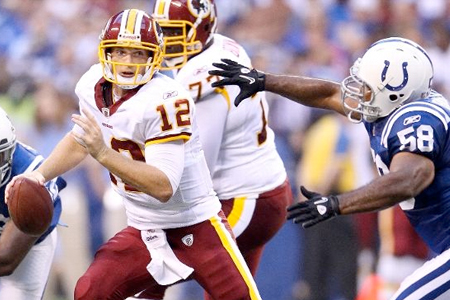 The victory marked the 29-year-old’s first action in nearly a year – with Beck last taking the field in Washington’s 20-10 loss to the Arizona Cardinals in the 2010 preseason finale.

And here’s something to consider: Beck didn’t even start the Cardinals game.

No-name quarterback Richard Bartel got the start that night, with head coach Mike Shanahan content to let Bartel and Beck alternate series while Donovan McNabb and Rex Grossman took the night off with the rest of the team’s starters.

One year later, Beck has suddenly risen to the status of “chosen one,” with Shanahan apparently handing the 30-year-old the starting team’s gig during the lockout.

With all eyes locked on him as he took the field in Indy, Beck played as well as even the most optimistic of Shanahans could have hoped for – completing 14 of 17 passes for 140 yards while leading the Redskins offense to four-straight scoring drives.

On his best play of the night, a 3rd-and-12 with just over five minutes left in the first half, Beck showed why his coaches have so much confidence in a guy who hasn’t started a regular season game since 2007.

With the pocket collapsing around him, Beck stepped up and fired a sidearm pass to receiver Donte Stallworth for a 23-yard gain that kept the drive alive. Any way you look at it that was a big-time play for a guy the Miami Dolphins and Baltimore Ravens gave up on.

Now, before Redskins fans (and coaches, for that matter) get too carried away, I do have one point of contention with Beck’s otherwise stellar performance against the Colts.

In four trips to the red zone, Beck threw a grand total of one pass into the end zone.

Repeat after me: one.

The Redskins finished their first drive with a one-yard run by recently acquired tailback Tim Hightower, but the next three drives all stalled and Washington was forced to settle for field goal attempts.

If Beck wants to win over the burgundy and gold faithful, he’s going to have to do more than dink and dunk his way down the field. ‘Skins fans still haven’t completely forgiven Mark Brunell, who went from the gunslinger who connected with Santana Moss in Dallas to the guy who completed 22-consecutive passes against Houston for roughly 44 yards.*

*Okay, he actually threw for 267 yards that day, but seriously, two thirds of his passes were thrown to targets behind the line of scrimmage.

If Beck wants to be taken seriously by people not named Shanahan, he’s got to stop throwing passes to Sellers and start taking chances downfield. Other than that, there was a lot to like in his 2011 debut.

It should be noted that Beck was able to have such a standout performance thanks, in part, to the running back tandem of Hightower and rookie Roy Helu.

Both backs had a run of at least 50 yards against Indianapolis, and the dynamic duo finished the game with 20 carries for 171 yards and a touchdown.

On the second play of the game, Hightower busted off a 58-yarder that set the tone for the evening. Preseason or not, that run was a welcome sight, but that’s probably because it was longer than any Redskins running play all last season.

Helu followed that up with a 51-yarder on the second play of the second quarter that Colts coaches won’t be happy to re-live.

Just when it looked as though Helu was going to be led out of bounds by a trio of Colts defenders, the Nebraska product tip-toed down the sideline and showed everyone why he’s the biggest homerun threat in Washington’s offense.

Last week, the Redskins coaching staff opted to give fellow rookie running back Evan Royster the bulk of the carries. This week, Helu rose to the occasion and racked up 101 yards on 14 carries while showing he doesn’t need much space to create something memorable.

The Redskins rushing attack was pitiful in 2010. If these first two games are any indication, the ground game should be much improved this time around.

As you know by now, the Redskins defense was awful last year. Well, much like the revamped running game, the defense looks to be much better this time around.

The Redskins defensive players who did suit up were lights out, limiting the Colts to just one rushing yard rushing and one first down in the first half. The Redskins first teamers outgained Indy’s starters 277-41 and ran nearly three times as many plays (41-14).

Through two games, the Redskins’ first-team defense has allowed a grand total of 170 yards and the front seven has already created more consistent pressure than what passed for defense a year ago.

Before folks go overboard there’s something I feel obligated to point out – the Colts have lost eight-straight preseason games, and 24 of their last 28 preseason games.

They mail it in until the regular season kicks off and then they return to their status as one of the NFL’s elite franchises. The thought process has worked for them though, considering they’ve won 10 games or more in nine of the last 10 seasons.

There have been several individual efforts to like through two preseason games, but fans need to be sure they remember that preseason success doesn’t always translate to regular season wins.

Before anyone starts firing up the bandwagon, I’d like to see how the Redskins fare against the Baltimore Ravens in their third preseason match-up.

While the Steelers failed to show up for their opener and the Colts never seem to bother with meaningless exhibition games, the Ravens are the team that called a timeout with roughly eight seconds left so they could add another touchdown to their 31-13 victory over Kansas City last week.

They care about the preseason and Baltimore usually handles the Redskins with relative ease during the preseason.

So if Beck and friends can find the same level of success against Ray Lewis, Ed Reed and Terrell Suggs this week, I’ll be much more inclined to start drinking the Kool-Aid.