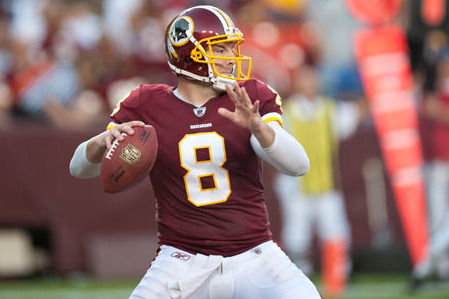 If there’s one thing I’ve learned in the world of professional sports over the last two decades, it’s that the life of a Washington Redskins fan is never easy.

Ever since the fateful day when Hall of Fame head coach Joe Gibbs walked away from the storied franchise (the first time), there have been much more lows than highs for fans of the burgundy and gold.

The last decade in particular has been especially brutal — with the Redskins winning far more often in the offseason than the post season. While the front office was always eager to gas up the jet and chase the stars, the results in the end were almost always disappointing.

Now, Mike Shanahan’s inaugural season in Washington by all accounts was more of the same. The roster featured aging veterans who accomplished much more elsewhere than they ever did here and the Redskins ultimately ended the 2010 season at 6-10.

And yet, all is not lost. It finally appears the front office has seen the error in their ways. No longer were the biggest names in free agency awarded bloated contracts to come to Washington. No longer were draft picks given away like free samples at a mall food court.

No, the current administration finally appears to be embracing the kind of youth movement ‘Skins fans have dreamt of for years and years. Instead of trying to build the best fantasy football roster money can buy, the Redskins are quietly stockpiling lesser-known players to compete for playing time.

The roster, almost overnight, is now full of younger and hungrier players dying for a chance to earn playing time. Washington is no longer the premiere destination for over-the-hill free agents to cash in. It’s a place where unheralded youngsters like Darrel Young are given a fair shot to unseat former Pro Bowlers, like Mike Sellers.

Names don’t matter nearly as much as on-the-field production these days, and that sentence alone is enough to bring a tear of joy to my eyes.

Sure, there are still going to be growing pains as Shanahan and friends look to overhaul a roster from the ground up, but it’ll be a lot more encouraging watching this team than anything we’ve seen in recent history. Even if they go 6-10 for a second-straight season, at least they’ll be doing it while developing the next wave of players who will hopefully carry the load.

At least, that’s my take heading into the 2011 season. I’m not booking a flight to Indianapolis for the Super Bowl or anything, but I’m not blindly writing this season off either. Apparently not everyone feels the same way.

I made the mistake of tuning in to ESPN’s Mike & Mike in the Morning yesterday on my way into work. In preparation for the upcoming NFL season, they’ve been spotlighting all 32 teams in a segment called “Two-a-days,” and I just so happened to catch their “expert” analysis on the Redskins.

Look, there’s a reason why I try to avoid ESPN whenever possible. The self-proclaimed Worldwide Leader of Sports is filled with talking heads all trying to talk louder than the guy sitting next to them. And yet, while each of them is rambling at full volume, none of them everhave anything of substance to say.

Case in point, here’s what Mike Greenberg had to say about the Redskins heading into the segment:

“The Redskins had a very bad year last year,” Greenberg said. “They lost a lot of big-name players who didn’t play well. Donovan McNabb, Clinton Portis and Albert Haynesworth among them.”

He then named some of the newly-acquired players, such as Barry Cofield, Jabar Gaffney and Donte Stallworth and pointed out that they’re not as big of names as those who were in town last year.

Greenberg didn’t follow that up by saying something along the lines of, “The Redskins seem to finally be steering clear of big name players who fail to live up to their end of the bargain” or anything like that. He just wanted you to know that Cofield, Gaffney and Stallworth didn’t have the same star power as McNabb, Portis and Haynesworth.

From there, the Mikes then asked and answered five questions about the 2011 Redskins, which I’ve included below. And since they basically mailed in the entire segment, I figured I would actually try to put some thought into tackling the topics at hand.

With out further adieu, here are the five questions guys named Mike have for this year’s Washington Redskins:

1. Do you have any confidence in the Redskins quarterback depth?

“No, I don’t at all,” said Mike Golic. “Rex Grossman, I had issues with when he came out as an NFL quarterback out of Florida, so I don’t believe in him. John Beck? What do we know? John Beck hasn’t played since 2007, and if he’s not injured, he’s going to be your starter.”

While no one other than Mike and Kyle Shanahan is running off to purchase a John Beck jersey to wear on Sundays, I continue to have no problem with their approach to the current quarterback situation.

The coaching staff knows what they have in Grossman. This is his third consecutive year in this offense and his strong showing against Pittsburgh in the preseason opener showed that Grossman is capable of being effective as the starter.

So why not throw Beck into action and see if the guy is actually any good? What’s it going to harm?

If he excels, then you’ve got yourself a diamond in the rough. If he fails, then you’ve got Grossman waiting in the wings. These two aren’t ever going to be confused for Tom Brady or Peyton Manning, but they’re both players who this two-time Super Bowl winning coach has confidence in.

If Shanahan would rather roll with a Beck-Grossman combo platter rather than signing Matt Hasselbeck or Vince Young, then who am I to argue? If he wasn’t sold on Blaine Gabbert, Ryan Mallett or any of the rookies available in this year’s draft, then why reach and risk setting the franchise back another five years or so?

Clearly I’m not as confident in Beck as the coaching staff is, but I’m fine with him being given a fair shot. And if he can’t seize the opportunity, then I’m fine with Grossman holding down the fort.

The Redskins are trying to get away from chasing the stars, so rolling the dice with guys who might not sell a ton of jerseys isn’t nearly as big of an issue with me as it appears to be with ESPN talk radio hosts.

“Ahhh … we’ll see,” Golic said, which is clearly why he makes the big bucks.

Even though Mike & Mike weren’t interested in further discussing the topic, there’s been a lot of emphasis placed on improving the front seven this offseason. Defensive linemen like Barry Cofield and Stephen Bowen were acquired in free agency. The team’s top two draft picks were used on Ryan Kerrigan, who excels at rushing the passer, and Jarvis Jenkins, who has an explosive first step off the line.

That’s a stark contrast to a season ago when Haynesworth refused to do what the coaches asked of him and Maake Kemoeatu was injured and ineffective. When there’s a gaping hole in the heart of your defense, it’s tough to actually make many plays.

Thankfully, those days should be a thing of the past. I would argue that more attention was paid to improving this area of the team than anywhere else on the roster. Add this new infusion of talent to the likes of middle linebacker London Fletcher and outside linebacker Brian Orakpo and the Redskins should be a lot more respectable up front this season.

Will the defense bounce back into the top 10? That’s tough to say. But it’s not difficult to envision them ranking in the top half of the league rather than in the bottom two.

3. How will the addition of Tim Hightower improve a run game that ranked 30th in the league in 2010?

“We know that Shanahan likes to run. We saw what he did with the Denver Broncos,” Golic started. And then he rambled on, lost focus and ended with “Hightower hasn’t set the world on fire.”

And yes, this is what passes for entertainment with the four-letter word.

Look, will Hightower compete with Adrian Peterson this season for the rushing title? Probably not. But does he possess a skill set that can be of value to this offense? Absolutely.

Ryan Torain is a fragile little snowflake and Roy Helu is a rookie who comes into the season without the benefit of a full offseason to learn the system. The fact that Shanahan was able to acquire Hightower for a past-his-prime veteran like Vonnie Holiday, who wasn’t going to make the 53-man roster anyway is commendable.

If we’re being honest, all Hightower has to do is make the team and he’s giving you more than the guy he replaced. If the 25-year-old can consistently keep two hands on the football this season, he’ll likely be the starter and he’ll more than likely be more productive than what Washington got from the position in 2010.

Considering the Redskins got him for nothing and are paying him little more than that, anything Hightower does this season should be looked at as a bonus.

4. After recording 19.5 sacks in his first two seasons, has Brian Orakpo established himself as one of the NFL’s most dominant defensive ends?

“I would say more dominant – not most,” Golic said.

And I would say that Orakpo isn’t actually defensive end. He’s a linebacker. But never let the facts get in the way of a good story, right?

Orakpo has been everything Redskins fans could ever dream of since coming to town. Even last season, when there wasn’t much to be happy about, the 25-year-old was one of the lone bright spots in Washington.

Whether or not the former Texas Longhorn deserves to be placed in ESPN’s top 10 pass rushers or not is irrelevant. The guy is really good at what he does and is still getting better.

*With four of those sacks coming in a single game against fatty JaMarcus Russell and a terrible Oakland offensive line.

If Orakpo can find a way to be more consistent throughout the season, the sky is the limit for Washington’s best player.

“I don’t see them getting out of last place and I actually see them losing a game,” Golic said. “I just don’t trust their quarterback position right now.”

Both agreed that the Redskins would go 5-11.

At gunpoint, I’d say the Redskins finish 7-9 this season. The early part of the schedule appears to be favorable and the roster seems much more capable of being competitive this year.

But honestly, the fact that the front office is finally embracing a long-overdue youth movement is more than enough reason for me to tune in this season.