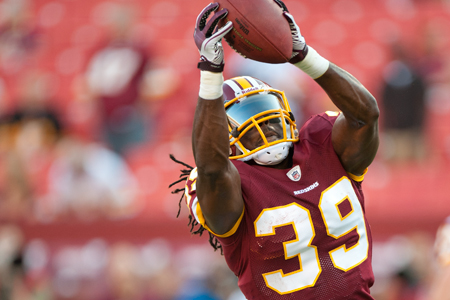 Tonight the Washington Redskins take on the Indianapolis Colts in their second preseason game of the season. Once this game is in the books, we’ll be at the halfway point of the exhibition season and one step closer to the 53-man roster.

With that in mind, I humbly present to you my take at the top 10 Redskins players over the last seven days. For those who aren’t familiar, these are the players who have risen to the challenge and made a strong impression thus far.

1. Tim Hightower, running back – It’s insane to think that a guy who wasn’t even on the roster at the start of training camp could very well be the starting tailback Week 1 against the New York Giants.

It’s even crazier to think that the Redskins were able to acquire a potential starting running back for Vonnie Holiday, a past-his-prime defensive lineman who wasn’t even going to make the team this year.

2. Rex Grossman, quarterback – The Shanahans might have a ton of manlove for John Beck, but Sexy Rexy isn’t lying down without a fight. Grossman completed 19 or 26 passes for 207 yards and a touchdown (109.0 QB rating) against the Pittsburgh Steelers, and looked very comfortable in his third year running this offense.

The pressure is clearly on Beck to show he’s worthy of being in this quarterback competition when the Redskins take on the Colts tonight. A poor performance is only going to re-enforce the popular belief that it’s only a matter of time before Grossman is lining up behind center for Washington.

3. DeJon Gomes, safety – Seemingly everyone else at the safety position is either injured (LaRon Landry, Oshiomogho Atogwe and Kareem Moore) or struggling (Chris Horton). So all Gomes has to do is be healthy and not make any monumental mistakes and he’s in solid shape to make the cut.

Thus far, Gomes is doing even better. The fifth rounder picked up his first-career sack against Steelers quarterback Dennis Dixon and had three tackles for a loss for the night. Not bad for an unheralded rookie who most Redskins fans had never even heard of before draft day.

4. Jarvis Jenkins, defensive end – Dude still doesn’t look like a rookie out there on the football field.

5. Will Montgomery, center – Let’s just say that whenever Casey Rabach was asked to line up against someone as talented as Casey Hampton, he spent enough time in the backfield to warrant consideration as a backup running back.

Thankfully, Montgomery appears to be a much stronger option up the middle and if he continues to play at this level, Redskins quarterbacks might actually have time to look downfield rather than the dinks and dunks that passes for an offense last year.

Whether or not John Beck can complete a deep throw during live action is another question, but at least the Redskins starting center will give him a chance to make the play.

6. Evan Royster, running back – Roy Helu Jr. gets much more attention, but Royster was the rookie running back who Mike Shanahan opted to turn the football over to in the opener.

Royster finished with a game-high 15 carries for a game-high 66-yards rushing on the night, while Helu was limited to just 28 yards on eight carries. Whether or not it lasts remains to be seen, but as long as the Penn State standout makes plays like this, it’s going to be difficult for his coaches to ignore the rookie.

7. Keyaron Fox, middle linebacker – The guy has been in Washington for about 10 minutes and yet, there he was, lining up his teammates and running the defense against his former team. He’s not going to unseat London Fletcher or anything, but it’s nice to see that the eight-year-pro has already earned defensive coordinator Jim Haslett’s trust.

8. Darrel Young, fullback – Right about the time Young made his 16-yard catch-and-run in the preseason opener, veteran Mike Sellers began to wonder just how tough it is to sell a house in this market.

9. Ryan Kerrigan, outside linebacker – The first-round pick still looks completely lost when dropping back into coverage, but he’s a natural pass rusher. He might not have the impressive resume that veteran Andre Carter* has, but he looks like he’ll be a strong compliment to fellow linebacker Brian Orakpo.

*Moment of silence for my fallen homie.

10. Terrence Austin, receiver – The second-year-pro is the textbook definition of solid, but unspectacular. While Brandon Banks is the flashier of the little people, Austin is the more dependable. He’s also not one-dimensional – meaning he could actually be utilized on offense, as opposed to just special teams.

(Tie) 5. Malcolm Kelly, receiver – Is there anything else to be said about Kelly at this point? The guy practices with the Redskins as often as I do, and we have one more thing in common: neither of us are making the team.

(Tie) 5. Josh Wilson, cornerback – The nicest way I can put it is Wilson did not make a strong first impression in his burgundy and gold debut. The former Maryland Terrapin was beaten more than he’d like against the Steelers and is now sidelined with a hamstring/groin injury.

4. Brandon Banks, receiver/returner – Against Pittsburgh, Banks returned a kick 58 yards and a punt 19 yards. Both were the longest in the game by either team. Unfortunately, since then, Banks has been out with a knee injury.

The dynamic returner’s injury is apparently serious enough that he had to make a trip to see Dr. James Andrews, the same doctor who performed surgery on Banks’ knee last November. There’s no doubt that Banks can be electrifying when he’s got the football in his hands.

No, the doubts are simply about whether a 5-foot-7 and 155 lb. man can survive a full season in the NFL without being broken in half.

3. Rocky McIntosh, inside linebacker – The 28-year-old didn’t have a bad showing in his preseason debut, but he still makes the list after some troubling off-the-field news hit earlier this week.

McIntosh and about 70 of his Miami teammates were named in a scandal that has rocked the world of college football. While some of Rocky’s teammates scored fancy cars and evenings with prostitutes, the six-year pro is said to have received $500 in cash, drinks and “entertainment” at night clubs and on a shady guy’s yacht.

Nothing earth shattering, but McIntosh makes the list because everyone at Redskins Park surely wishes his name was never mentioned.

2. Shayne Graham, kicker – The Former Virginia Tech standout was so pitiful against the Steelers that I halfway expected the coaching staff to cut him at halftime. The only way he could have turned in a worse performance in his Redskins debut would have been to run onto the field and tackle Banks during his 58-yard kickoff return.

1. James Davis, running back – The only running this guy did was home. Because no one likes a quitter, we finally have someone other than Kelly locked into the top spot.