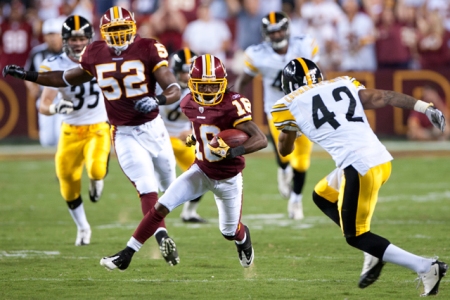 There will be plenty of intrigue and noteworthy subplots between now and the start of the regular season for the Washington Redskins.

The question of who will be the starting quarterback – John Beck or Rex Grossman – for the season opener will garner the most attention. It’ll also be interesting to see how many of the team’s 12 rookies will make the final 53-man roster.

But one of the position battles that’s most interesting to me is taking place at receiver, with several fringe players doing their best to stake their claim to a spot on the roster.

It’s safe to assume that the top three wide outs will be Santana Moss, Anthony Armstrong and Jabar Gaffney.

If that is indeed the case, the passing game should be in much better shape than a season ago – when over-the-hill players like Joey Galloway and Roydell Williams conned their way into a paycheck.

The next two names on the depth chart will likely be Leonard Hankerson and Niles Paul, both rookies who might not put up monsters numbers this year, but should become more involved in the offense as the season progresses.

And that brings us to an interesting question – will the Redskins keep more than five receivers? The only way I see it happening is if the sixth and final player on the depth chart is a special teams guy.

That would leave three players fighting for one possible roster spot, and a case can be made for each of them.

First up is second-year player Brandon Banks, who has already become a fan favorite thanks to his abilities in the return game.

Banks might be a receiver with just two catches for 10 yards on his resume, but he’s the most exciting return specialist in Washington since Brian Mitchell. He might only have one kickoff return for a touchdown to his credit, but Banks is someone opposing teams must gameplan for.

Look no further than Washington’s 16-7 preseason victory over the Pittsburgh Steelers. Banks returned a kickoff 58 yards and a punt 19 yards, both the longest in the game by either team.

Plays like those can make a huge difference – especially when the offense is still such a work in progress. That being said, I wouldn’t consider the 23-year-old a lock to make the roster by any means.

Generously listed at 5-foot-7 and 155 lbs., Banks is rarely 100 percent healthy. He might be an elusive runner, but a guy that small is going to take some serious punishment once defenders finally catch up to him.

Add to that the off-the-field concerns that come when a young and immature player gets stabbed in the abdomen because he decided to mock someone’s attire at a D.C. night club and the question becomes: how much trouble is one player worth?

Sure, Banks is electric with a football in his hands, but how much patience will head coach Mike Shanahan have for an injury-prone player with baggage?

I asked half a dozen media members which player is most likely to end up in Shanahan’s dog house now that Donovan McNabb and Albert Haynesworth are elsewhere and Banks was the unanimous choice.

Those two players were much more accomplished than Banks and they were shown the door. That’s got to count for something in this discussion.

The next player in this debate is Terrence Austin, who is also in his second season in Washington.

The UCLA product, who spent last season on Washington’s practice squad, isn’t nearly as flashy as Banks, but that might actually work in his favor.

While Banks is more of a high-risk, high-reward athlete both on and off the field, Austin is a safer option who is content to fly under the radar and isn’t the type of player likely to end up in a nightclub altercation.

Banks is a one-dimensional* player, while Austin is a more well-rounded product. Banks would be a receiver in name only, while Austin is someone who could actually see his way onto the field with the offense.

*Although, admittedly, he’s really, really good at that one dimension.

Anyone doubting that needs to only look at Austin’s 38-yard catch-and-run against the Steelers. The Redskins offense scored one touchdown against Pittsburgh and it was a direct result of the 22-year-old’s efforts.

Should the Redskins grow tired of Banks, I can see the front office turning to Austin.

The only other viable name on the roster is veteran receiver Donte Stallworth, whose name is bigger than his actual production in the last few years.

Stallworth has just two catches over the last two years, and he’s trying to work his way back into the fold after being suspended for the entire 2009 season by commissioner Roger Goodell.

The 30-year-old pleaded guilty to DUI manslaughter and served 24 days in jail after he struck and killed a Miami man while driving under the influence of alcohol.

Even if you’re willing to forgive Stallworth for that, there’s still the issue of if he’s still got anything left in the tank.

His last five seasons in the NFL have been played in five different cities (Baltimore, Cleveland, New England, Philadelphia and New Orleans). Since four of those five franchises are known for making sound football decisions, the question should be asked:

Why were so many teams willing to let him go?

And, oh by the way, Stallworth hasn’t been used on special teams regularly since 2005. So while Stallworth looked solid in his burgundy and gold debut – catches three passes for 46 yards against Pittsburgh – he’s probably got the longest odds of the three to make the cut.

If I had to take a stab* at how this situation plays out, I’d guess that Banks make the team, but is kept on the shortest of leashes. I can see Shanahan making him the sixth and final receiver because of his skills in the return game, while promising that the first sign of trouble will signal the end of Banks’ time in D.C.

None of this is anything more than my best guess, but that’s how I see things unfolding. Of course, with the new rules marginalizing special teams plays, maybe Shanahan doesn’t even bother keeping a sixth wide out.

Maybe Shanahan feels like teams now kicking off from the 35-yard line will translate to a season’s worth of touchbacks, so it doesn’t matter who is back there. It’s impossible to know for sure.

That’s why, with three weeks left in the preseason, the position battle at receiver is what I’m most interested to see play out.