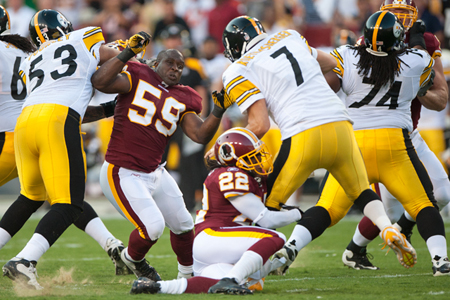 1. “Look At Me Now” by Chris Brown (feat. Lil Wayne and Busta Rhymes)

Plenty of people poked fun at Redskins quarterback Rex Grossman’s appearance once he re-signed with Washington, but regardless of whether or not he could stand to lose a few pounds, the nine-year pro turned in a respectable performance against the Pittsburgh Steelers in his preseason debut.

Against a talented Steelers defense coming off a Super Bowl appearance, Grossman was on target from the first time he took the field. The 30-year-old completed four of five passes for 53 yards on Washington’s opening drive of the game – including a 16-yarder to receiver Santana Moss on a drive that started on the 1-yard line.

“Anytime you start the season backed up on the 1-yard line and get it all the way down to the 10, that’s a good start,” said Grossman, who completed 19 of 26 passes for 207 yards and one touchdown. “We got into a rhythm and pretty much played consistent throughout the first half.”

John Beck’s name might have garnered more headlines throughout the offseason, but Grossman is now in his third season in offensive coordinator Kyle Shanahan’s system. The Redskins went on to defeat the Steelers 16-7 largely because Grossman and friends got the night started off on the right foot.

“I thought Rex did a very good job,” Mike Shanahan said. “He managed the game well. I thought he showed a lot of poise in the pocket. I was happy with the two-minute drive right at the end. He utilized the clock well, and made some good throws.”

Beck will have his chance during the preseason to stake his claim to the starting job, but games like this show why Grossman could ultimately be the team’s starter when the regular season kicks off Sept. 11.

2. “Made in America” by Toby Keith

The Redskins had two priorities this offseason – get rid of the off-the-field distractions that plagued this franchise a year ago and get younger across the board.

Granted, we’re only going off of one game – and it’s a meaningless preseason game to boot – but there were definitely more than a few reasons to be optimistic on this night.

The offensive line, which is still viewed by many to be a work-in-progress, was able to buy Grossman enough time to make those plays. Newly-acquired running back Tim Hightower showed why the front office targeted him – rushing for 44 yards on 10 carries.

Not bad for a guy who the Arizona Cardinals basically gave away for free.

On the other side of the ball, the new and improved front seven was able to get pressure in the Pittsburgh backfield thanks to guys like defensive lineman Stephen Bowen, who did a solid job of winning his one-on-one match-ups.

Earlier in the week, defensive lineman Barry Cofield was vocal about wanting to play, and he made his presence known as well. All in all, the Redskins outgained the Steelers 452-186 on the night and dominated time of possession 39:25 to 20:35.

“Quite frankly, we got outplayed in just about all areas: blocking, tackling, running, throwing, kicking,” said Steelers head coach Mike Tomlin. “That team was better prepared tonight than us.”

Trying to break down offensive and defensive schemes during the preseason can be a fruitless exercise because too often coaches are happy to stick to the basics when the games don’t count. But you can still get a look at individual players and see how they fare.

On that front, it’s so far, so good for the Redskins after Week 1.

Two of Washington’s biggest plays on the night came from two of their smallest players. Mini-mites Brandon Banks and Terrence Austin both turned in strong outings in their quest to make the final 53-man roster.

Austin caught a 38-yard pass from Grossman to set up an 8-yard touchdown pass to receiver Santana Moss and Banks returned a kickoff 58 yards and a punt 19 yards, both the longest in the game by either team.

From where I’m standing, the Redskins seemingly have five receivers set to make the roster: with Moss, Anthony Armstrong, Jabar Gaffney, Leonard Hankerson and Niles Paul appearing to have the inside track on making the cut.

That would leave Austin and Banks to compete with a veteran like Donte Stallworth for seemingly one last roster spot, should Washington opt to keep six wide outs. If Austin and Banks continue to produce like this though, the receiver battle could quickly become one of the most intriguing subplots of the preseason.

During the second half of the Steelers game, I had the chance to chat with a buddy of mine named Jordan on the sidelines. Because the Redskins selected 12 rookies during the NFL Draft, we were debating which of the newcomers we were most excited to see in live action.

I mentioned a name or two of players like Jarvis Jenkins and Roy Helu, who I’m anxious to see over the next month and then asked my buddy for his top choice. His answer cracked me up, which is why I’m sharing it with the class.

“Rookies are a lot like musical acts,” he said. “Fans want to ‘discover’ the next big rookie like he’s an indie band or something, but sometimes you just have to go for the big-name act.”

He followed that up by comparing first-round pick Ryan Kerrigan to Lady Gaga, saying that while it might be trendier to root for a lesser-known seventh-round pick, there’s a reason the front office deemed Kerrigan worthy of the 16th overall pick.

With starters such as strong safety LaRon Landry, free safety Oshiomogho Atogwe and tight end Chris Cooley sidelined due to various injuries and ailments coming into the game, the coaching staff had to be pleased to see the Redskins survive the preseason opener without any new injuries to add to the list.

Considering the length of the lockout and the lack of organized team activities and minicamps, it’s a minor miracle that the rest of the roster avoided the injury bug – especially when middle linebacker/lunatic London Fletcher lost his helmet, and yet, refused to slow down in his pursuit of Pittsburgh quarterback Ben Roethlisberger (as illustrated in the photo at the top of this post).

In related news, Fletcher was the first defensive starter to be removed from the game. It was as if his coaching staff opted to sit him down because they knew as long as he was in the game, the man only plays at one speed.

Guys like Fletcher are far too valuable to risk in an exhibition game, so kudos to the coaching staff for being wise and limiting the chances of losing the heart and soul of the team a month before the season even starts.

Finally, here’s a link to my favorite photos I was able to capture during the Redskins-Steelers game.