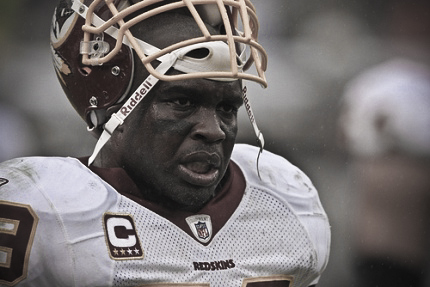 Tonight marks the preseason debut of the 2011 Washington Redskins, as the burgundy and gold host the Pittsburgh Steelers. And while most teams are content to limit the starters to 10 plays or so, this is the perfect chance for fans to see Washington’s rookie and free agents in a Redskins jersey for the first time.

With that in mind, I humbly present to you my take at the top 10 Redskins players over the last seven days. For those who aren’t familiar, these are the players who have risen to the challenge and made a strong impression during the second week of training camp.

1. Barry Cofield, defensive tackle – Clearly, we’re in the honeymoon stage with Cofield, but it’s impossible not to be excited about his arrival. I mean, the guy flat out said he’d be devastated if the coaching staff didn’t let him play a ton in the preseason opener. Considering the drama that followed the nameless defensive lineman Cofield is replacing, that’s more than enough reason to rank him in the top spot.

2. Fred Davis, tight end – While Pro Bowler Chris Cooley has been sidelined with a knee injury, Davis has quietly stepped in and carried the load. Davis is noticeably slimmer this year – having dropped 15 lbs. since last season – and seems dead set on proving that at least one high draft pick from 2008 wasn’t a bust.

3. Jarvis Jenkins, defensive end – The only reason Jenkins drops from the top spot this week is because I’m trying to temper expectations for the rookie. He still continues to stand out for all the right reasons and is the player I’m most excited to see play during the preseason.*

*Even if he’s a Clemson player.

4. Trent Williams, left tackle – The Redskins quarterback situation is far from settled, but at least the left tackle spot is locked down. Williams, who will anchor the Redskins work-in-progress offensive line, remains highly motivated to build off of his up-and-down rookie campaign.

5. Tim Hightower, running back – I’m still terrified of how often he fumbles, but when Hightower is able to maintain possession of the football he’s looked good. With Ryan Torain injured and Roy Helu still learning the offense, the running back position is definitely there for the taking.

7. Anthony Armstrong, receiver – Since last season ended, the Redskins have selected three receivers in the NFL Draft, traded for Jabar Gaffney and signed Donte Stallworth. And yet, Armstrong continues to find a way to stand out and make plays on a consistent basis. He also remains the biggest deep threat in the wide out rotation.

8. Rob Jackson, outside linebacker – He’s not flashy, but the second-year-pro out of Kansas State seems to be doing a solid job of winning one-on-one match-ups and getting into the backfield. If he can develop into a consistent pass rusher, Jackson’s chances of making the team increase dramatically.

9. Kory Lichtensteiger, guard – Typically, when people notice an offensive lineman it’s because he’s screwed up by jumping offsides or got beat by the opposition’s pass rush. The fact that no one is talking about Lichtensteiger says he’s been quietly steady in his quest for a spot in the starting line-up.

10. Chris Horton, safety – The artist formerly known as The Predator needs to have a strong camp if he’s going to survive roster cuts, and he seems to be doing just that. Not a bad week for a guy clearly on the bubble. Unfortunately for Horton though, with the return of Reed Doughty, his roster spot would likely come at the expense of his closest friend on the team, Kareem Moore.

(Tie) 5. Perry Riley, linebacker – Clearly coaches expected him to be further along at this point. Tired of waiting for the second-year player to reach defensive coordinator Jim Haslett’s level of expectations, the team re-signed Rocky McIntosh and acquired Keyaron Fox to compete at middle linebacker.

(Tie) 5. H.B. Blades, linebacker – Put it this way, the only reason anyone has mentioned Blades this offseason is because he had a hissy fit on Twitter.

4. Kellen Clemens, quarterback – I know Mike Shanahan doesn’t like people to write anything negative about a quarterback unless they’re personally invited to break down film with the head coach, but it can’t be good when folks are openly joking that receivers could signal for a fair catch while waiting for one of Clemens’ wounded-duck passes to catch up to them.

3. Leonard Hankerson, receiver – After a strong first seven days, Hankerson didn’t fair nearly as well this week. The Miami product needs to do a better job of creating separation and, most importantly, needs to hold onto the ball more consistently when passes come his way if he plans on earning his coaching staff’s trust.

2. Selvish Capers, tackle – Sure, he was a solid offensive lineman on the blind side in West Virginia, but I just haven’t seen enough from this guy to think he’s worth a roster spot on the final 53-man roster. Honestly, I can’t even say with certainty that the practice squad is in Capers’ future.

1. Malcolm Kelly, receiver – Kelly has officially fallen below the immortal Taylor Jacobs, who once upon a time was known for turning heads and making headlines in training camp. While neither player ever accomplished anything in the regular season, Kelly can’t even get on the practice field anymore.