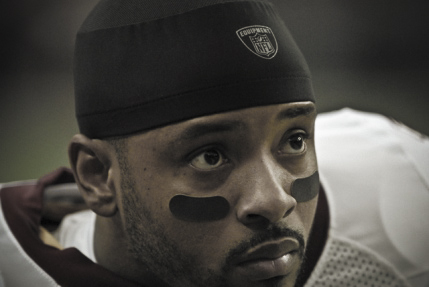 We all know by now that no team makes more headlines in a given offseason than the Washington Redskins – so feel free to take this with a grain of salt – but there’s a lot to like in our nation’s capital after the first 24 hours of the return of the NFL.

Now, as I’ve said throughout the offseason, Moss told me personally that Washington was his first and only choice. He said his family loves the D.C. area and although the Redskins have been known for off-the-field drama more often than on-the-field success during his time in Washington, “the grass isn’t always greener.”

In other cities, a move like this would be automatic. Sadly, the same cannot be said in Washington.

While bringing back one of the most consistent performers should be a “no brainer,” we’re talking about a team that routinely undervalues their players while favoring overpaying for other teams’ talent.

Why reward one of your own top players when you can overspend on someone else’s shiny toy? That’s been the mantra of the Redskins since The Danny came into our lives.

While rumors of Washington still chasing after top free agents such as receiver Santonio Holmes still persist, the front office did the noble thing and brought back Moss, who has managed to remain productive – even though his head coach, offensive coordinator and quarterback seemingly change on an annual basis.

All the while, Moss has remained a model citizen. He never gets in any trouble. He never rocks the boat. He never finds himself in trouble away from the game. The guy just goes out, does his job and then spends his down time with his loved ones.

Now that the 32-year-old Moss, who finished last season with 93 catches for 1,115 yards and six touchdowns, will likely finish his career in the burgundy and gold, the team can focus on other pressing needs – like filling some of the half dozen or so gaping holes in the line-up and finding new homes for Donovan McNabb and Albert Haynesworth.

And if reports are accurate, one of those players could have a new mailing address sooner rather than later.

McNabb seems to be on the verge of relocating to Minnesota, which is an odd destination for over-the-hill quarterbacks, what with the cold weather and all. But who knows? Maybe McNabb can replicate Brett Favre’s success with the Vikings, and more importantly, he would no longer be part of a season-long distraction in D.C.

And for anyone scoffing at the alleged compensation for McNabb (rumored to be a pair of sixth rounders) just remember this: the Redskins would be lucky to get anything for a guy their coach went out of his way to publicly humiliate last season.

Mike Shanahan seems to enjoy making a public example of players who fall out of favor with him. Questioning McNabb’s intelligence and conditioning after benching him against the lowly Detroit Lions last year definitely falls into that category.

So if the guy seemingly means that little to you, why should anyone else give you anything of substance for him? But this is life for the Redskins until the team opts to hire someone in the front office whose sole purpose in life is to protect Shanahan from himself.

The next time he wants to rub a players nose in a perceived failure, the newly-hired front office member* can politely remind the two-time Super Bowl winning coach to bite his tongue until the player is no longer on the team’s payroll.

This, of course, is common sense to the rest of the world, but Shanahan has carried himself as a bully and the world’s worst poker player since the day he took over this dysfunctional franchise.

*Sadly, the Redskins could never simply create this position. They’d have to wait for another team to do so and then hire away said employee for four times his salary. But I digress.

But enough about the “tail wags the dog” mindset of the Redskins. Instead, let’s continue to focus on the future – which always looks brighter in the offseason.

Now that the lockout is over and teams are able to turn their attention to free agency, it’s only a matter of time before Washington starts to spend some of the $25 million or so they reportedly have in salary cap room (that number does not factor in the Moss contract or McNabb’s departure).

And who is the first big winner of the “who gets a fat payday from the Redskins this offseason” sweepstakes? Defensive lineman Barry Cofield, who is set to sign a six-year, $36-million deal.

That might seem like a lot of cash to throw at a 27-year-old interior defensive lineman who has never actually played in a 3-4 defense, but that’s beside the point. This move is actually a good one because: a.) it gives the team a legitimate option other than Hanyesworth at nose tackle, b.) it takes a talented player away from a division rival and c.) Cofield is the anti- “Fat Albert.”

He’s a high-character guy who happily puts in the time off the field that helps players to be more successful on the field. He prides himself on being meticulous in his preparation and he considers himself a “calculated assassin” rather than a one-trick pony who thinks all he has to do is show up on Sunday and the opposition will roll over.

Plus, he’s a guy who the notorious tough New York media awarded the Good Guy award in 2010. So he’s not very likely to bring unnecessary drama to a Redskins locker room who can’t seem to avoid it. That’s gotta count for something these days.

In short, he’s not a perfect fit, but he should be received with open arms on a defense that ranked 31st one season ago. He’s not the biggest name available in free agency, but he’s a guy who the front office targeted to fill a specific need.

And really, for this team, that’s got to be considered progress … at least until Friday when they undoubtedly revert back to the norm.