caps move give fans a lot to laich 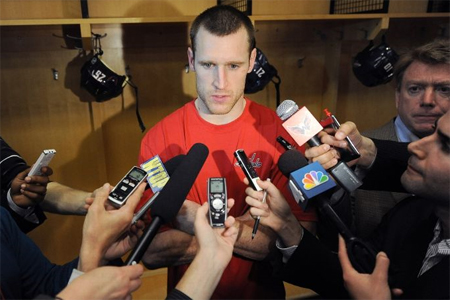 Look, my stance on Washington Capitals general manager George McPhee is well known at this point.

His body of work – especially when compared to anyone else running a professional sports franchise in our nation’s capital – has earned him a lifetime achievement award in my mind.

At this point, I’m thinking GMGM would basically have to show up and punch my mom in the face in front of me to change my tune. (And even then I’d have to wonder what she did to provoke him, but I digress.)

So when I see the two moves that McPhee has pulled off in the last week – namely trading for Troy Brouwer and re-signing Brooks Laich – it only reinforces my belief the Capitals are lucky to have this man calling the shots.

For better or worse, the Caps are a team that excels in the regular season and then falls apart in the playoffs. The San Jose Sharks of the Eastern Conference, if you will.

Well, if that’s the challenge your team is facing, what’s the best course of action?

Do you make radical changes to the foundation of the team by trading away forward/enigma Alexander Semin and/or defenseman Mike Green? Do you stand pat and hope for the best? Or do you look at what it took for a team like the Boston Bruins to win the Stanley Cup and see how you can use that knowledge to benefit your franchise?

From the looks of it, GMGM opted for what was behind curtain number three.

The Bruins didn’t win their first championship since 1971-72 by having more skill players than their opponents. They didn’t take home hockey’s most prized possession because they put together a prettier highlight reel.

No, they won thanks in large part to a white-hot goaltender and a locker room of blue-collar workers who happily sacrificed personal accolades for the good of the team.

Boston won three Game 7’s during their postseason run because when the going got tough, they had the right kind of players who were willing and able to grind it out and do the little things that make a difference in the playoffs.

The Vancouver Canucks had higher-profile players, but the Bruins had players who were harder workers.

Which brings us back to McPhee’s moves in the last week.

Trading away the 26th overall pick for the rights to a 25-year-old power forward who has never scored 20 goals in a season could be viewed as a steep price, but I’m okay with it.

Honestly, the time for stockpiling draft picks has past. Don’t get me wrong – I don’t want the Capitals to suddenly become the Redskins (who never met a draft pick they wouldn’t trade away for a veteran player) – but this team’s window will not remain open forever.

Adding NHL-ready players now makes a lot more sense than drafting some kid who might develop into a contributor three or four years down the road.

Brouwer is a versatile player who can be slotted anywhere in the lineup. He’s comfortable playing either left or right wing and could see action on any of Washington’s four lines. And best of all, he’s a guy who loves to hit people.

“I’ve always tried to be as physical as I can,” Brouwer said. “I’ve learned that for me to be successful I need to be physical. My better games of my last couple seasons have been where I’ve had five, six, seven, eight hits in a game. For me it just gets me into the game, makes me more involved, because if I’m hitting people I know I’m around the puck.”

Having a guy who finished fifth in the NHL last season in hits dished out is never a bad thing – especially on a finesse team that’s been accused of shying away from contact in the past.

My biggest concern with Brouwer when the deal was announced was that he was being brought in as Laich’s “replacement.” That wouldn’t have been fair to Brouwer.

Not only is Laich a guy who excels on both the powerplay and penalty kill. Not only is he a guy who can play anywhere on the top three lines. But he’s a cult hero who is viewed as the heart and soul of this team.

He’s a locker room leader who is always the first guy to stand up and hold himself and his fellow players accountable. Simply put – Laich is worth more to the Capitals than he would be to any other team.

Labeling Brouwer as his “replacement” would only ensure that the new guy was set up for failure before he ever suited up for his first game in D.C.

While yesterday’s announcement that Laich re-signed for six years and $27 million means that one of Washington’s most popular players sticks around for his prime years, it also helps lower the expectations on Brouwer.

Now people will see him more as a possible replacement for Marco Sturm or Matt Bradley, which is a lot less daunting task for a new guy. It also shows the rest of the locker room what kind of players (and what specific skill set) McPhee wants as the building blocks for a team with such heavy expectations.

“We are very pleased to have Brooks Laich continue his career as a Washington Capital,” McPhee said in a press release. “Brooks has excelled as one of the league’s finer two-way players and is just entering his prime. His combination of size, speed, versatility and leadership makes him a valuable part of our club.”

One quick tangent to the vocal minority who has decided to criticize the length or price tag on the six-year deal: if you think Laich wouldn’t have gotten a bigger contract elsewhere, you either haven’t seen this year’s free agent crop or don’t follow hockey.

After Brad Richards, there is serious lack of name players available via free agency this offseason. Regardless of what Laich can and can’t bring to the table, his name has been linked to at least 11 teams and all it takes is one other team to start a bidding war.

Oh, and it should be noted, 25 teams have at least $10 million in salary cap space at the start of free agency. Like I said, it only takes one to jack up the price.

Look at it this way: Laich ranks 44th in NHL with 85 goals over last four years.

In related news, there are 50 forwards with a cap hit of $4.875M or higher. And anyone familiar with Laich’s body of work knows he brings more to the table than just goal scoring.

Had Laich been allowed to walk out the door, it would have been a black cloud hanging over the team’s head all next season. Instead, a proactive move by one of the league’s best general managers ensures that a key player remains in the fold for the foreseeable future.

I’ve got no clue what GMGM is planning next (hopefully it involves locking up Karl Alzner long term, hiding Tom Poti’s body and resolving the Semyon Varlamov situation).

But I have more than a little faith that as long as McPhee is calling the shots, the Caps are a lot closer than any other team in town to changing D.C.’s culture of losing. And as an added bonus, I get to continue selling my website’s most popular t-shirt.

That’s what we in the business like to refer to as a “win-win.”