is the john beck era underway for redskins? 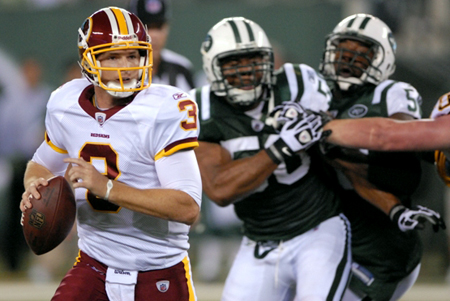 Repeat after me – John Beck is not a savior.

He’s not a gift from the football gods. He’s not the answer to all your hopes and dreams. At best, he’s probably nothing more than an average NFL quarterback.

Which is why it’s baffling to see some fans of the Washington Redskins suddenly acting as if this guy is the second coming of Kurt Warner or something.

The surprising buzz surrounding Beck these days, of course, can only be attributed to head coach Mike Shanahan, who passed on taking a rookie quarterback in the 2011 NFL draft and then followed that up by hyping up the otherwise forgotten signal caller.

While that sounds all great and good, the truth is the quarterbacks selected ahead of Beck in ’07 were JaMarcus Russell, Brady Quinn and Kevin Kolb. Two of those guys are safely labeled as busts, while Kolb will likely be playing elsewhere next season after Philadelphia decided he’s not their quarterback of the future.

So, it’s not like we’re talking about the 2004 quarterback class of Eli Manning, Phillip Rivers, Ben Roethlisberger and Matt Schaub. Shanahan is simply saying he thought more of Beck than a 300 lb. quarterback who ate himself out of the league.

And yet, ‘Skins fans are now trying to talk themselves into believing that Beck is miraculously going to be able to achieve what Donovan McNabb, Jason Campbell and countless others before them failed to do – make the Redskins relevant again for on-the-field reasons.

Give Shanahan credit though – he’s really doing his best to make Beck seem like a legit option.

“I evaluated him throughout his pro career and collegiate career, so I know him quite well,” Shanahan said. “And when you see a guy practice every day, whether it’s your system or against the defense, surely you can see his strengths and his weaknesses. As I mentioned, I told you what I thought about him in college, and he has not disappointed me since he’s been here.”

This brings me to an interesting point. Shanahan’s stance is that Beck has shown him enough in a season’s worth of practices to lead the two-time Super Bowl winning coach to think the guy at least warrants consideration for the starting job.

Which prompted me to ask a handful of Redskins players in the last few days to basically ask the following question – have you ever seen anything from John Beck on the practice field to lead you to believe he can be an above-average starting quarterback in the NFL?

I promised each of them that I’d leave their name out of it; I simply wanted to know from someone closer to the situation if they honestly believed this guy could be the next face of the franchise. Sadly, not one of the players I spoke with could come up with a single play Beck made last season that stood out.

Which is exactly how I feel about the guy. I don’t have an issue with him. I certainly don’t hate the guy. I’ve just never seen anything from him that suggests ‘Skins fans should rush out and order his jersey.

The last time we saw the guy in live action, Beck was alternating series with the already-forgotten Richard Bartel in meaningless preseason action. And since most fans have tried to wipe last season from their memory, I’ll remind you that neither man exactly rose to the occasion.

In fact, if you add up Beck’s numbers for the three preseason games he completed 20 of 39 passes for 235 yards with no touchdowns and one interception. That’s good enough to earn a 59.2 quarterback rating, although a 59.2 and the word “good” should never appear in the same sentence.

I think we can all agree McNabb’s 2010 season was forgettable, and yet, his 77.1 quarterback rating is nearly 20 points higher than what Beck was able to achieve against third- and fourth-string talent. (And that’s before I even point out that Bartel, who failed to make the 53-man roster, finished the preseason with two touchdowns and no interceptions over the same span.)

Sure, that’s not much of a sample size, but look at his career numbers – 60 completions in 107 attempts for 559 yards with one touchdown, three interceptions and five fumbles. That’s good enough for a QB rating of 62.0.

That was back in 2007. Two teams and four years later, Beck is still doing nothing to impress anyone not named Shanahan.

And best of all, we’re talking about a guy who turns 30 in August. So how much time should the Redskins really invest in such a raw product?

Best-case scenario, Beck blossoms into the next Trent Green – a guy who was drafted in 1993, but never had a shot at a starting job until ’98. As a 28-year-old “rookie,” Green seized the opportunity the Redskins gave him and earned an NFL paycheck for another decade.

Can Beck do the same? We’re about to find out.

Shanahan seems intent on giving him a legit chance to be “the man,” but for the sake of the burgundy and gold faithful, I hope there’s a solid backup plan in place if he falters.

I can’t believe I’m saying this, but if it were up to me, I’d make re-signing Rex Grossman a priority. Bring him back – along with receiver Santana Moss and tackle Jammal Brown – and see if Beck can beat out Sexy Rexy for the job.

Neither option is ideal, but the hope is that one of them could at least hold down the fort for a season until the Redskins mortgage their future for a shot at Stanford’s Andrew Luck or another young stud.

If that’s the route Shanahan chooses, then I’ve got his back. But if Beck is given the keys and is the only quarterback on the roster with anything close to NFL experience, we’re all doomed.

Because John Beck is not a savior.

[Update: Here’s an article from 2008 that shows why Miami was willing to give up on Beck so quickly, even after using a second-round pick on him. It seems that simply adding a buzzer into the mix when quarterbacks took too long to get rid of the ball was enough to give Beck fits. Hooray!]

[Update 2.0: For more on this topic, click here to listen to my appearance on 106.7 The Fan with LaVar Arrington and Chad Dukes.]